Cheating just a bit this month as we look to this James Cagney-Pat O’Brien standard with nary a dog in sight to keep Brando happy for the 86 minute running time. That title had him fooled. Not to worry though as we’ve come up with a bit of trickery to put Brando the Wiener Dog right into the cockpit with Cagney prompting O’Brien to give them their final instructions as they take to the skies.

Warner house director Lloyd Bacon was behind the camera for this tale of a cocky and brash Cagney (was there any other kind) who enlists in the armed forces as a pilot under his pal Pat O’Brien’s command. O’Brien who has known Jimmy for years is looking forward to his young friends arrival but is in for a shock when Cagney makes his appearance. Cagney figures in changing the world with his cocksure demeanor and how he can handle an aircraft. In a plane of his own, Jimmy flies over the flight school disrupting a military parade and upon landing has all but embarrassed O’Brien and himself. The problem is he doesn’t realize he’s making a first rate ass of himself. 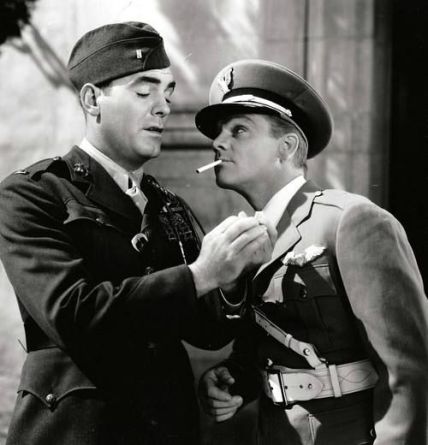 Word gets around the cadet school very quickly that Cagney is an arrogant know it all leaving O’Brien as his only friend and even Pat is second guessing his friendship with the young Cagney. That friendship is to be seriously tested when Cagney begins to move in on Pat’s girl down at the local diner, Margaret Lindsay. Cagney is so pushy with poor Margaret one has to wonder what any woman with half her wits about her would see in this narcistic S.O.B.

While Cagney is disrupting most everything from the cadet training schedule to Pat’s love life that other well known face that turned up regularly with Pat and Jimmy is standing by as the ambulance attendant in search of a patient. It’s Frank McHugh and he’d like nothing better than to see Pat lay out Jimmy with some serious right hooks and left handed uppercuts. McHugh as usual will serve as the comic relief at various points of this 86 minute programmer that casts the leading actors in familiar roles.

Surprisingly these boys don’t fly off to do battle against an opposing military force. The story sticks to the cadet school and offers historians of both film and military history a nostalgic look at some great footage involving planes of the era and training footage mixed with war games that will see Cagney and O’Brien sharing a plane during the exercises. One that will see the boys have to land a plane that has suffered some serious damage during the games. Location filming at a Naval Air Base in Coronado, California only adds to the films historical value.

If these boys can bring the plane in and mend their differences, perhaps they’ll allow Miss Lindsay to pick her pilot for life in the bargain. Cue the well known tune, “From the Halls of Montezuma” over the closing credits. And hey I think Brando and I spotted Ward Bond in there near the fadeout.

Cagney and O’Brien starred in nine movies together and on more than one occasion played similar parts to what they did here. Cagney minus O’Brien played a similar role in the WW2 actioner, Captains of the Clouds. He even stormed a military parade in his bush plane as he did here. I’m a Cagney fan. Plain and simple but looking at this film over 80 years after it’s release I’d be the first to point out his cocky Tommy O’Toole is awfully hard to like. Even at the fadeout which I won’t divulge here. He’s just not likable and what the hell is Miss Lindsay thinking when she’s considering Cagney over O’Brien. Lindsay would co-star opposite Cagney four times. The other three titles being, Lady Killer, G-Men and Frisco Kid. 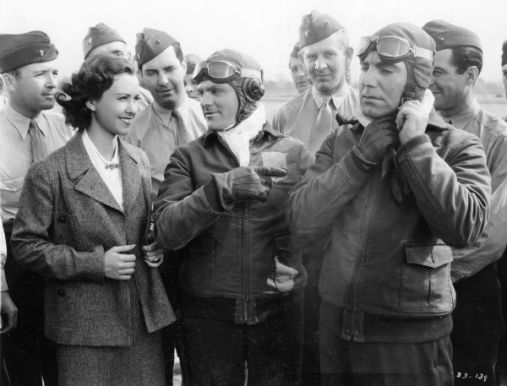 Director Bacon had over one hundred credits to his name including the Cagney-O’Brien pairings, Hear Comes the Navy, Devil Dogs, The Irish In Us and Boy Meets Girl. Frank McHugh? Yes sir. He was in all four as well. The trio of actors would also share the screen in the 1940 war film, The Fighting 69th, under the direction of William Keighley.

Devil Dogs plays TCM on occasion so keep your eyes peeled to the guide as Brando and I did. His first go around and my second or third. I’ve lost count and while little Brando may have been disappointed there were no barking dogs coming from the television screen, he can at least say he’s now seen his first Cagney film.