When the likes of Jean Gabin, Alain Delon and Lino Ventura all share the screen in a crime caper backed by the superb direction of Henri Verneuil and a quirky score from maestro Ennio Morricone, film connoisseurs should rejoice. Pointing their guns directly at those of you who’ve dropped by, if you haven’t made the effort to see this one you should before the starring trio get itchy trigger fingers.

Playing to form, Delon stars as the cold blooded killer of the trio who has arranged to have Gabin’s clan ingeniously break him out of police custody while he’s enroute to prison for a jewelry heist and the killing of two officers of the law. Gabin runs an operation out of an electronics business front along with his sons, wife and daughters-in-laws. They’re discreet and it would seem that the law led by Inspector Ventura have no idea that Gabin is involved in organized crime.

With Delon successfully out of prison, he needs a backer/partner and unveils a plan to Gabin involving a fortune in jewels that are currently on display in Paris. A very dour looking Gabin agrees to look into the proposal and makes contact with the New York mob to see if Delon’s plan has merit. Turns out it doesn’t as it sits but that won’t stop these high stakes gamblers from coming up with an ingenious plan to steal the jewels while they are being transported by plane to New York for their next gala showing.

While these two are combining their efforts to pull off a hijack in mid air and reroute a plane, Ventura is leaving no stone unturned to recapture cop-killer Delon. He’s like a bulldog who is soft spoken when questioning all leads but explosive enough to make all his threats believable if he doesn’t get any co-operation from those who may have information on Delon’s whereabouts. Gabin and Ventura are going to collide when Lino tracks a counterfeit passport operation that just so happens to be working on a set for the Gabin family. Little does Ventura know that Delon is in Gabin’s home when the pair first meet.

I should point out that it’s Gabin’s and Ventura’s understated acting styles that make their scenes together for the balance of the film standouts.

While a noted on screen killer, Delon could also be looked upon as a ladies man so don’t be surprised when Gabin’s daughter-in-law, Irina Demick, finds herself drawn to the dangerous gangster. This will play a major part in the final reel when things get explosive between the wary business partners over their take on the heist. It shouldn’t come as a surprise considering Gabin’s overall opinion of the loose cannon he has taken on as a partner.

Not wanting to play spoiler I’m hoping you’ll seek this title out if you haven’t already seen it before. Yeah the effects are a bit shoddy at times but the gang runs this heist like a military operation and if it wasn’t for the intrepid Inspector and a wife looking for her ………… NO. See it for yourself and be reminded that though this may play a bit gentle and even comical at times, these are hardened criminals with an equally hardened cop playing for keeps when their prize is at stake.

Hey didn’t I spot the western 100 Rifles playing on the in flight movie screen?

For trivia hounds there’s not a lot I can disclose here as I’m no expert in the careers of the three leads other than to say I like what I see when I do come across them in what is usually a foreign film. Gabin dabbled with both Hollywood and Marlene Dietrich back in the 1940’s and if you have a title or two you’d suggest, please send it my way. Though I have seen the odd Gabin film, I’ve plenty to catch up on. 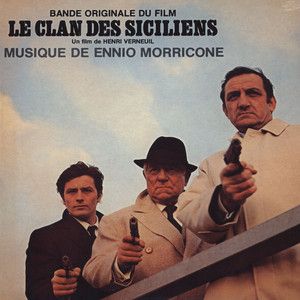 Lino Ventura is another fine actor I’ve only seen in a handful of titles. Among them the English speaking The Valachi Papers and The Medusa Touch. Also the excellent thriller Elevator to the Gallows where he played a similar role as he does in The Sicilian Clan. Same applies to Lino, if you know of some titles I need to make an effort to find, feel free with the suggestions.

Then there’s Mr. Delon who I have seen in a number of titles thanks to his flirting with the North American box-office by teaming with a succession of English speaking actors. Mostly in the 60’s and early 70’s. He appeared opposite the likes of Tony Quinn in The Lost Command, Burt Lancaster in The Leopard and  Scorpio, Dean Martin in Texas Across the River and of course Charles Bronson in Farewell Friend and Red Sun. Liking what I saw, this put Delon in my viewing path as a youngster so I’ve made a greater effort to see many of his foreign language films along with the Hollywood productions. Yes even The Concorde ’79.

Highly recommended, I would encourage one and all to partake in this tasty heist flick with three pros on screen deliciously playing off one another. Thankfully it turned up in a splendid blu ray edition here in North America from Kino Lorber with 2 versions and plenty of extras for the film buffs to take in.