In the same year that saw Glenn Ford star in one of his most iconic films, Fritz Lang’s The Big Heat, he also headlined this minor entry filmed abroad in England opposite French actress Anne Vernon and the always reliable Maurice Denham. 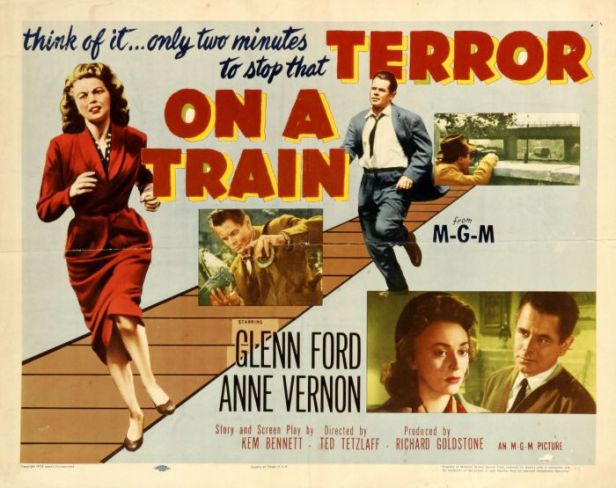 Director Ted Tetzlaff reteams with Ford after pairing with him for the taut thriller, The White Tower, released in 1950. This rather short 72 minute exercise in suspense begins with Victor Maddern targeting a train loaded down with exploding mines meant for the open seas. He’s filmed jumping from a flat bed train car and being spotted by a local police officer doing his nightly patrols around a rail yard. Looking suspicious, he chooses to fight the officer and makes his getaway in the dark leaving behind a bag full of detonators and bomb making devices. Detective Denham is called in to piece the mystery together and targets the passing train as the subject of a terrorist act.

In little on screen time, the train is maneuvered to an abandoned stretch of track and now Denham needs to find a professional to find the bomb on board and defuse it and save the surrounding community from suffering extensive damage from the blast. Someone with steady nerves. Someone who is proficient at coming face to face with death and defusing live explosives. Someone….. oh who am I kidding…. paging Glenn Ford! Paging Glenn Ford! 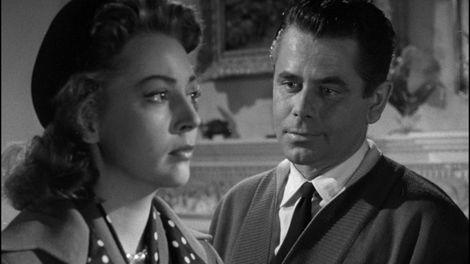 Glenn actually borrows a kernel of truth from his own background here as he plays a soldier of WW2 who has made a life for himself overseas after marrying Parisian Anne while deployed in the war. As in real life, Ford’s character is Quebec born. Yes Glenn really was born in Quebec, Canada, for those unaware. Denham needs a pro and Glenn was a member of the Royal Canadian Engineers during the war. His job? Defusing bombs.

Needing to throw a little melodrama into the script, Glenn and Anne have had an argument and she’s packed her belongings with the intension of catching a train and heading back to France. It’s after she leaves that Denham shows up at Ford’s doorstep and Glenn of course steps forward to do the right thing. By the time Anne has second thoughts and returns to their flat, it’s Glenn who’s gone AWOL. 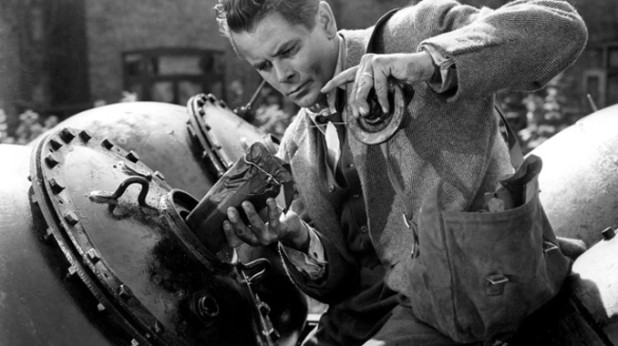 There’s really little else going on for the last half of the film other than Glenn and Maurice going from one mine to another looking for the explosive device and Anne looking for Glenn. Of course Glenn will save the day finding the bomb, Maddern will be brought to justice and Anne will find her man and they’ll live happily ever after. But wait……

What if Maddern set up two bombs aboard the train?

If one looks at the Glenn Ford filmography, it’s almost like the game, “Which one is not like the others.” 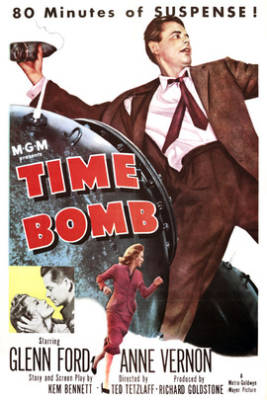 I say that mainly because it’s Ford’s only film at this point in his career that seems beneath a star of his magnitude. That’s not a knock either. It’s just a B programmer that could have starred any number of lesser known box office attractions of the time. He’d just come off a reunion with Rita Hayworth for Affair in Trinidad and according to his son Peter Ford in his excellent biography on his father, he claims Glenn turned down Rita’s desire to have him star opposite her again in her box office hit, Miss Sadie Thompson. Instead he went overseas for this fast paced black and white thriller and briefly palled around with Clark Gable while in England. I would assume Clark was there filming Never Let Me Go which was also released in ’53.

Minor though it may be, this title is a welcome addition to my collection of Glenn Ford films. Ford has long been one of my favorite movie heroes and I have Dad to thank for that and his love of the western being passed on down to me. Terror On a Train plays occasionally on TCM or you can secure a copy through the Warner Archive Collection as yours truly did. 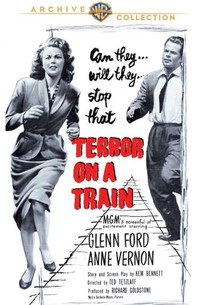