For this Canadian low budget production, we find the burly hellraiser Oliver Reed taking center stage with some able assistance from Peter Fonda as the pair attempt to capture and kill a giant snake with a powerful venom that turns it’s victims into a bloated, bloody mess. When the budget allows it that is.

There is a dash of espionage involved here when a pair of game hunters are staking out a voodoo like ritual on some south sea island where a tribe call forth a giant snake that is generally filmed through point of view angles looking down on the prey that it’s about to strike. Unlike Jaws keeping the shark off screen for quite some time to heighten the thrill, this one is purely due to budget restraints. A good majority of the tribe is attacked until the creature is netted when suddenly…… Dear Ollie awakes in a heavy sweat. Ollie was once attacked by the large predator and with the snake’s venom pumping through his veins, he sometimes finds himself seeing through the snakes eyes when it attacks and kills. It is Ollie who has had the beast captured so that it can be sent by cargo ship to him in the States.

All the while this is going on there is a group of satanic worshippers who want the snake for themselves and send a bumbling rather slobby low life played to great effect by Al Waxman to ensure the cargo is waylaid to their satanic retreat. The late Waxman, a long time actor here on Canadian TV plays this role as if it had been intended for Burt Young or Dennis Franz and had this been a U.S. production with a bigger budget, it’s easy to see one of those two being cast. As it is Waxman is really the film’s highlight and kudos to him.

Reed and his on screen niece played by Kerrie Keane call in psychiatrist Fonda to study the telekinetic link between Reed and the snake. That link is tested when a nosy crewmember on board the cargo ship opens the large crate in the ship’s hold thinking there may be a fortune in drugs within. When his arm takes a severe strike, the bloating and screaming begins before he falls overboard in the dark of night. When the cargo arrives stateside, Fonda sees to it that the giant incubator is sent to the local university where he is employed. All under the watchful eye of Waxman. With pressure mounting on Waxman to deliver the snake to the devilish cult of snake worshippers, he bungles his way into the lab and of course fails to steal the predator but sets it loose after which it promptly kills a series of guards, lab techs and like any horror movie worth it’s genre membership card finds it’s way into the girls dorm. Cue the topless girl taking the shower please.

“Topless girl to the shower set!”

With the snake on the loose this allows Ollie a second chance to hunt down the slithering monster with the enormous fangs that does some bloody damage to all those in it’s path. Naturally our second leading man, Fonda is right behind him. 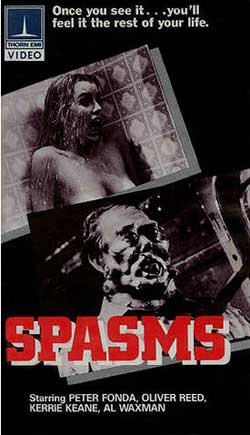 O.K. so it’s not all that memorable but I’d love to see Scream Factory put this one out on some double feature blu ray so I can finally replace the dusty VHS tape I had to go rooting for in the garage to revisit this one. I’ve featured Oliver Reed here numerous times since starting Mike’s Take and this is one title you might have to do some serious hunting for if you want your very own copy. The same can be said for Fonda supporters as well. Unless you want to check out a version dubbed into a foreign language on youtube.

Always hunting for a good Ollie story on set, this one according to Robert Sellers excellent book on Ollie, “What Fresh Lunacy is This?” claims that on a night shoot when set ups were being somewhat delayed, Ollie wandered off into the woods near by and commenced his wolf howling. When a crew member was told to fetch him from the woods, Ollie apparently scared the hell out of the young man after jumping down from the branches of a tree. Naked as the day he was born. Just like we should expect from the notorious Reed. 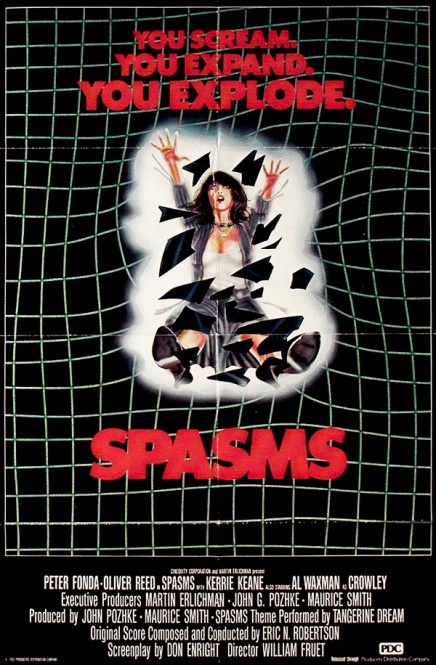 It’s worth noting that Reed starred in another film revolving around a snake on the loose at about the same time as this one, Venom, which cast him opposite that other destructive on set force, Klaus Kinski. The stuff of legends.

While this may be far from Reed’s best films it’s a long way better than some of the wretched flicks he appeared in once his stock had hit rock bottom only to rise substantially in his final film, Gladiator.