This western tale from Universal International takes Fred MacMurray into cattle country where his on screen younger brother, Jeffrey Hunter struggles to man up and be the cowboy he and others around him want him to be. The pair will find out that not all men are cut from the same cloth by the time this cinemascope feature from Abner Biberman comes to a close.

Fred, Jeff and Dean Stockwell are a trio of brothers running the family cattle ranch after the death of their father with Fred taking on lead duties. While Stockwell is a rowdy, hotheaded youngster, it’s the gentle Hunter who their mother played by Josephine Hutchinson wants to send to St. Louis for a better life away from the rough frontier. Fred would rather make a man of his brother and Jeff himself would rather stay and be the man he envisions he can be. There’s a guilt in his conscience that will unveil itself at a key plot point to help us understand his reluctance at taking chances, standing up for himself or letting his fists do his talking. 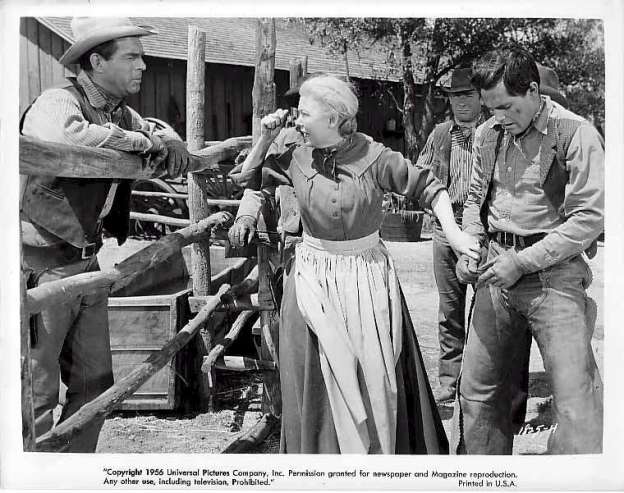 Enter Janice Rule as the girl from the next farm who it would seem is Fred’s girl and expected to marry him before long. (Confidentially I should hope so. The actress was 26 at the time and Fred was 49) In case you’re thinking of it, yes a triangle of love is sure to enter the plot but Hunter’s reluctance to stand up to his older brother and claim Rule as his own is another obstacle he’ll have to overcome on his way to manhood.

Needing to introduce a physical presence to the proceedings, John Larch turns up as a neighbor who sells out to the MacMurray clan but holds no love for Hunter in this man’s world and constantly goads him towards a fight that never seems to come with Hunter doing his best to seek a peaceful alternative. Perhaps a cattle drive might solve his problems with a guilty conscience and allow him an opportunity to be more like his big brother before they run out of open trail.

With these two sure fire problems ahead of them, Hunter is going to have plenty of chances to toughen up.

Gun for a Coward isn’t all that bad of a film but it’s not a rip roaring western tale of gunfights and outlaws so don’t set yourself up for disappointment going in. It’s a drama as opposed to what we’d call an action film today. Admittedly, MacMurray is miscast though that’s mainly due to his age and not the fact that he’s in a western. He looks thoroughly uncomfortable attempting to woo Miss Rule back to his side of the fence from Hunter’s. Might I suggest western regular Rory Calhoun at 35 years of age may have been a better fit. On the flip side, Fred looks fine handling manly duties while in the saddle and brandishing a gun.

A spotlight needs to be shined on Chill Wills once again. Here he’s the old hand around the ranch and a defender of Hunter when needed. Wills is so natural on screen that one almost doubts he’s had to learn lines from a script. He isn’t acting. He just is Chill Wills. Much like Slim Pickens and all those other character players that seem as if they’ve been plucked from the 1800’s and put into the western genre for our pleasure. Chill is given a fair bit of screen time to regale the younger cowboys and us on his amorous adventures and life on the frontier. Tongue in cheek the whole time and never once caught acting. 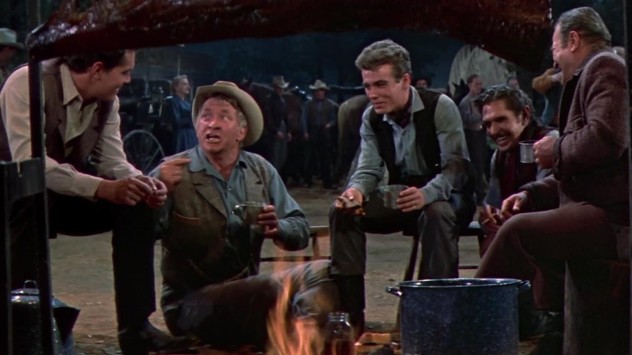 I’d call the ending or perhaps solution a better word a bit of a surprise though there are a couple of obstacles in front of Hunter we know are going to have to be faced including heavy Larch. John Larch made for a good screen nasty when called upon though he really needed a better agent this time out. He’s billed 12th in the credits despite scoring plenty of dialogue and screen time. Above him in 7th place billing is Betty Lynn who gets one line and one blink and you’ll miss it appearance. Perhaps she had some scenes trimmed. You’ll know her as Thelma Lou, Barney Fife’s girl in Mayberry. While it’s too late now, I’d have suggested to Larch he may want to take up with her agent for better billing. 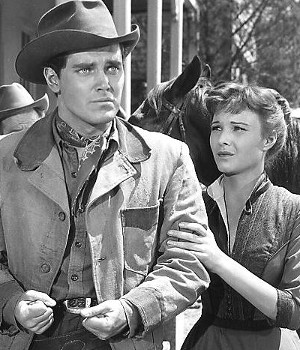 Jeffrey Hunter? He too might have been a shade too old here at 30 but handles the film well and if it’s not to your liking, just grab The Searchers off the shelf and know he’s in one of the great westerns from the legendary John Ford.

Also making an appearance is Iron Eyes Cody in this feature that was part of a Universal DVD release that offers plenty of thrills and stars in 8 films at a super price if you come across it including another MacMurray title, Quantez.