Once again my continuous hunting for movies and memorabilia has unearthed a newspaper during my recent summer vacation to western Canada. In an Edmonton antique mall I came across an edition of the Edmonton Sun and promptly turned to the entertainment section to see what goodies awaited me at the local theaters and drive-ins.

A double helping of Burt? Peckinpah would have caught my eye had I known who he was at the time. The genius of Peter Sellers always a draw and is it wrong to admit publicly I’ve never seen Grease to this day? For those that might think Mark Hamill never appeared in anything other than Star Wars, look no further than this ad and while I may not have attended this theater in Edmonton, Mom did take me to see Don Knotts in Hot Lead and Cold Feet here in my hometown. 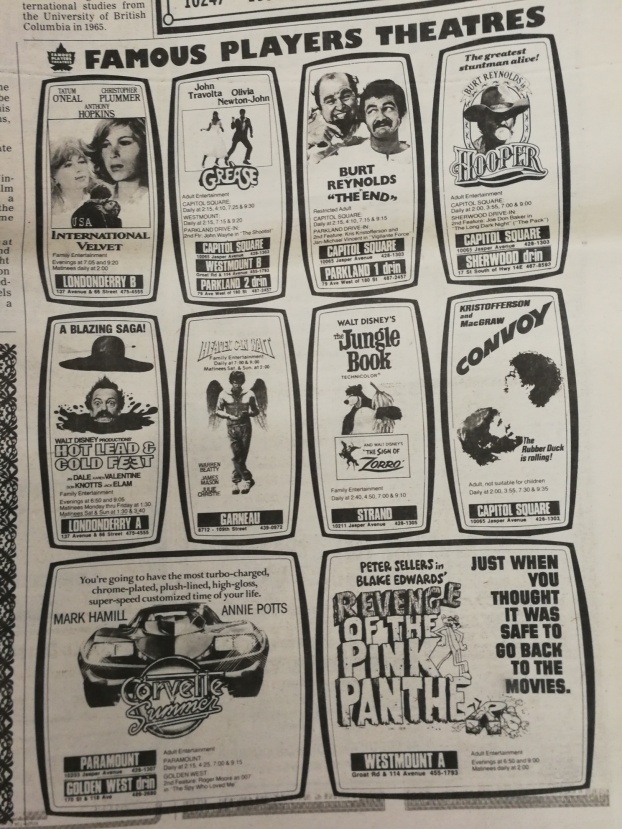 Looking for alternatives we have Faye Dunaway in silhouette, the new film from Walter Hill and how about warring sci-fi flicks for the whole family. Safe to say you’ll find me at Jaws 2. Tarzoon Shame of the Jungle???? Apparently an adult cartoon and the co-feature Angie Baby appears to be a lost film. Checking it out at IMDB, it hasn’t scored a rating as it’s still awaiting at least five people voicing an opinion. I won’t hold out much hope in seeing this Linda Neal starring effort. 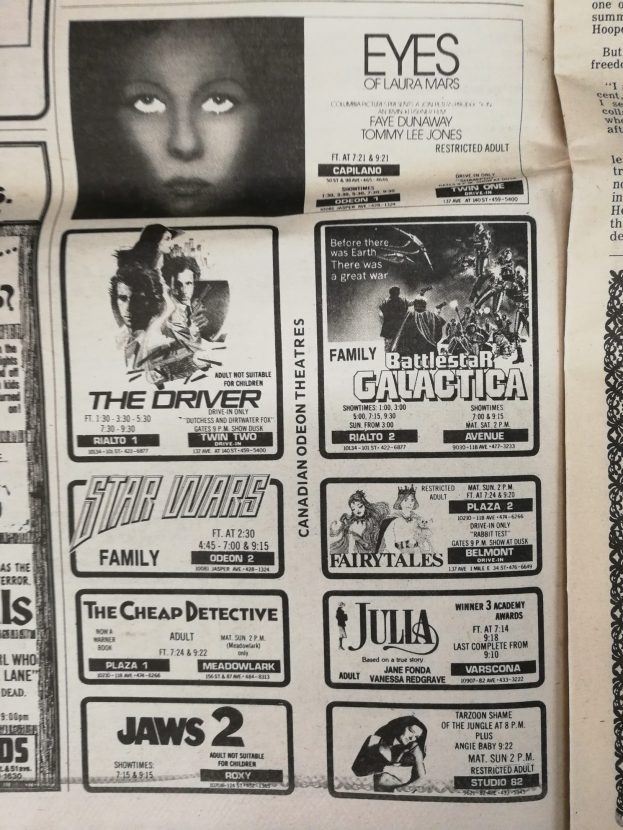 Now for the rowdy party crowd we have a trio of headliners available for this weekend’s pleasure. 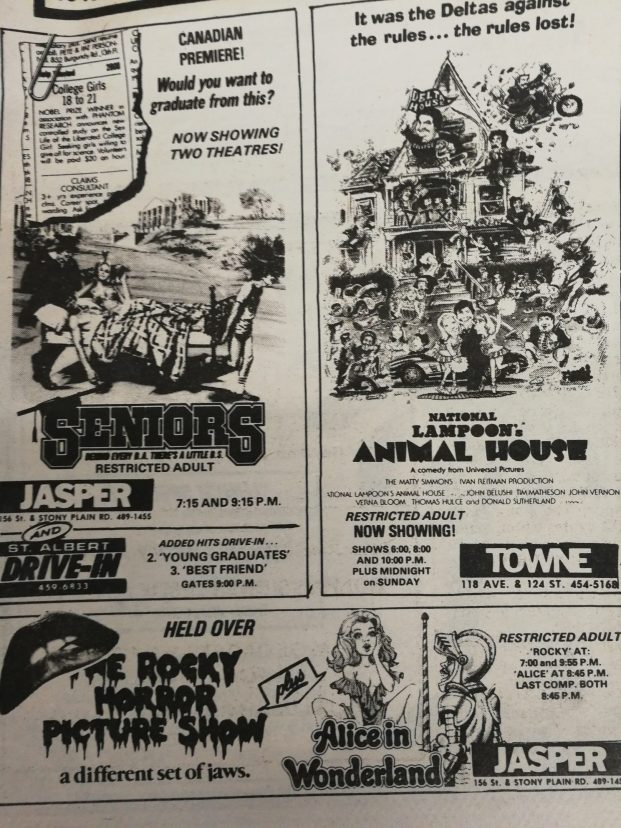 Now let’s focus on what just doesn’t exist anymore. Exploitation films at the drive-in. I haven’t seen any of these and I couldn’t source out Sister In Law so have no idea what it is. Cult fans better bring plenty of coffee cause that final feature, the Specialist stars Adam West along side Christiane Schmidtmer billed as Nude Model. A definite must see! And what’s with that College Girl Ad in the margin? 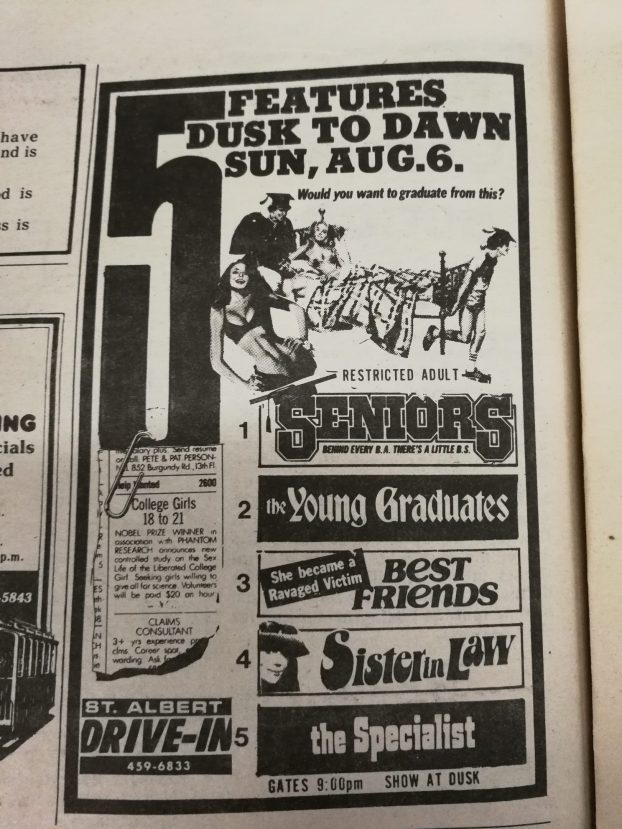 The heck with it. I’m paying my $3.50 admission and head over to the Millwoods double drive in to catch me some fine exploitation titles. I actually recognize some of these and number six of them in my collection. I even reviewed one of them previously…….. click here to see which one.  Given a choice, I’d rearrange things a bit and go with Rituals, a Tony Curtis laugher The Manitou, The Little Girl Who Lives Down the Lane, Blind Rage and Number One Of the Secret Service. The latter two I’ve yet to see but have them on the shelf here at Mike’s Take. Maybe I’d want to add Stunts into my five features and move something out. I’ll know better after seeing it as I secured a copy not long ago. Or how about Nifty 50’s Sweater Girls? I would imagine a popular title with the young men heading to the drive-in that weekend featuring a young Charlene Tilton.

Best film of the bunch? Rituals. A well done thriller if you’re not familiar with it starring Hal Holbrook. It deserves a far better placement here than a 4th string film. 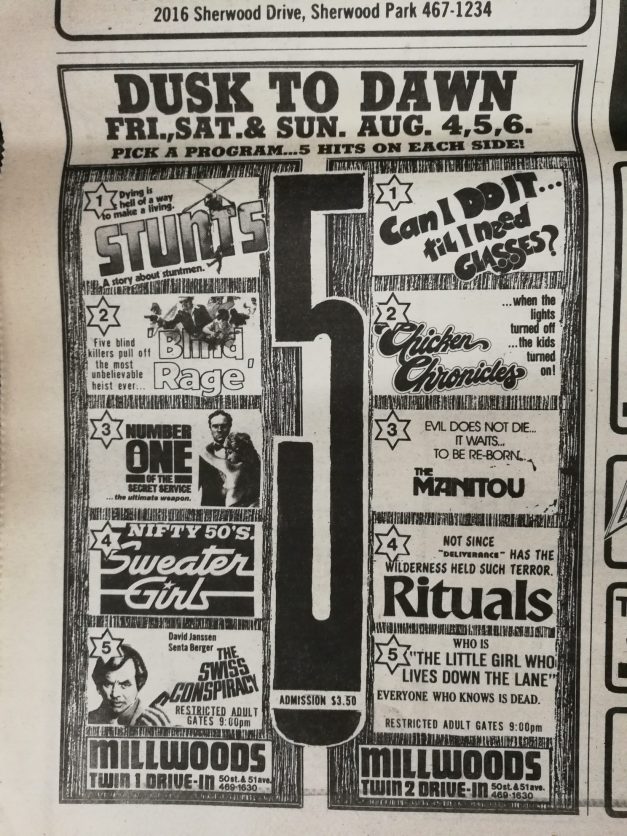 One other booth at that same antique mall had a set of posters I snapped a pic of featuring some long forgotten stars of the B western era. 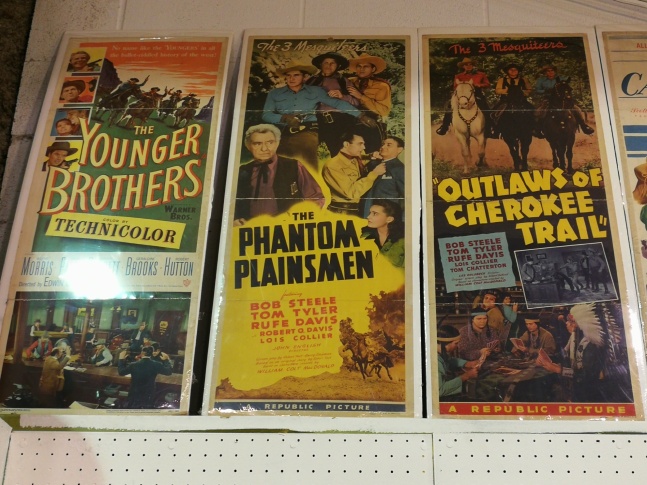 Now playing will return when I locate another newspaper from the past. Previous editions are to be enjoyed here.