Arguably the biggest release on the Warner Brothers schedule for the calendar year and in Warner Color no less, Helen hit the screens minus one notable thing, a definite lack of star power. On the flip side it does have a solid group of character players like Sir Cedric Hardwicke and one actor who’s career was clearly on the rise in Stanley Baker.

It’s the classic story of the Trojan Horse and “the face that launched a thousand ships.” starring Rossana Podesta in the title role. An unlikely choice for a big budget Hollywood production, Rossana didn’t turn out to be a Sophia for world wide audiences before Alan Ladd and the rest of the planet knew exactly what a Sophia really was. Rossana would pretty much return to Italy for the remainder of her on screen career following this Robert Wise directed extravaganza.

With music by Max Steiner and second unit directing duties assigned to famed stuntman Yakima Canutt, Wise filmed the tale of the Trojan horse with Jack Sernas in the other lead role of Paris, the young Trojan prince sent to make peace with the Greeks and Stanley Baker’s Achilles. While enroute by sea from Troy to Greece, Paris and his fellow Trojans are lost at sea but the Gods spare the young prince. Unbeknownst to him he is saved by Greek Queen Podesta, posing as a slave girl along the shores of Greece. To Paris she’s an Aphrodite and the pair in just a matter of screen minutes become lovers. When Paris enters the Greek palace hoping to secure a peace treaty between the two nations, Podesta’s hubby and King, Niall McGinnis sees treachery and adultery in the air. There will be no peace and when Podesta flees to Troy with Paris, Greece launches those thousand ships in pursuit.

When Podesta is brought before Cedric and the rest of Troy, Sir Cedric isn’t exactly overjoyed and nearly banishes his son Paris from the kingdom. Too late though as McGinnis, Baker, Torin Thatcher and Robert Douglas ( a nice quartet of screen nasty’s) have arrived on the shores outside the city and walls of Troy. 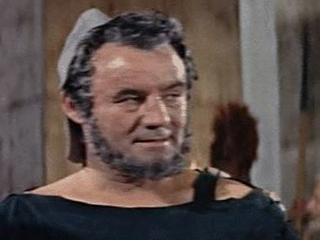 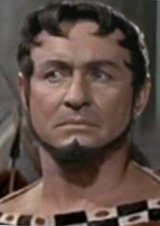 A battle ensues that will last years if I understand the plot correctly. It’s the battle scenes that are the film’s highlights. Swordplay, catapults, arrows and spears are prominently in use as the Greek army attacks the walls of Troy to no avail. Perhaps a duel might settle things. Sure handed Stanley Baker will meet the gentle Harry Andrews on the battlefield via chariots, man to man. Star power will dictate the outcome of the clash.

I’m sure most of you will have heard of the Trojan Horse so I won’t go any further with the plot details. The film was made at Cinecitta Studios over in Rome and though I may be slipping, Brigitte Bardot and her pouty lips are barely noticeable in support of Podesta as her very own servant girl. It would be in the same year of ’56 that Roger Vadim would put the sultry Bardot’s name on the lips of men world wide. I wouldn’t be surprised either if footage or perhaps deleted scenes of carnage and destruction filmed for this title wound up in plenty of the peplum films to come from Italy once the early 1960’s arrived.

The real star of the film is “spectacle”. Something Hollywood and the major studios were heavily marketing during this period thanks to the ever increasing popularity of the TV set. For that reason, our leads are beautiful and the sets dazzling and while there is barely a hint of blood, the battle scenes stirring and packed full of action and fire. One can never help but be reminded that in these early days of history, when an army works hard, it parties hard. That alone may have been the biggest downfall of all in the inner sanctum of the city of Troy.

Should you happen to have, or pick up a copy of the DVD release of this Jack Warner production, check out the fun bonus materials for a nostalgic look at Gig Young doing some infomercials on the film in black and white that were put out on TV, yes those same television sets that films like these were meant to combat.