Perhaps a foot note in the history of gangster films, this prohibition era tale offers plenty of gangland flavor and marks the film debuts of two iconic actors and another in the title role who I’ll admit to never liking very much. 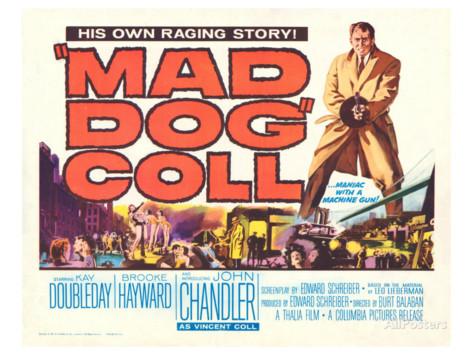 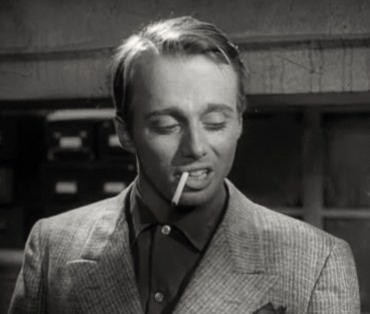 That of a psychopathic killer with the benefit of a Tommy Gun to fuel his rise and attempts to dethrone Dutch Shultz as the number one mobster in the Bronx. Giving us some background as to his direction in life, the film starts with scenes of his childhood living with an abusive Father and becoming a juvenile delinquent during his teen years. It’s at this point that one of our soon to be iconic actors makes his cinematic bow, Telly Savalas. Isn’t it ironic that Telly is playing a police detective who will watch the rise of Chandler’s punk killer with a hint of the  charisma he would deliver in the decade to follow as Theo Kojak. For more on the ultra cool Telly……. click here.

Fast forwarding five years, Chandler is a loose cannon with an inner circle of hoods including yet another young actor who would one day become a very familiar face to television viewers, Jerry Orbach. Staking out Chandler from the shadows of a street corner, Telly moves into to deliver a stern warning to the hood on the rise. Look closely at the patrolman in this scene who gets a few minutes of screen time but no lines to deliver. If it looks like a young Popeye Doyle aka a baby faced Gene Hackman, you nailed it. Gene is the other iconic actor making his film debut here in this Burt Balaban directed gangster tale. Balaban also directed the gangland tale,  Murder Inc. just one year prior to this. 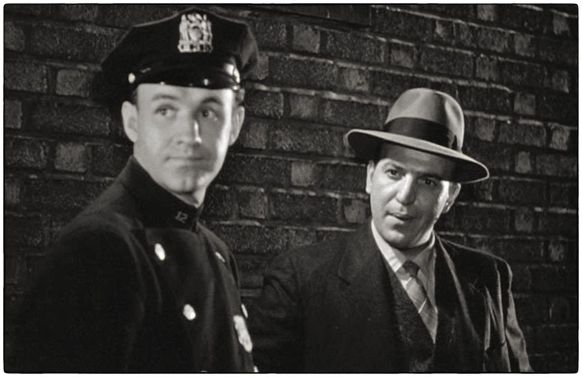 Protection rackets, hijacked liquor shipments, fixed fights and the power of the Tommy Gun put Chandler’s Mad Dog on a collision course with Vincent Gardenia starring here as Dutch Shultz. Each gang in turn will shoot down members of the opposing side. Savalas continues to shadow the Mad Dog and when the papers pick up the nickname, Chandler gives it a bit of the Cody Jarrett flare. As a matter of fact, Chandler may indeed be channeling the great Cagney here but he pales in comparison. Two actresses who play the customary “molls” here are Kay Doubleday as Chandler’s girl who also doubles as our narrator and Brooke Hayward as the woman Chandler desires but loses to the gentler Orbach. 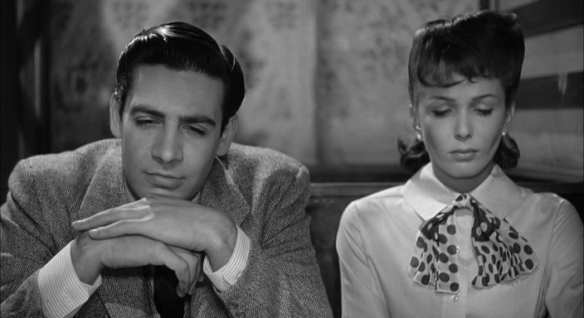 From a brief check on the actual history and demise of Coll, this feature takes plenty of liberties with the facts but that could be considered par for the course when it comes to filming the story of any real life gangster’s exploits. Not that that is of any concern when it comes to movies as entertainment. Is this black and white effort entertaining? So-So I guess but for me the fun comes in watching a cast of young faces who would go on to long careers of varying success. Interestingly, it’s the lead actor Chandler who would come up short career wise versus the other names I’ve mentioned who appeared here despite his having the starring role in what for most of the others are either their debut’s or very close to it.

Why don’t I like Chandler all that much? Of the roles I’ve seen him in, I can’t say I’ve ever liked any of his characters or for that matter, he never captured my interest the way many other screen heavies like Jack Elam, Neville Brand or strangely enough, Telly Savalas did. Hackman is actually unbilled here but would get the last laugh winning two Oscars and becoming the biggest name in movies of those involved here though Savalas would hold his own as well thanks to both movies and television. 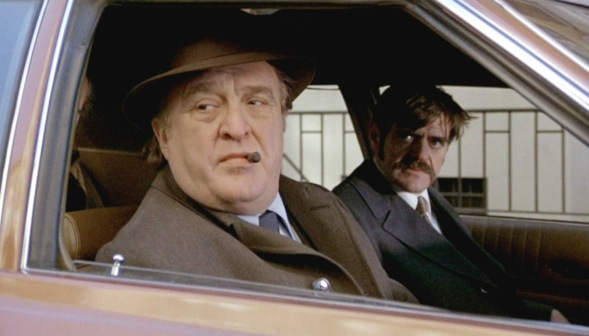 Then there is Vincent Gardenia who for me will always be the sneezing detective hounding New York’s self appointed vigilante in the 1974 hit film, Death Wish.  I can’t say if this Mad Dog is rare but aside from a showing on TCM years ago, I haven’t come across it since. For fans of the actors seeking fame in the years ahead, worth checking out as it is for those who enjoy films like Corman’s Machine Gun Kelly as well.