The melodrama runs high while the penchant for cheesy dialogue rules the day when Miss O’Hara teams with Mr. Chandler for a pair of entertaining adventures meant for a Sunday afternoon double feature. 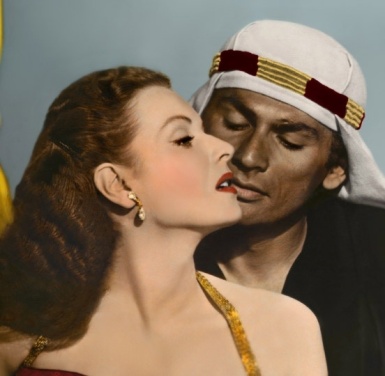 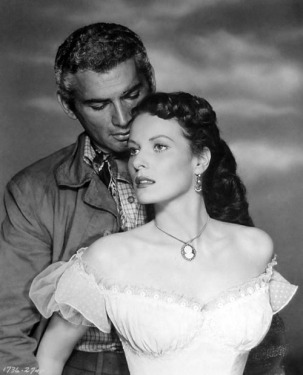 There’s no doubting that these two matinee idols of yesteryear had movie star looks and when splashed about in technicolor are fine examples of actors whose appearances were only enhanced by the process. Maureen with her fiery red hair and penchant for costumes in glorious shades of green. Jeff with his steely silver hair and beefcake physique constantly on display for the ladies. The duo would appear in two films from Universal International in the early 1950’s. Both catered to the popcorn adventure crowd. One a far off “tits and sand” picture as Maureen aptly puts it in her autobiography ‘Tis Herself, the other a western frontier cavalry pic. 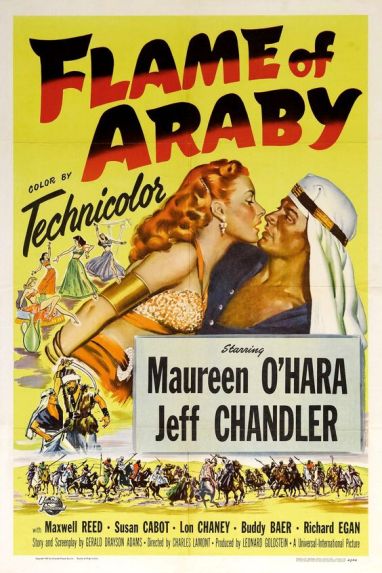 Riding into center stage of a desert backdrop wearing the headdress of a desert warrior is Jeff Chandler flanked by his cohorts, Dewey Martin and Royal Dano. He’s trying to catch a great black stallion and make it his own. As he’s about to finally rope the magnificent animal, a rider shaped like the red haired Maureen O’Hara happens along, falling from her horse into the path of the stampeding wild herd. Jeff makes the decision to save her but once again the stallion escapes his rope. And so begins the flirting and verbal venom the two will unleash  towards each other for the film’s 78 minute running time. 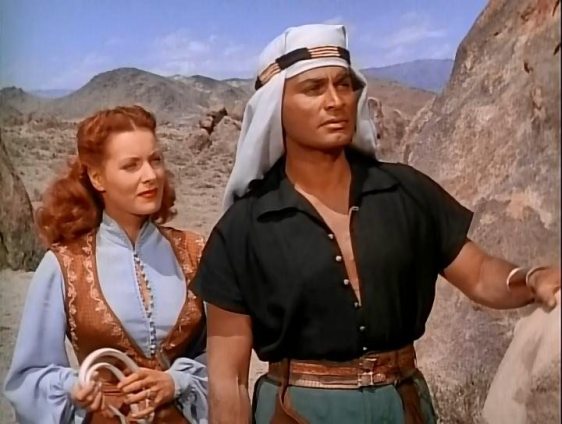 “A wench with temper and sharp claws.” Jeff will point out to his pals while later in the film O’Hara will tell one of her maidens, “I find much to be admired in his untamed spirit.” Just as Jeff wants to coral the black stallion and tame a bit of that wild spirit, O’Hara is thinking the same about her leading man. 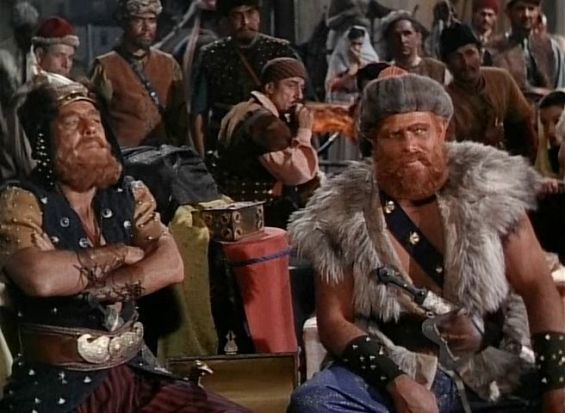 It turns out that O’Hara is a Queen who has been sentenced to choose a husband. Her choices are few. It’s either a heavily bearded Viking like warrior played by Lon Chaney Jr. or his heavily bearded brother, Buddy Baer. Both claim to have the fastest horse known to man, so stalling for time, O’Hara proclaims that a great race will be held and the winner gets to have her. Now if she can just see to it that Jeff catches and rides that black stallion in the race, then she can land the man she has set her sights upon.

I think we can all guess how this is going to play itself out. When Jeff becomes the hunted outlaw for killing one of Lon’s party, he’ll have to sneak his way into the great race after taming the wild stallion he finally corals. It quickly brought to mind the Errol Flynn bit as Robin Hood during the bow and arrow contest. Along with the supporting cast previously mentioned, you’ll spot Richard Egan as O’Hara’s main body guard, Neville Brand who fits right in with the Chaney/Baer crowd, Susan Cabot, Maxwell Reed and as Chandler’s dueling partner, Henry Brandon who would also appear in the star pair’s second go around in a couple years. 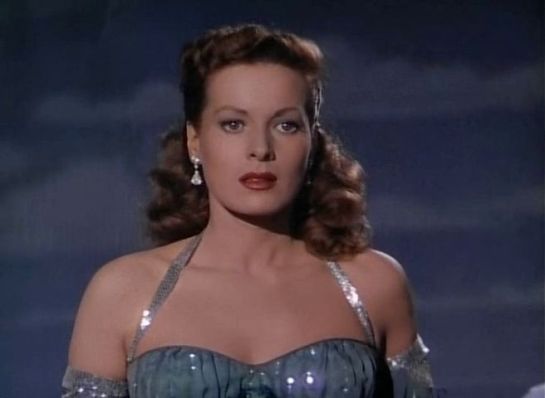 Miss O’Hara looks splendid in the technicolor process and is aided by various costume changes and a swim in a desert valley oasis where she tangles once more with Chandler. Her leading man is really one of those actors who could play most any genre and did. There’s a line that’s rather unflattering in O’Hara’s autobiography concerning Jeff yet when you watch him on camera, it rings of truth. “Jeff was a real sweetheart, but acting with him was like acting with a broomstick.” While this might be true, his screen presence is undeniable and I continually find myself either rewatching his many adventure films or seeking to locate the ones I haven’t yet had the opportunity to enjoy. On the flip side, let’s be honest here, the film genre’s he frequented are generally one’s that I enjoy and when it comes to delivering sappy dialogue, you’d be hard pressed to find anyone who did a better job than Chandler.

In that same book, Maureen also points out that she was more or less forced into the role. It was either that or go on suspension and forfeit her opportunity at the dream project, The Quiet Man. A heartfelt thank you Maureen. Araby was helmed by Charles Lamont. A director known mainly today as one who worked on numerous Abbott and Costello features though he did work with Maureen previously on another one of those “tits and sand” pics, Bagdad in 1949. 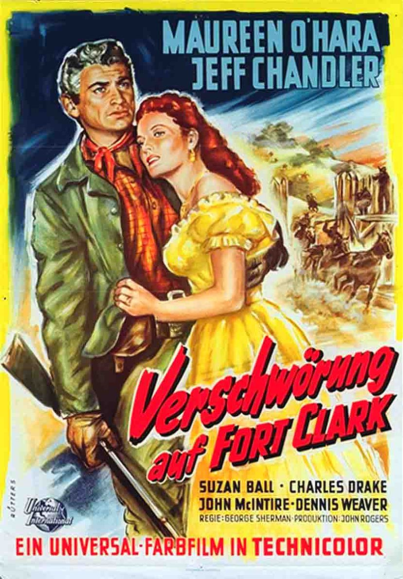 Our technicolor dream stars reunited for a second go around at Universal under George Sherman’s direction for another “B” flick, only this time in the western genre. It’s another tale of the cavalry versus the Indians. Jeff stoic in his blues and Maureen splendid in her greens, a widow and hungering for love.

Like Flame of Araby, this frontier tale begins with Cavalry Officer Jeff riding into center stage with his two charges, Noah Beery Jr. and Charles Drake. The destination is a Fort overseen by Commanding Officer John McIntire. While making their way across the desert plains, they’ll come across a burned out wagon train and corpses littered about. Indians are on the warpath and Chandler has been sent into the territory to aide in the destruction of the Kiowa rebels led by Jay Silverheels. 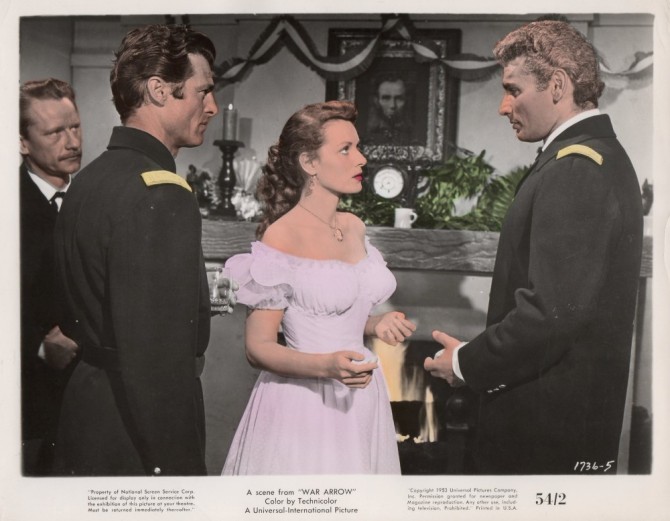 After reporting in to McIntire, the script thankfully plots a dance going on at the Fort on the very night of Chandler’s arrival. Looking splendid and heroic in his blues, in walks Chandler and his eyes lock with Miss O’Hara’s who is fending off the advances of the entire male fighting force. Sweeping the lady off her feet, Jeff swiftly moves her to the dance floor and into his arms. In between romantic interludes, Jeff is convinced that if he arms the peaceful Seminole Indians and promises them supplies and land, they’ll join him in fighting Silverheels and his murderous raiders.

Melodrama is sure to kick in when Jeff and Maureen meet down by the river late at night. ” Everything is dangerous in this country.” O’Hara tells Chandler with a sexual glint in her eye when he talks of the dangers outside the Fortress walls. It would appear that her deceased hubby was killed in an Indian raid and his body never recovered. Perhaps he isn’t dead I think to myself and low and behold, what if he’s helping Chief Silverheels? The Chandler/O’Hara story turns into a love hate relationship for the next half of the film and when Chandler convinces the Seminole Indians led by Henry Brandon and a young Dennis Weaver to aid in the battle versus Silverheels, the film will culminate in an Alamo like battle at the Fort that Commander McIntire didn’t see coming due to his racial attitude towards the peaceful Seminoles. 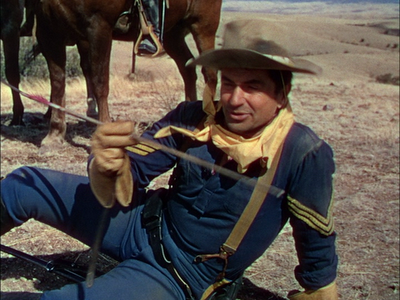 Not a bad oater of it’s type and Chandler once again easily shifts from one genre to another. Adding Beery and Drake as his sidekicks works far better here than it did having Dewey and Royal by his side in Araby. Jeff had previously worked with noted western director Sherman on The Battle at Apache Pass while Maureen worked with him on the swashbuckler, Against All Flags and would play her final film opposite Duke in the Sherman directed Big Jake in 1971. Maureen fairs far better in the earlier film as this keeps her on the sidelines far too much. Especially when we fans know she is a tough minded lady and it isn’t until the final act that she too picks up a gun and pitches in for the fight against the raiding Kiowa warriors.

If you get a chance to see the film, there’s a stunt near the end that looks like it’s gone wrong involving either Maureen or more likely a stunt man or woman wearing her dress. As Maureen’s character is picked up by a raider on horseback she/stunt person goes tumbling into a porch front inside the fort barely escaping the hooves of the horse and looking to cover her/his face as the horse stumbles past. I played it in freeze frame but can’t tell if it’s Maureen or the more likely stunt person. Have a look and tell me what you think. 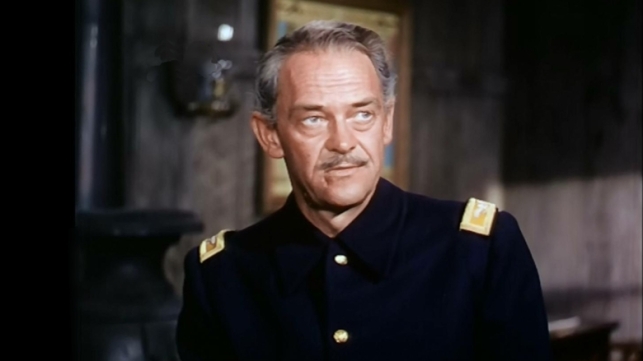 Adding luster to most any film he plays in is John McIntire who here plays it mean versus the genteel character I prefer to see him enact. He’s a racist at odds with Chandler throughout most of the film and there’s even a hint of his longing for the red headed beauty. 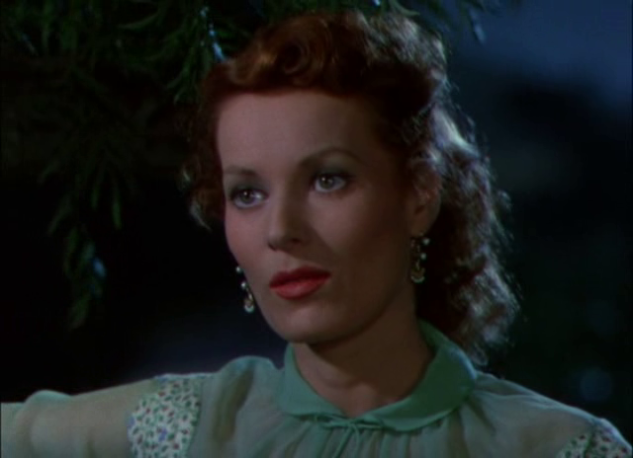 War Arrow is available on DVD if you are in search of this one and as for Flame of Araby, I had to dust off an old VHS copy for this viewing though it has seen the light of day via the made on demand circuit.

Grab the popcorn and settle in for a fun double bill of romance and action starring a couple of technicolor favorites.

Take a tour of the movie room here at Mike's Take where over 10000 titles reside. 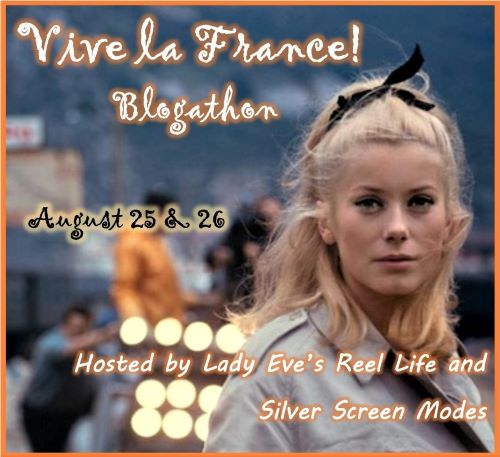 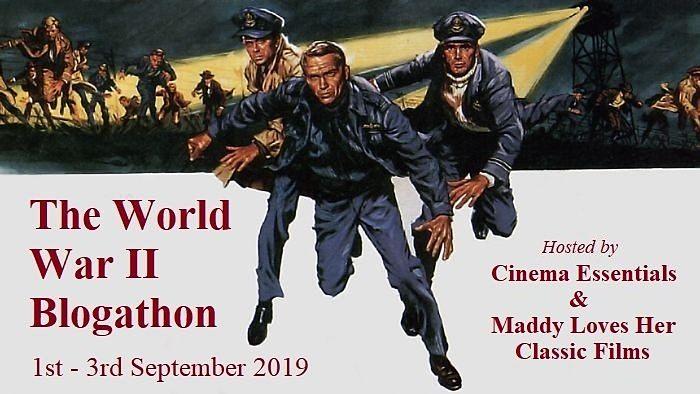 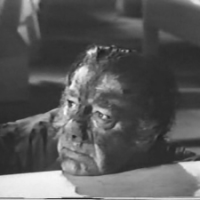 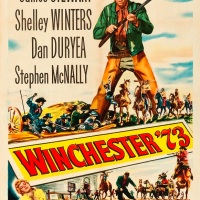 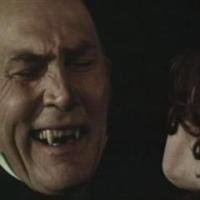 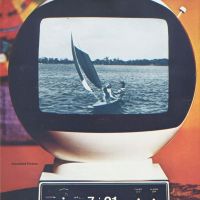 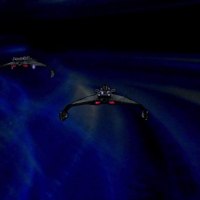 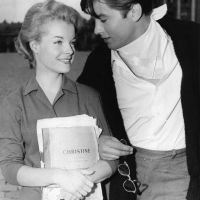