Thanks to Kristina of Speakeasy and Ruth over at Silver Screenings for putting together the Things I Learned From the Movies blogathon, It’s allowed me to focus on a few topics in one essay. My love of Don Knotts and my all time favorite TV show, The Andy Griffith Show. Then there’s The Ghost and Mr. Chicken which has become a classic comedy of the horror genre and the fact that as kids we sometimes have no idea of an actor’s name but easily connect the dots of the shows and characters they portray. 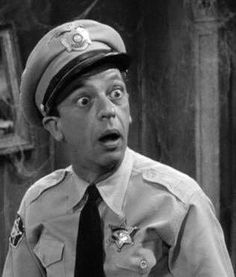 There has always been a bit of Don’s lovable deputy, Barney Fife in practically every role he subsequently played over the ensuing years but when it comes to Luther Heggs of The Ghost and Mr. Chicken, these two are really one and the same.

“There’s nothing to fear but fear itself.”

As a precursor to Don’s big screen adventure in The Ghost and Mr. Chicken, this episode of the classic TV show is one of season four’s highlights. When little Ronny Howard loses his baseball in the old Rimshaw place, he’s off to the courthouse to tell his father, Andy of the strange noises and ghastly sounds he and his friend heard when trying to retrieve the ball. Enter the bigger than life Barney Fife and his take on fear. His brave front is about to be put to the test when Andy with a sly look suggests Barney go find the ball and return it to the boys. The excuses start up. The teasing continues until Don storms off with the classic, “You beat everything you know that!” Luckily, in walks Jim Nabors as Gomer Pyle. The perfect pigeon for Barney to have come along on his haunted house adventure. 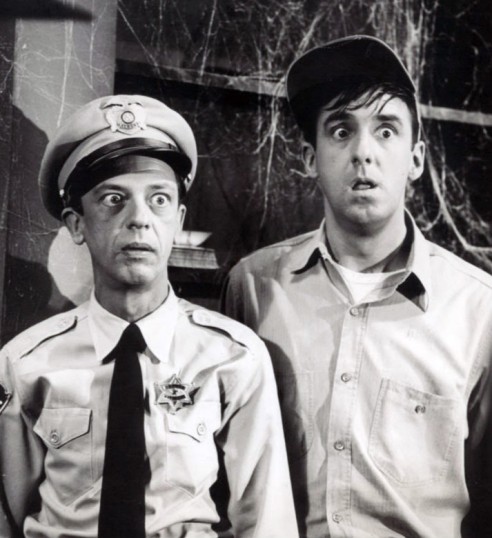 It won’t be long before the two return to the courthouse with a strong case of the shakes. The two funny men are convinced that there are spirits at work in the Rimshaw house that had best be left alone. Otis Campbell, the town drunk confers telling of rumors that include flying axes and spooky goings on. Time for the level headed Andy to take Barney and Gomer back into the house to distill any supernatural beliefs they’ve come out with after their first visit to the abandoned, run down house. 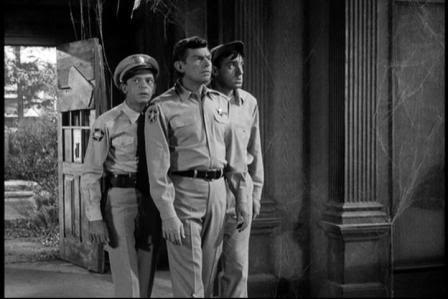 Like many of the episodes to feature Barney Fife, he’ll find the courage deep down inside to face his fears when a loved one is at risk and when Andy seemingly disappears into the supernatural world, Barney is determined to rescue his friend. When the hoax is finally revealed, the tough guy that Barney wants us all to believe he really is comes out. Don Knotts the actor had a great knack for using his body language when attempting to play tough. The shoulders roll, the lower lip juts out in a very pronounced manner and he usually has some strong lines to back up his, “I knew it all along stance.” 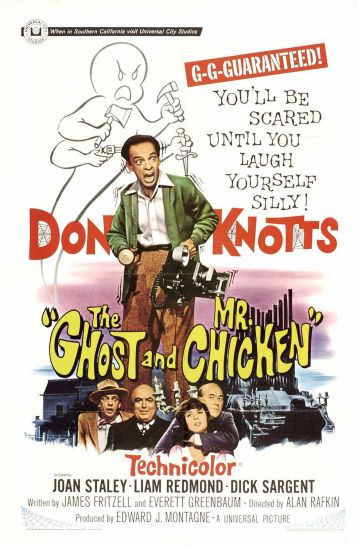 Barney Fife or in this case, Luther Heggs is the name of Don Knott’s excitable character in the same tweed suit with the lovable bow tie and penchant for displaying his karate skills and nervous manner around attractive members of the opposite sex.

Luther Heggs hopes to someday be a first page reporter for Dick Sargent’s newspaper in his home town of Rachel, Kansas. Right from the opening scene, Knotts’ character is shown to have an excitable imagination when he believes there has been a murder right in front of “the old Simmon’s house.” He’s quick with his camera and loose with the facts as he reports in to the local police station only to have the supposed victim walk in rubbing the large knot on his head. Like Barney, Heggs has been made out a fool due to his own aggressive imagination and desire to be a somebody in the eyes of those around him.

Turns out it’s been twenty years since a famous double murder took place at the Simmons mansion which doubled as the home of the Munsters on the Universal backlot.  At the prodding of caretaker Liam Redmond, type setter for the paper, Heggs sneaks in an article that captures the imagination of the town readers. Sargent assumes it was written by his ace reporter, Skip Homeier, but when he finds out it was the cowardly Heggs he comes up with a great follow up story. Heggs is to spend the night in the supposedly haunted Simmons mansion on the night of the double murder’s twentieth anniversary.

Never quite sure if he has the nerve to go through with it, Heggs temper will get the better of him when Homeier’s prodding sends him to the inevitable challenge. Injecting romance into the plot is the fact that Joan Staley is the girl of Hegg’s dreams. It’s assumed she belongs to Homeier but she just might have a soft spot for the thin man who tries desperately to impress her. As the clock nears midnight, Heggs is off to meet his fate. At this point I’d like to point out that nobody plays scared better than Don Knotts.

Chains rattling, secret staircases, bloodstains on the ivory keys of a cobweb covered organ that plays at the stroke of midnight and a set of shears plunged into a hallway painting that displays  a beautiful woman bleeding profusely from the neck are enough to send Heggs into a state of panic. Once Sargent gets the Luther Heggs story to print, he’s made a folk hero of the pint sized reporter. From here on in you’ll have to see the film though I suspect a good many of you already have and know how the mystery will unfold. There are plenty of fun scenes yet to come including the cantankerous character actor Charles Lane as a lawyer getting poor Fife/Heggs/Knotts on the stand trying to defend himself and his far fetched story.

So what makes Fife and Heggs the same? 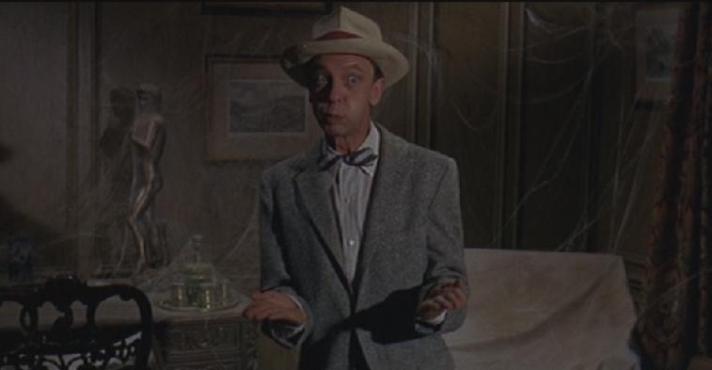 Both display a knack for karate, claiming there body is deadly weapon.

Bulging eyes and that lower lip when they get their courage up.

Shaky around woman and ghosts. That is until either girlfriend Thelma Lou in Mayberry became his steady or in this case Joan Staley gives her heart over to the man in the tweed. Notice the way he floats it right out there?

The tweed, the bowtie and that hat seem to be carried over from Fife to Heggs.

Barney Fife commonly referenced his Mother during the course of the Andy Griffith show, “My Mother was the same way.” Luther Heggs is prone to doing the same.

Adding to the flavor of joining the two characters is the fact that The Ghost and Mr. Chicken almost plays like an elongated episode of the TV show minus the key players. Knotts is surrounded with numerous actors that played recurring roles and many who guested at one point or another. Hal Smith who was famously known as Otis Campbell, the town drunk is in here playing just that. A town drunk and the film’s opening supposed murder victim after his wife clubs him with a two by four. Mayberry’s nosy Clara Edwards played by Hope Summers joins in the fun as well at the start screaming and claiming she saw the murder that sends Heggs scurrying for his camera and press pass.  Then there is long time character player Burt Mustin who continually pops up in scene after scene, just as he did in many of the early episodes of the old Andy Show as Jud.

Players like Ellen Corby turn up in the movie. She to appeared opposite Knotts in a memorable episode of the TV classic, Barney’s First Car. There are many other “faces” throughout the film that I recognized who journeyed at one time or another to Mayberry including Hegg’s lawyer and the man in the diner listening in to Heggs as he attempts to court Miss Staley.

Even the director of Ghost had worked with Don and Andy, Alan Rafkin. He’d go on to direct Don in another fondly recalled outing, The Shakiest Gun In The West.

All of these facts and the realization that when we’re young and discover these films and shows as kids, the actor doesn’t necessarily have a name. He’s just that guy. He’s Barney Fife.

In closing, a special thank you to Don Knotts for the gift of laughter to my childhood and beyond.

Now don’t forget to check out the important discoveries others have made for themselves by doing yourself a favor and click the recaps for Day 1 …….Day 2 …… Day 3 … Day 4

21 thoughts on “Barney Fife and Luther Heggs : One and the Same With a Special Thank You to Don Knotts”