This monthly challenge from Speakeasy’s Kristina turned out to be a gem of a title that somehow I overlooked up too this point. Perhaps initially through my early years of film discovery it was because this Samuel Fuller directed feature lacked “star power.” Big mistake as character player Gene Evans delivers a performance worthy of note and along with The Steel Helmet perhaps his best. It should come as no surprise that Fuller directed that other feature too.

This is the story of the early days of newspaper men in New York City circa 1880. It’s the saga of men with ink running through their veins and the ethics involved in reporting newsworthy items to the public.

“The press is good or evil according to the character of those who direct it.”

Evans plays a man of great integrity in this black and white feature that has a very documentary style flavor to it that works thanks to Fuller’s gritty story and camera work. He’s ashamed to be working for Mary Welch’s Star News. Around the bar of the local watering hole, Evans along with a group of other veteran newshounds devise a plan to issue their own newspaper and promptly christen it The Globe.

The sounds of printing presses practically become a character of their own and the film is flush with a stirring sense of excitement, pride and accomplishment. It’s easy to get caught up in just what Evans is trying to set forth against the odds of the bigger paper run by Welch who caters to the cheap expose type stories that are not always based on fact but conjecture.

As editor Evan’s paper begins to gain in stature, Welch wants it put out of business and continually tries to either beat him to a front page story or use thuggish tactics leading to the destruction of his printing presses. She isn’t above other nefarious deeds in the fight for newspaper glory and profits.

Not only is this a gripping storyline but it’s also an inspiring one as we watch Evans fight for what he believes is right and ethical. Similarly to do so with the integrity befitting a newsman. All the while having to defend himself and his staff from the sometimes brutality of Welch’s antics.

Writer as well as director, Fuller inject some great dramatics in this screenplay and on top of that the film is exciting with what in essence becomes a turf war as the two papers struggle for supremacy. Evans will prove himself more than just a newsman when the chips are down and he comes to within inches of actually killing a man who has committed a heinous crime against a young newsboy. He doesn’t stop there when Fuller also includes a rather shocking scene for the era when he lays his angered hands upon Welch. 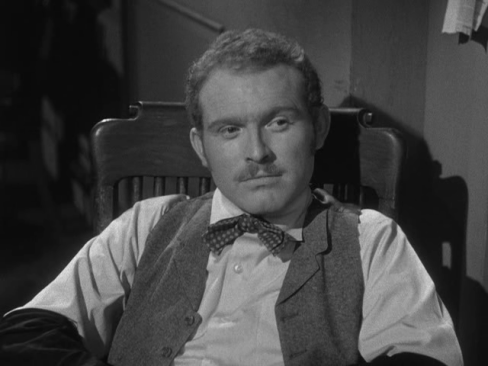 While Gene Evans may not have attained the status of a star player in film history, he is an easily identifiable actor through his many appearances in movies and TV. For more on Gene’s career please take a look at an article on the red headed actor over at Speakeasy that Kristina had posted a while back.

For this era of movies it is also not the norm that a woman is playing the outright villain of the piece. If it wasn’t for the final few minutes of the film that almost seemed forced for commerciality, Miss Welch’s editor who prizes readership and money over any stories printed in her newspaper could almost rank up there with Louise Fletcher’s iconic bitch, Nurse Ratched in One Flew Over the Cukoo’s Nest.

In the end this proved to be a great recommendation to come my way and another gritty Samuel Fuller production that I would fully endorse and recommend to anyone taking the time to stop in and see what Kristina challenged me to watch this month.

On that note, now it’s time to move over to Speakeasy (where Kristina watches movies) and see just what I assigned her to check out this month. It’s a Treasure Island type tale from Fritz Lang starring an actor who was meant for on-screen adventures with sword and cutlass combined with fair maidens in distress.