Swinging London of the late sixties plays host to another spoof of the spy genre with a couple of real live Rat Pack members to add that dash of salt and……..

The title in itself is meant to be a joke with Sammy Davis Jr. playing Salt and Peter Lawford his pal Pepper. The two own and operate the Salt and Pepper club which conveniently allows Sammy to take to the stage for a couple numbers. 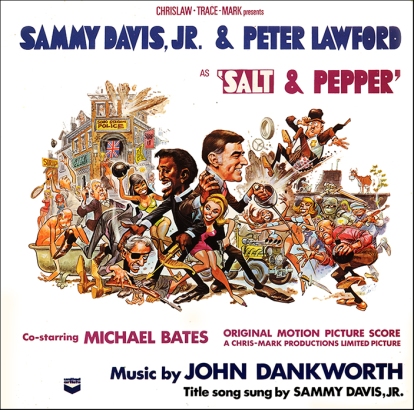 When a lady spy on the run enters their nightclub in hopes of shaking off two hitman is found dead along with one of her attackers our hipsters are about to wind up in the middle of a far fetched revolutionary plot to take over England. Sammy and Peter are never quite sure who to trust but both sides of the covert spy organizations believe that the lady found dead in their care may have passed on some vital information to them before expiring.

This in turn makes the pair a wanted duo. The forces of good are trying to get them to recall her exact words while John Le Mesurier’s evil doer in eyepatch wants them dead before Queen and country find out just what they know.

Naturally our two aging swingers would like nothing better than to shrug the whole thing off and get back to chasing and flirting with women half their age. When Sammy decides to get out of England Peter gets a guilty conscience, “Once in a while I get awfully British.”

Looks like the boys are going to have to see this caper through.

The majority of the jokes here come from the pair’s constant harassment from local police inspector Michael Bates. He’s sure the pair are up to something and has them followed and bugged. This allows Sammy to do some great impressions of both Bogie and Cagney over the hidden microphones leading Bates in all the wrong directions. Minor as these scenes are in the whole of the film, to see Sammy do the impressions proved to be the highlight of this rather forgettable film for me.

The best laugh comes when Peter’s manhood is questioned by Sammy when visiting the school which Peter attended as a youngster. It has to do with the word “fag” and it’s various uses.

Michael Bates does his best version of playing an English Clouseau but all I can say is nice try. The producers even cast Graham Stark as his assistant who played the same basic role opposite Peter Sellers in A Shot in the Dark. “Fact Hercule!”

Sammy on stage here reminded me of the later Elvis films where the King was subjected to some less then stellar tunes for recording. Sorry Sammy but I still think your an amazing on stage talent. My apologies as well to Elvis.

Salt and Pepper was directed by Richard Donner who has had a very long streak of hits at the box office including The Omen and Superman from 1978 and on to the Lethal Weapon series.

Both Sammy and Peter scored executive producer billings here and would re-unite for a follow up titled One More Time the following year under the direction of pal Jerry Lewis.

Another so-so attempt at a spy spoof when everyone was trying to get in on the action.

Pretty much for fans of the genre or the two Rat Packers.