In Part 1 of Lobby Card Collecting I pointed out how it’s a great way to collect some film memorabilia without unloading thousands or even millions in the case of The Maltese Falcon statuette at auction recently. The funny thing about that is for years I have told my two sons that if they ever buy me some movie memorabilia it’s the Falcon that I have always wanted. I guess it will just have to remain something that “dreams are made of.”

So with the lobby cards you can focus on films or favorite actors. For me when I started collecting it was mainly Bronson so here is a complete set in my collection of Charlie’s iconic film. It’s Death Wish and while I purchased these in my teens many years back it’s hard to believe that these are 41 years old as of this post.

If they are worth any money that’s a bonus because to me they are a piece of cinema that I can call my own.

Lobby cards came in sets of 8 and would be displayed in the window case at the front of theaters up into the 80’s before they disappeared and posters lost their flavor in general I would like to add.

#2. Cop Jack Kehoe passes by a billboard as Bronson’s character is causing a news uproar.

#3 Not for the squeamish is the brutal rape and murder scene. Note Jeff Goldblum at far right holding on to Hope Lange.

#4 Love this scene with the calm Bronson facing off against a subway attacker. 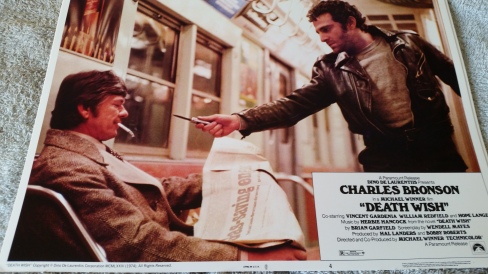 #5 Taking aim with a newly opened gift from Margolin.

#6. Vincent Gardenia tracking a vigilante and narrowing the field of suspects.

#8 love this shot of Bronson prowling the night life.