With Kristina over at Speakeasy featuring two versions of H. Rider Haggard’s famed story (1935 and 1965) I thought it was time to look back at the sequel to the 1965 Hammer Films release that featured Ursula Andress as “She who must be obeyed.” This time out the leading character is played by Olinka Berova subbing in for Miss Andress.

Who you say? According to the films trailer it’s Olinka Berova. “A new star. A new face. A new woman!” 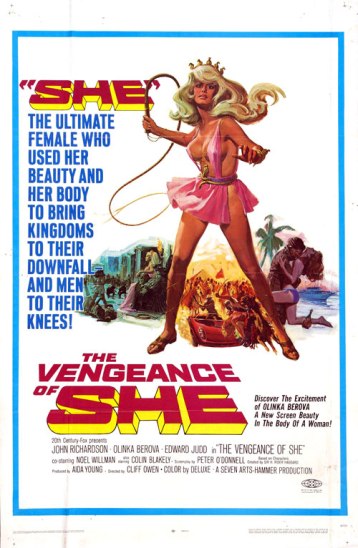 John Richardson returns from the 1965 film and has mesmerist Derek Godfrey using his powers of persuasion to lure lovely Olinka to the hidden city and join Richardson in the blue flame that guarantees immortality. On her journey she sidesteps everything from sexually aggressive truck drivers to the slave trade. All the while Edward Judd is trying to get to the bottom of her nightmares with little success and gives in to seeing her through on her trek to the unknown.

Starting out in a rather dreamy opening we find Olinka making her way along highways till finally stowing away on a boat commanded by Colin Blakely and featuring Judd as a guest who takes a certain interest in our fair haired damsel in distress.

Hammer regular Andre Morell shows up as a magician of sorts who battles the forces of Godfrey to save our lovely lass but comes up short. “She” is once again heading to her fate at Richardson’s side. Morell made a really fine Watson in the studios Hound of the Baskervilles opposite Peter Cushing’s Sherlock Holmes back in 1959. 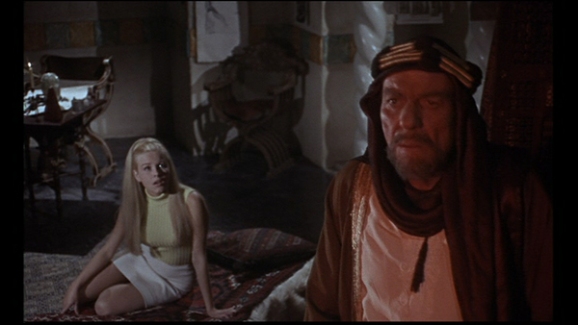 After escaping death in the desert our two leading actors finally enter the underground city where Olinka is immediately worshipped by those around her and poor Mr. Judd is imprisoned though he is treated to an exotic dance and more if he cares to partake. By this point in the film his heart has been captured by the stunning full figured curves of Miss Berova whose real name happens to be Olga Schoberova.

There is more going on in this popcorn plot than just the Olinka story. Richardson yearns for his love of the first film and Olinka is a pretty good substitute for Ursula in the measurements department. Our evil character is brought forth by the occultist Godfrey who controls the mind of Olinka and wants nothing more than to enter the life giving blue flame himself so that he may become ruler.

With a little help along the way Judd just might be able to find his way through the cavernous city to the secret chamber where the magical star will cast it’s rays down to Earth and ignite the flames of life. It’s here that the struggle for dominance and power will take place between the leads in this so so sequel to the earlier film. This time directed by Cliff Owen in his only film assignment from the famed British studio.

John Richardson who returns here as Killikrates sandwiched the famous One Million Years B.C. from Hammer and Ray Harryhausen in between his two She films. Talk about a trio of gorgeous leading ladies in quick succession. Two of which I think it is safe to say are universally considered two of the most gorgeous women of the era. I’m speaking of Raquel and Ursula. Sorry Olinka. Richardson’s role almost serves as a role reversal from Ursula’s in the first film. It is he awaiting the reincarnation of his lost love as opposed to her in the first film

No classic here but it fits in with a sub genre of titles that Hammer were putting out during the era. The Viking Queen, Prehistoric Women and The Lost Continent.