How does this big budget Joshua Logan musical rate on the oddest casting in movie history? I’ll leave that decision up to you but will say it might seem a tad bizarre to star Lee Marvin and Clint Eastwood in a musical but considering the plot and gold rush backdrop of frontier times, it’s not as far fetched as one might think. Consider this, it’s no John Wayne as Genghis Kahn.

While I won’t swear to it, I think I saw this film as a youngster on TV but it was so long ago this viewing was like seeing an all new Marvin/Eastwood film again. Wish I could do that with Point Blank and Dirty Harry all over again. I’ve been meaning to sit in on this one for a number of years but the length has always turned me away at close to three hours. So here I am in holidays this week and not going anywhere so I dived right in and over two nights finally gave this an all new look from 2018 versus the forgotten memories of childhood.

I’ll start by saying I did enjoy the film despite it’s length but also wondered how the core subject of the film would fare in the world today. Lee Marvin was just four years removed for copping an Oscar in a comedic role so here he is again against type portraying an unkempt drunken mountain man panning for gold and living by his wits. Following the opening credits he’ll meet Clint Eastwood through tragic circumstances that will hilariously result in the finding of gold while burying Clint’s brother. A claim is staked as Lee takes on Clint for a partner and the California gold rush is on.

Lee will be quick to tell Clint there isn’t a commandment he hasn’t broken but he’s never crossed a partner.

A tent town quickly rises and the population increases as is noted on the sign as you enter the make shift town. Population : Male. Yes these miners that includes Ray Walston (looking like Malcolm McDowell) and Harve Presnell (who displays a great singing voice on the song They Call the Wind Maria) as a slick gambler will realize just how much they miss the touch of a woman when a Mormon with two wives passes through leaving the miners awestruck. And so begins the core subject I’m speaking of. Walston leads the charge and the miners will convince the man with two wives to sell one off. He’s never really gotten along with his second wife, Jean Seberg, so agrees to led the bidding begin. Cue a drunken Lee Marvin who has no idea what’s really going on but clearly states he’ll double the bid before passing out in the middle of a muddy street.

Comedy will ensue as Clint and the boys set out to clean Lee up down by the river with a bath and shave set to song before he stakes his claim of ownership on Seberg. 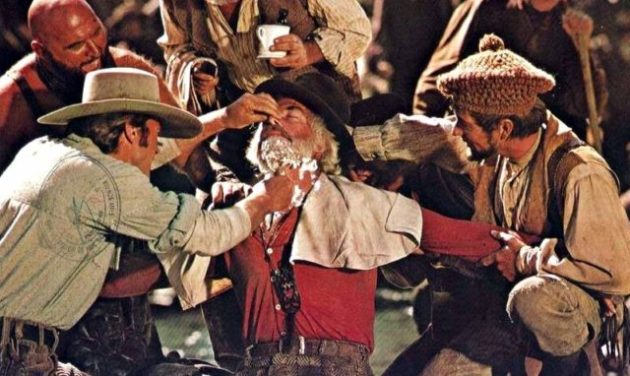 It’s a harsh union to start with but Lee is going to see that Miss Seberg is a strong minded woman. Lee for his part will become a might jealous at the slightest admiring look cast her way from a fellow miner. So much so that a plan is devised by Clint and Lee to basically kidnap 6 French prostitutes headed past their make shift town to keep the men happy. This in turn leads the men to build a real town made of lumber to keep the women happy in a real live cathouse.

And so it goes on for another ninety plus minutes of gold mining, debauchery and song. Lee of course scored a rather shocking number one hit with the recording of Wondering Star and Clint does his own singing as he would on occasion throughout his career. Perhaps most notably as the depression era country music singer, Red Stovall, looking to play the Grand Ole’ Opry in Honkytonk Man. A keen eye should spot Roy Jenson seated next to Clint during a poker game. Jenson would become one of the Clint Eastwood stock company members in the years ahead appearing with Clint in Thunderbolt and Lightfoot, The Gauntlet, Every Which Way But Loose, Any Which Way You Can and Honkytonk Man.

I’d say that what I’ve read about this project over the years has to a certain degree blurred my opinion/recollection of it. I’m fully aware it was a budget blown out of control and not exactly a box office hit. This was the era of the overblown musical at a time when people’s tastes were changing. Still, I came away from this fully entertained and that’s mainly because of the Lee Marvin factor. For those of us who have read up on Lee we’re fully aware he liked his drink. Keeping in character, Lee apparently did his fare share of drinking on the production. Just as the part called for. 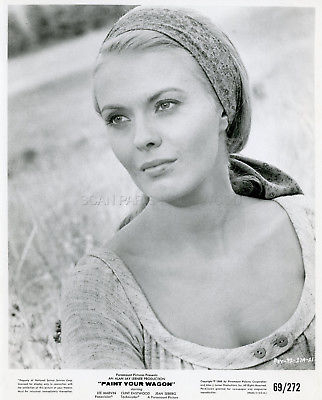 Miss Seberg is beautiful here and I love the strength her frontier woman possessed. Sadly off screen she’d be dead at the age of just 40 in 1976. Another of Hollywood’s misguided souls taken too early.

My favorite dialogue exchange is of course one with Lee Marvin. When cornered at the dinner table with a God fearing woman he had this to say…..

Woman: “You should read the bible.”

Woman: “Didn’t that discourage you about drinking?”

Lee : “No but it sure killed my appetite for reading.”

If you’re a like me and have been eyeing this one up but somewhat turned off by it’s three hour length, make the time for a fun Lee Marvin role equalled by Jean Seberg and of course a screen icon in the making named Eastwood.

Turning the Mormon way of life on it’s ear I’ll leave you with this quote from Jean Seberg to ponder, “Why can’t a woman have two husbands?” 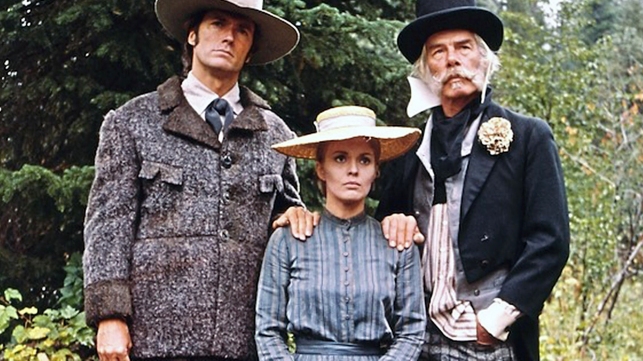