While growing up I fell in love with the two eras of classic horror films on late night television. The first wave with Karloff and company and then the Hammer years mixed with the Price-Poe cycle. With my interest peaking, I would hit the libraries researching the titles available to me from both the studios and the filmographies of the famed actors donning the greasepaint and performing the mad doctor experiments. Pen in hand I would write the titles under the appropriate columns.

One such title is a film called Battle of the River Plate also known as Pursuit of the Graf Spree from 1956 starring Peter Finch and in the cast somewhere in a bit role of sorts, Christopher Lee. This put the film on my radar of titles to watch out for.

In the early days of the VHS rental, cities and towns had rental stores and chains popping up just as fast as Tim Horton Coffee and Donut shops do in Canada. One such chain was Bandido Video of which there was a local store next to the bank our family dealt at. This always presented me with a good shot of renting some titles for the weekend when my parents would take their weekly paychecks in to the bank.

Sure enough among the section of classics was a VHS copy of the Lee film River Plate. I quickly added it to the pile of our weekend entertainment that I am sure consisted of movies including Meryl Streep in Plenty for Mom and The Big Red One for Dad. 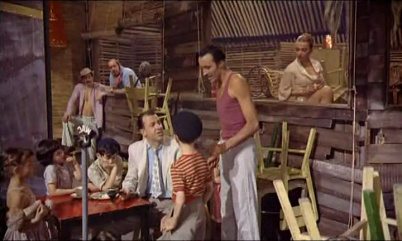 Apart from remembering that Lee appeared as a waiter of some sort in an outdoor cafe, I can’t recall much if anything else about this British naval film. As time has moved on and the video chains died a slow death older VHS tapes have seemed to disappear like the 8 track tape. But at least I can say I have seen this Lee film and put a check mark beside it.

I believe this film has turned up on TCM but due to restrictions of rights holders has been blacked out in Canada. So I have yet to revisit it. That is all about to change.

Just last week while rummaging through a box of discarded video tapes at the local good will store I came across a copy on VHS. Hooray for me! That puts the total to 120 Lee films in my collection. The irony of all this is that when I opened the hard shell case of the tape it had the Bandido Video sticker on the inside with the old address.

Yes, it’s the exact same tape that I rented about 30 years ago! It has finally found a home with someone who appreciates it. This is why I always say I never pass up a dusty box of VHS titles…….see here.

13 thoughts on “The Serendipity of Movie Collecting”