This story of the SS St.Louis leaving Germany in May of 1939 with over 900 passengers of Jewish decent gives director Stuart Rosenberg the opportunity to work with close to twenty well known film stars scattered throughout this movie based on historical fact.

While the plot is a straight forward account that one could look up in the history books if preferred, it does offer some fine work by some of those involved. The movie opens with all our passengers boarding the luxury liner. Much in the fashion that an Airport movie would minus George Kennedy.

There is intrigue aboard ship where Nazi party member Helmut Griem does his best to make the passengers feel uneasy against the wishes of the compassionate Von Sydow. Serving as the Captain’s aide is Malcolm McDowell whom Griem pressures at various times.

While the ship is en-route there is plenty of political games going on in Havana. There are those that don’t want the passengers allowed to set foot in Cuba. The likes of James Mason, Orson Welles, Ben Gazzara and Jose Ferrer use the ship’s inhabitants as pawns in a game of extortion and politics.

When the ship is denied entry to the port in Havana panic begins to set in amongst the people on board. Fear takes over when they realize they may have to return to Germany where certain death awaits them.

No doubt one could look at this as an Airport type of film or Grand Hotel on the seas if preferred. The difference is it is based in fact and one of our darkest times in recent recorded history.

Actors of note fill out the cast in smaller roles with not much to do. Case in point would be Denholm Elliott in a rather needless role. Fernando Rey and Maria Schell join him in that regard as well. 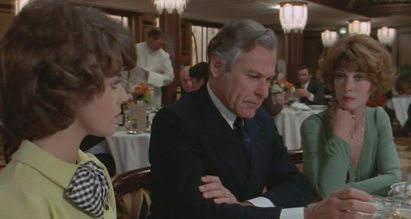 Some performances do stand out here. Lee Grant was nominated for an Academy Award as Sam Wanamaker’s wife. I am quite sure her scene with Fay Dunaway sealed the nomination. Both Paul Koslo and Jonathan Pryce are excellent as two friends who have already suffered at the hands of the Nazi regime.

Max Von Sydow is his usual excellent self and is equaled by Oskar Werner playing Faye’s husband in what would be his final film role. Katharine Ross in a fairly brief role also does a nice bit here as the prostitute daughter of Nehemiah Persoff who tries desperately to save her parents from the terrors that await them.

Of all the name players here, it’s little known Victor Spinetti that impressed me the most as a father waiting in Cuba for the arrival of his two small daughters. His trials to get them off the ship are heartwarming. If only he can get James Mason’s foreign minister on his side. 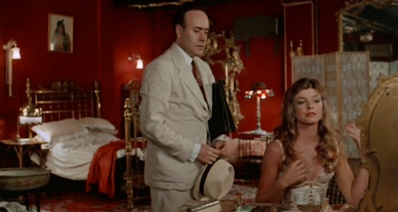 While no classic here from Cool Hand Luke director Rosenberg, it does offer a piece of WW2 history that some countries might prefer to forget with a cast that allows the film fan in me to star gaze.