Growing up as I did in the long shadow of Jaws there wasn’t a kid on the street who didn’t know who Captain Quint was. We all knew his rough exterior and the story of the Indianapolis or we giggled at his toast to swimming with bowel legged women. The main difference between me and many of my friends was I wanted to know more about the actor Robert Shaw who played Quint and watch his other film roles. Sadly due to his early death there isn’t really that many but this John Frankenheimer title must have served as the guide for making an excellent thriller in the terrorist genre for those that have come since.

The opening raid on a terrorist hideout led by Shaw’s elite tactical group sets the tone for the the films easy to take two and a half hour length. Shaw’s character is known as “the final solution.” When he is called upon there are no prisoners to be taken. Self doubt begins to creep into his character as we shall see when he makes the mistake of leaving a woman alive during the raid. Little does he know that Marthe Keller is about to make his life hell.

Keller has convinced her American lover to join her in a suicide bombing of enormous proportions. Good Year Blimp size proportions! Bruce Dern stars as her deranged partner. He’s a returning war hero who can’t fit in. Please remember that this was filmed at a time when this type of character wasn’t the cliche it arguably became in the years that followed. You could argue however that Dern became the poster boy for the tortured Vietnam vet on film. Especially with Coming Home right behind this release. 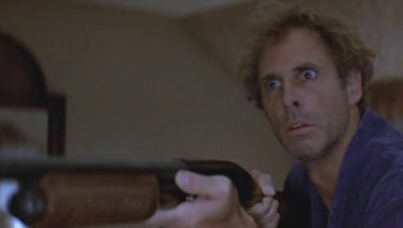 Shaw and partner Steven Keats arrive in the United States on the trail of Keller with a tape recording that convinces U.S. intelligence that Shaw is onto something. What they don’t realize is the methods he’ll use to get information from the likes of Michael V. Gazzo. Actor Shaw makes for a determined officer of the law.

“What exactly is this superbowl?”

The terrorist plot begins to take shape after Shaw takes down one of Keller’s contacts, Bekim Fehmiu. He just can’t quite figure out how they intend to create chaos at the game.

This is where Dern comes in, he’ll be piloting the Blimp from above.

This really is a riveting film with a great score by John Williams to tighten up the tension. Having Shaw and crew running along the sidelines of a real game between the Cowboys and the Steelers makes it all that more realistic.

Our three leads are all rock solid in their performances and it should be noted that Dern never turns this into a cartoon character. The script fleshes out all three leads and the reasons for their actions.

Dern was by this time a well known face and is still active having just scored an Oscar nomination last year in Nebraska. Keller was just coming off another thriller in The Marathon Man and continues to act overseas.

Sadly Robert Shaw only had three films remaining before his death and none match this gripping effort. Robert died in August of 1978 at the age of 51 leaving his final film Avalanche Express unfinished. By the time it was released it turned out as an embarrassment to all involved.

Like many films from John Frankenheimer, this one is well worth checking out. If like me you hadn’t seen it for many years it’s about time to revisit it. I’m glad I did.