Growing up in the shadow of Jaws naturally creates an interest in the sea and anything to do with sharks. That includes hoping to some day see a film starring he man Victor Mature in this awesomely titled film with an even better film poster.

Alas, that’s really all there is to recommend this filmed in Cuba tale of big Vic taking command of a group of navy scientists trying to perfect a shark repellant that will protect down fighter pilots from the perils of the deep. Mature is the perfect officer for the job. He’s already lost one ship with the majority of his crew dying in shark infested waters while awaiting rescue. He’s driven and has a hatred for the big fish. 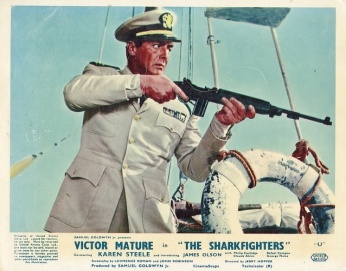 When asked, “What do you know about sharks commander?” He replies, “They’ve got lousy table manners.”

Kind of sounds like Robert Shaw’s Quint to me.

Much to the dismay of Vic’s wife Karen Steele the big guy plans on using himself as a test pilot in the middle of a pack of hungry tigers. Just like in the film poster, he’s got a knife firmly in hand. On topside keeping an eye on the proceedings is James Olson making his film debut and the always dependable Claude Akins taking a break from playing a heavy to portraying a navy cameraman this time out.

There’s nothing actually wrong with this film from director Jerry Hopper other than it’s not all that exciting considering the marketing campaign. At 74 minutes in length there isn’t much going on except tests and the bickering between Vic and his second in command about whether or not they have actually made a discovery to help the war effort and save lives.

I never spoil the end of films here but you just have to scratch your head on this title and wonder if the producers forget a few pages of script or perhaps ran out of budget dollars.

If you’re like me and look to see all things Victor Mature then you will want to check this out, otherwise you may find Shark Week much more to your liking on Discovery.