It’s all a bunch of hocus pocus that I have a feeling would make for an entertaining viewing with a crowd of enthusiastic fans of bad cinema.

Andrea King and Jerome Thor arrive in the far forests dominated by Lon Chaney’s coven of worshipers that mainly involve scantily clad females dancing up a not so sexy storm that appears to be mainly for Lon’s pleasure.

Our out of place couple take up with Lon’s brother John Carradine. Carradine is the good warlock, Lon the bad. They are in a continual struggle for power to control the coven and at the same time world domination. No fooling!

The biggest “shock” of the film occurs when Lon removes his hooded robe to reveal two horns coming from his forehead. He’s definitely working with the forces of evil.

Let’s not forget that Carradine tells the story of the family curse and that Lycanthropy runs in the genes as well. Before the films 74 minute running time is up, we’re treated to a rather embarrassing example of just that. Thankfully it doesn’t involve Lon. I’d hate to see him tarnish the legend of Lawrence Talbot. Having said that, let’s just pretend Face of The Screaming Werewolf doesn’t exist.

Any film where I can see Carradine in his Shakespearean tone emote lines like …….

Distant place where I would be, Make a proper place for me. Time and space will I command, given by the devil’s hand.

with his eyes blazing is a clip I take pleasure in.

When Lon kidnaps one of Carradines clan it’s time for John to draw upon forces far greater than Lon can handle and…….I’m not spoiling anything here.

This film is part of VCI’s Jerry Warren collection and according to the back cover was released in 1965. The opening credits claim it was a 1966 release while the closing credits state 1964 if I remember my Roman numerals. 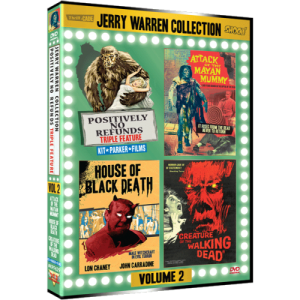 Of note way down the list of crew members doing 2nd unit work is Reginald Le Borg. Back during Lon’s prolific years, Reggie directed some of Lon’s Inner Sanctum series as well as The Mummy’s Ghost and The Black Sleep. The latter two had both Lon and John as well.

Enjoy this one for all the bad moments and forgive John and Lon. Remember they were just a couple of working actors.