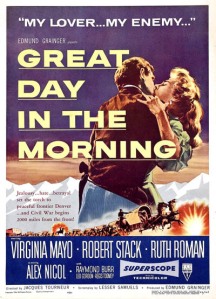 One of my earliest screen crushes, Virginia Mayo gets top billing in this pre-civil war yarn but the film really belongs to Robert Stack playing a Southern gent in the year 1861 looking out for number one as the inevitable war between the North and the South closes in on him. Always on the move to make a dollar, Stack takes over the local gambling hall in Denver Colorado winning it in a shady card game against current owner Raymond Burr with Ruth Roman the saloon hall dealer/entertainer dealing off the bottom. The towns people are slowly dividing into camps of North vs. South as the war edges closer and who better than Leo Gordon to oppose Robert Stack and the South. Stack of course has 2 leading ladies to contend with in both Mayo and Roman and the outcome of this triangle may surprise you. Between romancing the leading ladies and contending with our villains Burr and Gordon, Stack does a creditable job in this technicolor feature from director Jacques Tourneur by way of RKO. Film fans will know our director from various genre’s including the Noir classic Out of the Past among others.

Throw in the dramatics of gold shipment headed south for the war effort, northern spies trying to thwart the shipment and it all adds up to a decent effort with Stack standing tall, Burr at his most brutish, Roman looking great in a saloon dress and Mayo glowing in close ups. Stack of course was just 3 years away from television immortality as Elliot Ness and countles other roles including an appearance in the always popular Airplane. Leo Gordon as one of our main antagonists in this film has to be one of the most widely known faces from 1950’s cinema both in film and television, appearing mainly as a scoundrel in everything from Gunsmoke and Maverick episodes(Mel Gibson’s Maverick as well) to writing and working with Roger Corman. As for the lovely Virginia Mayo, I find it a little bit comical when I say she was one of my first screen crushes when she would have been old enough to be my Grandmother by this time. She would be appearing in countless movies I would see on a Sunday afternoon ranging from the Danny Kaye comedies to damsels in distress opposite Burt Lancaster. How could I not become smitten?