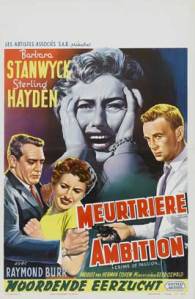 A match made in Noir heaven. Barbara Stanwyck and Sterling Hayden! Now if we only had a script worthy of this monumental pairing. I don’t mean to sound disappointed but considering what these two stars had appeared in proir to this film the moviegoers of 1957 must have been excited by the marquee over the theater entrance. Alas, it’s a second rate melodramatic script produced by Herman Cohen. The same Cohen who in 1957 also produced 3 drive-in favorites including the Michael Landon camp classic I Was a Teenage Werewolf.

The film starts out fine with Stanwyck as a newspaper writer who knows the whereabouts of a wanted criminal. Enter inspector Royal Dano and assistant Sterling Hayden. The sparks fly and the innuendos are prevalent as the two leads get to know each other. It’s a fast moving romance and before you know it Barbara gives  up the news industry to become a contented police officers stay at home wife. Anyone who has ever seen Stanwyck in action should know she has never been a contented wife for very long. Boredom sets in and if Hayden isn’t about to improve his social standing and position at the precinct then perhaps she can find a way by “talking” it over with Mr. Raymond Burr as cheif of detectives. One thing leads to another and we have a murder on our hands. From there it’s a matter of Hayden proving himself and catching a killer.

Directed by Gerd Oswald the film plods along but those of us who are fans of the leads won’t mind too much. Stanwyck may  be a little over the top but you’ll forgive her and Hayden is low key as usual but that’s just the way we like him. Raymond Burr isn’t quite the villain he would usually appear to be at this time of his career and does just fine. Rounding out the cast is the wonderful character actor Royal Dano, Stuart Whitman in an early role, Robert Quarry of Count Yorga fame and King Kong’s favorite girl Fay Wray as Burr’s wife.