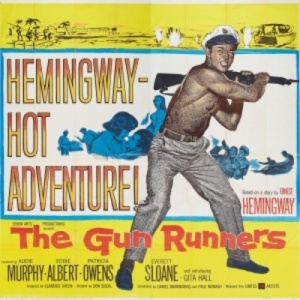 THAT HEMINGWAY KIND OF EXCITEMENT!

That’s what the trailer promises and behind director Don Siegel  it does a pretty good job of delivering in this B film from United Artists. In a re-working of Howard Hawks’ To Have and Have Not from the same Hemingway source story we find struggling charter boat captain Audie Murphy coerced into making a couple of shady trips over to the Cuban coastline. Audie was 10 years into his film career at this point and had settled comfortably into the B film category. Mostly known for his work in westerns this role fit him rather nicely. Siegel who went on to an illustrious career making Dirty Harry and other Eastwood flicks made some solid films before that teaming started a decade from this point with Coogan’s Bluff. He had already done the classic Invasion of the Body Snatchers as well as solid gangland flicks The Lineup and Riot in Cell Block 11 among others.

Best of all is the cast of top flight character actors that turn up in this 83 minute actioner. Eddie Albert is as charming as they come in the role of the villain and should be remembered as a top flight performer long before his turn as a big city boy turned farmer in Green Acres which he is probably best known for. Everett Sloane another seasoned veteran offers Murphy find support as does his leading lady Patricia Owens. And how about this trio, Richard Jaeckel, John Qaulen and Jack Elam turning up as well to lend a hand. Other than a disjointed opening scene it’s hard not to find this to be a nice way of passing the time.