Thanks to the fine folks at The Dark Pages, a newsletter that specializes in the world of Noir, my piece on Robert Ryan and Ida Lupino’s two duets was previously featured. Excuse any grammar issues if there are any, this was my original handiwork prior to editing. Here’s a look at what I had to say about this dream teaming of Noir cinema……

It should come as no surprise to fans of Noir that the inevitable teaming of Robert Ryan and Ida Lupino would be in the cards for two of the genre’s most familiar faces. Not only did the pair team up for a riveting effort from Nicholas Ray titled, On Dangerous Ground released in 1951 but they would reunite for a 1952 thriller that borders on what today might be twisted into an outright horror film. 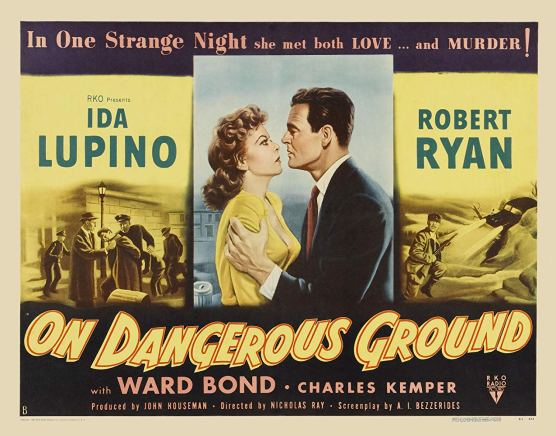 Both Lupino and Ryan already had a number of solid Noir outings under their belt by the time they teamed up for On Dangerous Ground. Ida had appeared in titles like Road House and Woman in Hiding while Robert had scored in Crossfire and The Set-Up among others. Signing on for the snowbound thriller, On Dangerous Ground was director Nicholas Ray. Ray had already worked with Ryan on Born to Be Bad and Flying Leathernecks and already had In a Lonely Place and They Live By Night on his Noir resume.

Featuring a harrowing score from Bernard Herrmann and produced by John Houseman, Ground features a violent minded Ryan who will encounter a tenderness in Lupino that might save him from wallowing in self pity. He’s a tough cop of the streets. He lives among those he polices on a nightly basis rarely seeing the good in people. It’s catching up with him. At the same time the force is on the hunt for a cop killer and Ryan is under pressure from Captain Ed Begley to get some leads. The inner torment within Ryan boils over and his fist first tactics are not what Begley wants. Ryan brutalizes those who stand in his way. Male or female.

“Why do you make me do it?” he rages as he beats a suspect senseless.

Realizing Ryan is about to explode, Begley admonishes him, “You’re a gangster with a badge.” and sends him out of town to assist in a manhunt “upstate”. Here Ryan’s position is to change from that of a violent cop to peacekeeper when Ward Bond becomes the violent avenger looking for vigilante justice in the death of his daughter. The Colorado locations add to the feel and authenticity of the film and contrast beautifully with that of the city’s dark alleys where Ryan has ruled with his fists.

It’s in a wild car chase over mountain roads in a blinding snow that sets Ryan and Bond approaching a farmhouse that the killer’s trail has led them to. It’s here that the gentle voice and touch of a nearly blind Ida Lupino will crack thru the tough exterior of the stone hearted Ryan. Lupino’s brother is the suspect that the men have come to claim. Bond to kill him and Ryan to arrest him. What lies ahead in the next half of the film is an emotional ride for all three of the leading players and we the viewers who by this time should be glued to the screen.

Ray’s use of a hand held camera in much of this film’s exhilarating chase scenes gives it a feel ahead of it’s time and allows the paying audience to experience the thrills first hand compared to most any other film of it’s day. Coming out of the Howard Hughes studio, Ground was apparently tinkered with and like many of his productions was shelved. In this case for two years before hitting movie screens. Ryan again proves he’s not a one note actor brooding about the screen as he swings his fists. There’s a depth to his characterization of Detective Jim Wilson and it’s rather astonishing that he never received more than one Oscar nomination from the Academy throughout his sterling career. Miss Ida’s character, Mary Malden, may prove to be the ideal companion to Ryan. Two lonely people looking for hope. Perhaps even more astonishing is the fact that Ida was totally overlooked by the Academe never so mush as securing one nomination in neither the acting or directing category.

Not wanting to play spoiler, I ask those of you who’ve seen this Noir favorite, is that fade out scene real or imagined? I think arguments can be made one way or the other.

In the year that followed, Ryan would have three films released to movie houses. The western Horizon’s West, playing opposite Barbara Stanwyck in Clash By Night and reteaming with Lupino in the stage bound thriller, Beware, My Lovely directed by Harry Horner and released again under RKO by way of The Filmakers Production Company. For her part, this would be Ida’s only acting effort released in 1952. She’d soon be hitting her stride as a director when a pair of films, The Bigamist followed by The Hitch-Hiker found their way into movie houses for 1953.

The plot is clearly set in motion when Ryan flees what we can only assume is a murder scene. He’s a handyman who it appears has killed his employer. He’ll soon hop a train headed to the next town circa 1918. Cut to Ida Lupino. She’s a widow who still mourns her late husband while running a boarding house. Ryan the handyman approaches the home having answered a want ad in a local paper. From the moment he walks into the home, we know there’s a brewing madman beneath the surface and so does Ida’s dog that he runs off.

There’s no doubting Ryan takes pride in his work and Ida is pleased. But something’s going on within our leading man’s mind. Is he an amnesiac? He consistently has blackouts whereby an alternate, violent personality surfaces that begins to alarm Ida. Ida’s eyes are a window to her soul. In both films she uses them magnificently as a tool when it comes to her acting style. Here at first they’ll convey a warmth that wants to nurture Ryan through his troubles. When she sees him for the madman he is, they’ll ignite the screen with the terror she’ll experience for the balance of this short 77 minute nail biter.

Ryan’s handyman will move freely between the mentally tormented and the physical tormentor towards Lupino. Just how far the violence is going to go comes to a head when he catches her in a lie and raises a set of scissors to the terrified homeowner.

While there are more actors than just Ryan and Lupino appearing on camera for director Horner, this is really a two character piece with both actors finely tuned to play off one another. This proved to be one of the director’s better films in a career that saw only a handful of features behind the camera. Horner’s better known as an Oscar winning Set Director. He won the statuette twice. In 1949 for The Heiress and in ’61 for The Hustler. He also served in the same capacity on John Garfield’s final film and classic Noir effort, He Ran All the Way.

In the years ahead Ida Lupino would move freely from the front of the camera to the rear directing countless television shows and a few features among them. It’s unfortunate that she never teamed again with Ryan in either capacity. Both still had some notable films ahead of them in the Noir field. Ida directing the edge of your seat thriller The Hitch-Hiker and appearing in both The Big Knife and While The City Sleeps. Among the titles still to come for Ryan were the Noir tinged western, The Naked Spur and Samuel Fuller’s House of Bamboo.

Thankfully both of these features are relatively easy to locate through television airings on channels like TCM or by way of the home video market to keep us enthralled by these fine performers from yesteryear. Robert Ryan left us far too early at 63 years of age in 1973 while Ida retired from the screen in 1978 and lived to the age of 77 passing away in 1995.