I can’t think of a better way to sit back and have a good laugh then to see the supreme cad, Terry-Thomas, itching to hold on to every last penny he has hidden away while a gang of bumbling crooks set out to steal his ill gotten gains, even resorting to kidnapping his not so near and dear wife to get it. 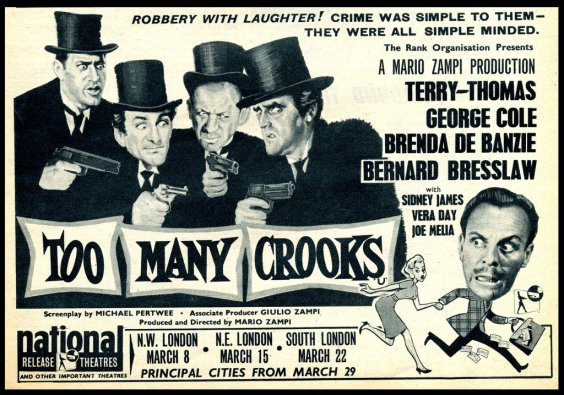 Following a fur heist gone comically wrong, our five pack of crooks, Sidney James, Bernard Bresslaw, George Cole, Joe Melia and blonde bombshell Vera Day next settle on stealing the riches of a local businessman who is rumored to be quite wealthy, Terry-Thomas. For his part, Terry is perfectly cast as the lecherous target. He’s shiftily earning money in illegal arms deals, hides his riches from the tax collector, chasing anything with a figure in skirts under the age of 30 and his ego isn’t above having both a painting and a bronze bust of himself in his office. Keep your eyes peeled and that same painting has a duplicate in the family living room at home.

When the gang first encounters Terry in front of his office safe he easily cons them into believing the police will arrive shortly. Far from it as he’s just in a hurry to embrace the pretty young thing on his arm. Now it’s time to introduce Terry’s wife, Brenda De Banzie, and his daughter, Rosalie Ashley. His daughter shocks him by letting him know she’s to marry a local tax inspector and he has Brenda believing they’re barely making ends meet!

Time for this comedy of errors to kick it up a notch into overdrive. Our favorite gang of criminals successfully pull off a kidnapping but it’s not the intended victim. They figured that Terry would spring plenty of cash for his daughter but what happens when they accidently snatch Brenda? Carry on with the plan but when Terry gets the ransom phone call and subsequent blindfolded meeting he has this to say when warned of what will happen to her if he doesn’t pay up….

“Cut her up old boy. This is the chance I’ve been waiting for for years.” followed by “This is the answer to a bachelor’s prayer.”

Dark? You bet but this is the Terry-Thomas I want to see.

Of course the gang begins to panic when Terry refuses payment. Even when they drop the amount down to a couple hundred pounds! He’s having none of it and begins to quicken his pace with the ladies. It’s at this point that Brenda begins to turn from the mousey little wife to a character of strength. Before Sid and the gang realize it she’s taking over and plots to teach her no good hubby a lesson he’ll soon not forget. She strikes a bargain that they’ll team up to steal every last dollar Terry has stashed away. She’ll take half and the gang can split the rest.

And so begins the comical tale of Brenda’s revenge. One that sees Terry thinking the gang really did cut up his wife with the police believing he’s the killer. Yes Terry and his gap toothed world of privilege is to very quickly come crashing down in hilarious fashion.

I sure am glad I purchased an all region blu ray player to allow me to order films from overseas that are not easily found here in North America. This proved to be a first time viewing for me and truthfully I can’t wait to watch it again. Since I watched it on my own I think I’ll make an effort to convince my sons to sit in on it so I can share the laughs on a second viewing. They do of course know Terry from his wonderful turn in It’s a Mad World. Too many crooks ….. sorry, to many scenes to pick out when relaying how much Terry had me laughing but just the sight gag alone of him standing next to Edie Martin as his Mommy is good for a guffaw. She must stand all of 4 foot nothing next to him.

The film was directed by Mario Zampi who had previously worked with Terry on the 1957 comedy Your Past is Showing that brought in Peter Sellers for the fun. Carry On fans will instantly connect Sid James and Bernard Bresslaw together since they would go to a number of flicks together in that long running series. Vera Day is a knockout here and keep your eye on Terry’s sly maneuvers when she’s within sight. Then there is character player John Le Mesurier as the court appointed judge trying to piece together Terry’s lies and untruths on the stand that most fans of England’s classics will easily recognize from his many film roles.

To wrap this up I wanted to spotlight Miss Brenda De Banzie here as the take charge wife who has had enough of her penny pinching rattlesnake of a husband. She commands the screen when the camera hits her much like she did in the must see 1954 classic Hobson’s Choice opposite John Mills and Charles Laughton. A definite favorite of mine.

Don’t miss this one if you haven’t seen it yet though you might need to get one of those overseas editions if like me you’re here in North America. Can’t wait to check out the other Terry-Thomas features in this set. 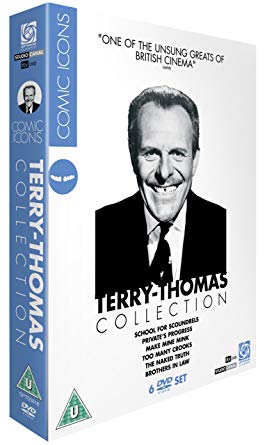