Under the circumstances of Burt Reynold’s passing, the time seems appropriate for joining me in a look back to the week that was when Burt was KING at the box office with the role that he would be identified with in the eyes of untold movie fans for the rest of his life. That of the Bandit.

So why not join me down at the Odeon for the 7:30 showing. If you can’t make it, why not catch the drive in double bill with Burt and Robert Shaw. 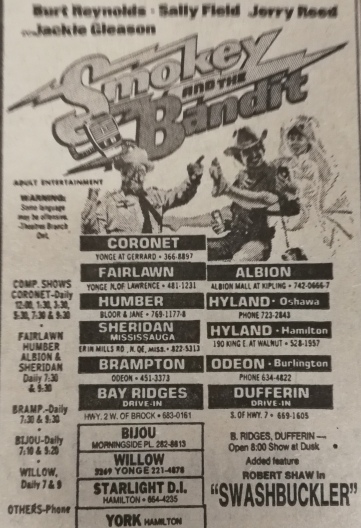 Speaking of Robert Shaw, how about The Deep with Miss Bisset? I hear that Clouseau film is the funniest one yet. “Does your doggie bite?” And isn’t that Norman movie the one with Redd Foxx? 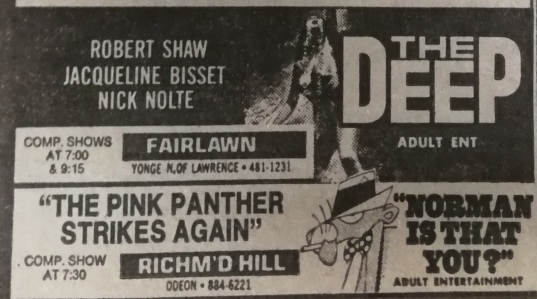 I had to look up what exactly Teenage Graffiti was all about but over at the IMDB, there’s nothing to tell. As for Telly and Elke in a Mario Bava thriller? That I’ll want to see on the big screen. Especially before they cut it up and rerelease it as The House of Exorcism.

I’ve still never seen this early film in the career of Susan Sarandon and not likely ever will unless someone out there tells me it’s a must see.

I saw this Marty Feldman satire years ago on City TV out of Toronto and someday I’m gonna see it again to see if it’s as funny as my memory recalls from those early teenage years.

Can’t be certain but I do believe I may have seen this one on the big screen at the time of it’s release thanks to the presence of Don Knotts. Always a favorite in our household.

With all due respect to the darling of the critics, I’m off to see the Richard Harris vs. a whale movie.

Say, what do you think the odds of this muscle bound guy named Arnold something or other from Austria are of his becoming a huge box office action star in the years ahead and eventually the Governor of California? Yeah, I doubt it too.

How’s this for a double bill? Horror fans rejoice. Hitchcock and Spielberg. For the record, I’d like to see that nearly 5 hour documentary from Marcel Ophuls but not in a theater in one sitting.

Ignore the space flick just this once will yah. Now who wants to join me for the Burt Lancaster thriller playing at the Newmarket?

Bo Svenson and Chuck Norris or how about Roger Moore and Burt Reynolds. Yeah, that’s what I thought you’d say. I’ll see you all at the 400 Drive-In.

Some doubling up here of ads but how about that second feature supporting Richard Pryor’s Greased Lightning. That’s where you’ll find me. 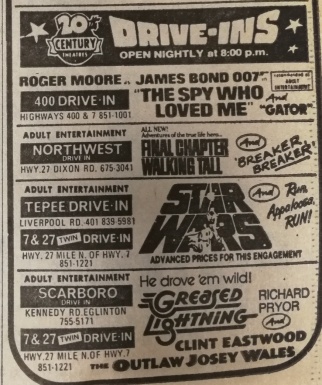 This is Canada so one shouldn’t be surprised to see Slap Shot playing. If it hadn’t been for the intrusion of home video, I suspect it would still be playing all these years later. This add is screaming out at me to climb into a time machine and travel back to the days when the likes of Hackman, Scott, Newman, Dunaway, Holden, Fonda and of course “The Burt” could be seen on the big screen. Care to join me? 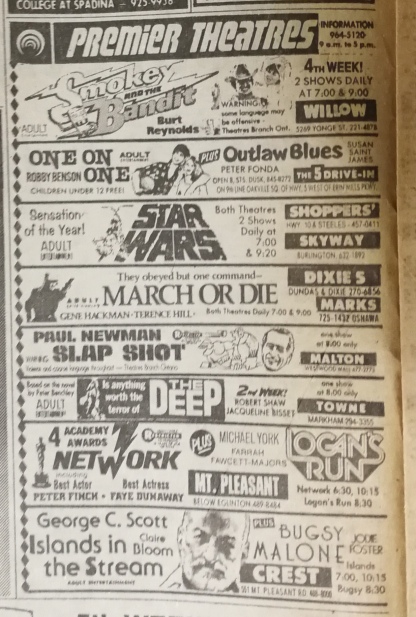 Here we are at the end of today’s movie going selections which can only mean one thing. The selections available for the raincoat crowd. Not only is Wild Schemers sensuous and stimulating but it’s been filmed in eroticolor! Destined to put technicolor out of business I’m sure.

That’s all for today so I’m off to spend some time on campus if you’re looking to find me.