Let me ask you this. Are you a fan of westerns, gangster films and low budget fodder from the 1970’s? If the answer is yes then surely I don’t have to tell you who the hard looking Neville Brand is. Brand played more villains and thugs then most actors got roles. On that note have you ever stopped and asked yourself, “Did Brand ever play a sympathetic, romantic role and get the girl when the curtain comes down?” 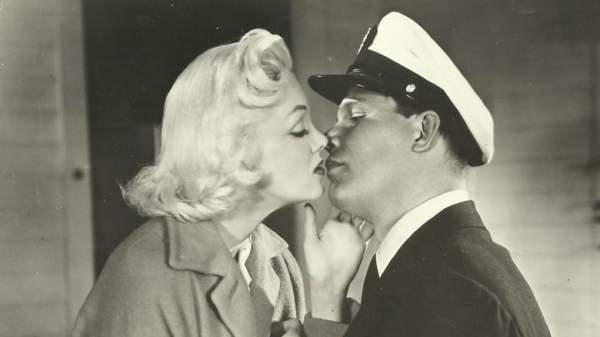 Look no further than this Lesley Selander film from Allied Artists to get your chance to see just that.

Brand scores above the title billing here opposite his leading lady, Jan Sterling, in this tale of an aging navy vet who meets a lonely WW2 widow working as a waitress in San Diego while he’s on shore leave. Sticking with Brand’s reputation as a man of action, the film begins with our rock faced leading man heading a group of sailors including Alvy Moore and James Best on a daring night mission to blow up a bridge in Korea during the Korean conflict. Though the film has the co-operation of the Navy and the use of it’s ship the USS Maddox, it’s during this opening exercise that the budget restraints are all too obvious on screen.

It’s a successful demolition and the ship then heads back to San Diego to give the crew a break. Brand’s the second in command next to Paul Langton and quietly leaves the ship once the sailors have met their loved ones at the shipyard or headed to shore in search of wine women and song. Brand will find himself pouring his heart out to barkeep, Lloyd Corrigan and feeling little pain. Miss Sterling is working the bar and overhears Brand’s story that mirrors her own. They’re both lonely people with no one to turn to and life is passing them by. 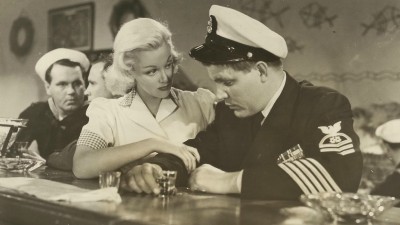 It’s Jan who will ensure the drunken sailor gets to his hotel room safely. For his part Brand awakens thinking he’s been “rolled of his dough” and is pleasantly surprised when he discovers his wallet and money are still intact. It’s around this point in the film’s 80 minute running time that we’ll meet another character actor who has landed himself third billing and plenty of screen time, John Doucette. A welcome addition to most any film, John is playing a cabbie who befriends Brand while at the same time looking out for Jan. We’ll soon learn that it was his brother who was married to Jan and killed in action at Pearl Harbor. Jan and Neville will hit it off and before Brand heads back to sea the pair will set in motion their future plans for life after his navy days are through. Until then there’s one more tour of duty ahead for Brand that will lead to the film’s best action sequence when his ship is under serious attack from enemy aircraft. Plenty of newsreel stock footage will end up in the battle scenes to give it an authentic feel amidst Brand, Best and Moore running about the deck dodging bullets and bombs from above. 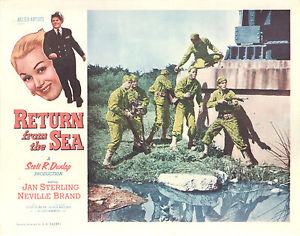 Following the battle there’s still the matter of Brand making it safely back to the loving arms of Sterling. Or not. The war and mistruths concerning Sterling’s intentions are still ahead before the fadeout in this script written by George Waggner. Fans of the Universal Monster classics should be familiar with Waggner’s name as he directed not only Man Made Monster but the now classic 1941 thriller The Wolf Man.

Can you just imagine the director Lesley Selander was actually slowing down with only four films released during 1954. He had directed six in ’53, seven in ’52 and an incredible nine in ’51. You might find Selander’s name beside the definition of the word “prolific’ in Webster’s dictionary.

Top billed Jan Sterling was a popular leading lady amongst casting directors at this point in her career. In 1954 alone she play opposite Brand, John Wayne, Robert Ryan and Brian Keith. I would wager most fans of classic Hollywood might recall her role opposite Kirk Douglas in Billy Wilder’s Ace In The Hole before any other. By this point in his career, Brand had famously bullied the likes of William Holden in Stalag 17 and others including John Payne, Rock Hudson and Glenn Ford so to see him here as a lonely aging sailor pining for a sweetheart must have been a unique movie going experience for those who frequented movie halls in 1954. For his part Brand more than handles the mixture of action, heartache and romance just fine opposite Jan.

Not a title you’re likely to see pop up too often so keep your eyes peeled to the TCM schedule which is how I located the film. It also got me digging around the vault here at Mike’s Take to confirm I did indeed have an original 1954 lobby card that highlights the tough guy side of Brand in fine fashion. It’s also a good way to remind one and all that lobby cards offer a great opportunity for film fans to build a collection of movie memorabilia at an affordable price.