It’s an old plot with a leading actor who had by this time played the same role for years but why should that bother me or my enjoyment of a film that sees a couple of great character players turning up for the fun. Then there’s a sexy leading lady and heck, even a plot twist I didn’t see coming in this RKO programmer. One that allows the director, Edwin L. Marin, a chance at a couple of neat camera tricks that stand out from the usual gangland fare of the era. 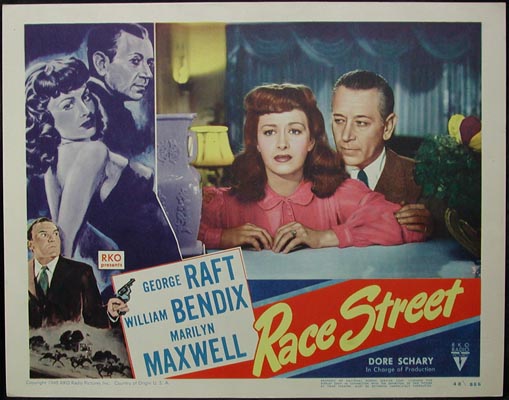 It’s George Raft once again taking on the role of the “good” gangland character. He’s a bookie with beat detective William Bendix for a pal and Harry Morgan as another bookie. Morgan’s had a bad leg since childhood (polio?) and Raft’s been his protector ever since. Lastly, Raft has a beautiful “dish” on his arm played by Marilyn Maxwell. Just as Raft is thinking of leaving his chosen racket and going straight and settling down with Marilyn, a new gang has moved into the San Francisco area selling “protection” and they’ve targeted the bookies around town as easy marks. 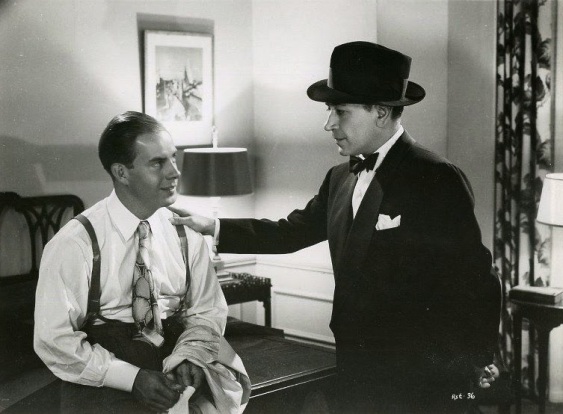 Raft an easy mark? I don’t think so.

Bendix knows that a new outfit is pressuring the bookies but nobody’s talking. Raft figures it’ll blow over but when Morgan is tossed down a flight of stairs as an example, Raft plans on executing his brand of justice against the warnings of pal Bendix. Now it’s Raft who has to figure out just who is behind the killing and running the protection racket. The killing has done nothing to move Raft and the other bookies who look towards him for advice in the direction of paying off. The only thing Raft will be paying off is the ring leader for Morgan’s murder.

William Bendix made a career out of playing the loyal yet somewhat dopey character always complimenting the leading actors. Most notably opposite Alan Ladd. Here he is doing the same bit supporting Raft but as a detective with a penchant for reading detective novels. He just isn’t as dim witted as one might suspect. He’s going to reveal the key for Raft in finding his quarry and the two of them will be there when that surprising twist I mentioned comes at them with a head of steam and the subsequent shootout. 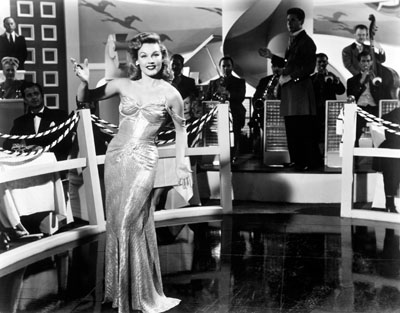 As Raft’s bookie is attempting to go straight, he’s opening a nightclub that gives this RKO release a chance to feature a couple song and dance numbers from Gale Robbins. One of these allows the director to stage an elaborate camera maneuver that I had to watch closely wondering if it was utilizing a projection shot. It wasn’t and I was impressed. If you’ve seen the film then you’ll know the sequence I’m referring to. It’s during one of the nightclub scenes that Bendix gets his best line of the film when he finds himself dancing with Miss Robbins.

“Gotta look like Cesar Romero to handle this kind of music.” as he trips over his two left feet.

As for Raft? He gets his customary lines that by this time he was probably saying aloud while sleeping. “Don’t bet on horses. It’s a sucker’s game.” or the threatening, “There’s a little errand I gotta take care of.” 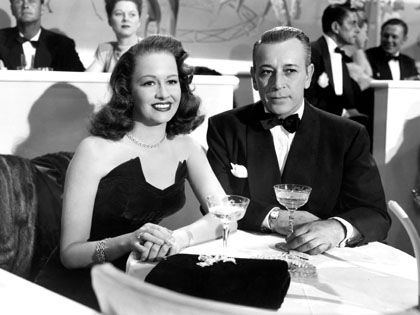 Way down the cast list as in the unbilled extras I spotted Charles Lane and George Chandler. These guys were around so long they were still appearing in movies when I began frequenting movie houses in the late 70’s. For those that picture Miss Maxwell as another blonde bombshell, you might be surprised to see her starring here as a brunette. And still captivating I’d like to add. Director Marin died in 1952 after a succession of Randolph Scott westerns but prior to that he teamed with Raft on a number of gangland flavored films throughout the 1940’s. Titles including Johnny Angel, Nocturne and Mr. Ace.

Race Street was another of my recent laserdisc acquisitions. Not having a copy of this one previously it was a first time viewing and while I’m the first to admit Raft is no Bogart or Cagney, it’s watchable with a very good cast surrounding George for a fast paced 79 minutes. 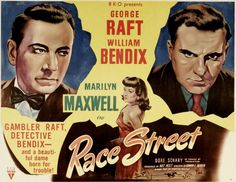