I have absolutely no idea how many spy films and attempted franchises were made in the wake of the enormous popularity of Ian Fleming’s Dr. No. Sean Connery and James Bond became household names and the attempt to cash in on a good thing began. Harry Palmer, Matt Helm and Derek Flint achieved some success in the aftermath and when the Bond follow-ups proved Dr. No was indeed no fluke, the race was on for various producers and companies to get a piece of the box-office pie.

So here are three titles I binged on with some well known names. Or should I say last names? 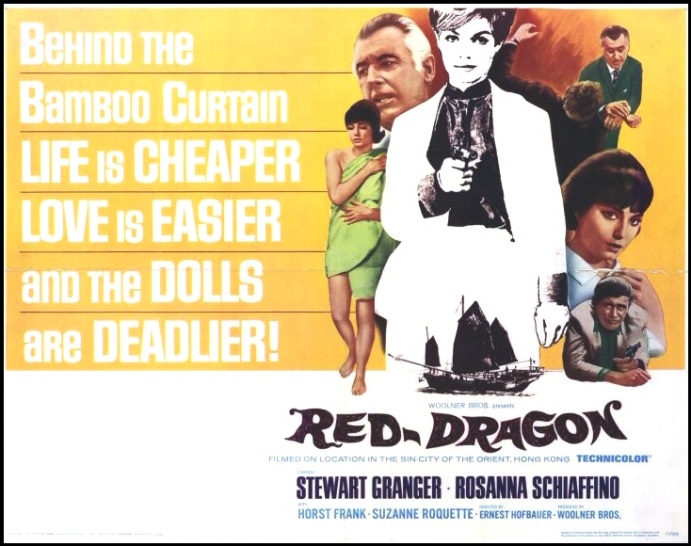 With the glory days of MGM and Hollywood behind him, good old Stewart Granger is about to begin a holiday from the spy firm. That is until word arrives that a fellow agent and good pal has been murdered in Hong Kong. He’s quickly put on assignment and wastes little time in scaring up a lead which in turn leads him to Rosanna Schiaffino who will serve as his contact. She’ll also infiltrate the suspected organization behind the death of Granger’s pal. She’ll also carry a watch with her that acts as a custom made two way walkie talkie to keep in touch with Stew. Just like the Bond films I suppose.

Strictly by the numbers, we’ll get some repetitive scenes of car crashes, fisticuffs and a constant switch in just who has the drop on who. Just when Granger thinks he’s ahead, he’ll find himself cornered and subject to a good thrashing at the hands of the goons under the control of the criminal mastermind he aims to take out played by ……………. That identity is a secret so you’ll have to drum up a copy of this one yourself to fill in that blank. I wouldn’t act to surprised either when the guilty party is unveiled.

I found this one via the VHS version, Code Name Alpha. Granger plays it light and carefree ala David Niven. He’s never too serious and leads his quarry into thinking he’s rather goofy though we all know it’s a façade to lure the baddies off their game and let their guard down. He might even find time to romance the lovely Rosanna.

A time waster for the Granger fans or those who love to catch all those Bond influenced flicks that populated the theater screens along with spaghetti westerns by the hundreds during this period of cinema in the 60’s.

It’s hard to come up with a better choice than David Niven himself to play a Bond like character with a penchant for tongue in cheek remarks and an eye for the ladies. Niven does just that when he’s called into active duty after … you guessed it, agent Cyril Cusack in Beirut has gone missing. Niven is a former WW2 operative long since retired from service and now living life as a carefree doctor about town with an eye for antique cars and the ladies.

Conned into the job by John Le Mesurier and handed a “do it yourself spy kit,” Niven is on his way and quickly comes into contact with a beautiful double agent played by Francoise Dorleac. Niven is sidelined enough in his attempt to bed the lovely lass that he misses his next flight. This turns into good fortune for him as the plane explodes shortly after take off in typical spy film fashion. When he starts tracking his predecessors final movements, Niven will come into contact with an ally played by Nigel Davenport.

Like a good many Bond films of these early years, the Russians are the enemy in this game of spy and seek. There’s an assassination to foil if Niven can put the pieces together and a beautiful woman to convince she’s on the wrong side. As is customary in any spy film, David will have to undergo torture and violence to his well being before turning the tables on his captors nearing the end of the film directed by Val Guest. Even my homeland of Canada gets to play a small part in the final stages of the plot.

Spies is a bit long at nearly two hours and Niven plays it comically though I think most any other doctor plucked from his practice would not nearly have handled things as smoothly as Niven. Supposedly this was to be the first in a series of Niven flicks as the character Jason Love but alas it wasn’t meant to be. Tune in for some classic Niven fun, the cold war and some bad model airplanes if you get a chance.

Leading lady Dorleac was the older sister to Catherine Deneuve. On the verge of international stardom, she was tragically killed in a car accident in 1967 at just 25 years of age. Her final film, Billion Dollar Brain, itself a Harry Palmer spy film, was released following her death.

Let’s start by saying, YES this film really does exist in case you’ve never heard of it. It’s taken me this long to finally see it but in my travels I came across a VHS tape under the Operation Double 007 title. It’s really a wonder it got released at all as it plagiarizes so much of the Connery films even going so far as casting Bernard Lee as an M like character and Lois Maxwell as a very Moneypenny(ish) assistant to him. The similarities don’t stop there either.

Ennio Morricone takes the music credit on this Alberto De Martino film and even the score comes mighty close to that iconic Bond theme! Next up we get Bond villain, Adolfo Celi, surrounded by a bevy of beautiful women including Bond girl, Daniela Bianchi. Using a remote control device, Adolfo pilots a car into an oncoming plane taxiing down the runway. Explosions follow and the intended target is dead. I guess I could go on explaining this plot that sees Celi and fellow Bond villain Anthony Dawson intent on world domination with the most lamest idea I may have seen yet. There intent is to prevent all man made mechanical devices from operating. I just don’t see how they’re going to get ahead with this idea. Even there own guerilla army’s guns won’t fire!

Anyway the fun with this film is in the nods to the Bond series and the obvious casting of Sean’s brother Neil to take on super spy duties.

“I don’t think he’s quite as good looking.”

“You read to many novels by Fleming.”

Bernard Lee’s M even pips in with, “You should have seen your brother’s face.” when the mission is completed.

For whatever the reason, Connery is dubbed here and his character, like his brother is pretty much an expert at everything. He’s a plastic surgeon, an expert in Karate, a hypnotist, a lip reader and a champion at archery. The fact that he belongs to an archery club pays major dividends and unintentional laughs when he calls in his band of merry men at the conclusion to battle all the nameless army of soldiers under Celi’s command.

Essentially Sean’s 007 isn’t available for this current threat against the world’s population so why not bring in his little brother to take on Celi and company. This one really does need to be seen to be believed. And I’d like to point out it’s nowhere near as bad as I expected. It’s just bad in a funny/good way.

I could have selected any number of Spy flicks from this period and might do a part two just yet. Any titles that you’re a fan of outside of the Bond/Helm/Flint/Palmer flicks? Spoofs are always welcome too.