I’ve long held to the notion of referring to Vincent Price as a friend despite having never once met the man. Based on the many interviews, books and articles I’ve read about Price, I’m truly sorry I was never given the opportunity. He was just always “there” as I grew up. He was on late night television in movies I couldn’t wait to discover for myself and he frequently would turn up in series reruns of shows I’d watch like The Brady Bunch or his narration gig on The Hilarious House of Frightenstein. Let’s not forget his cartoon work either on shows like Scooby Doo as Vincent Van Ghoul.  His charm and persona would frequently be put to good use in commercials like his pitching for the board game Hangman.

I’m spotlighting Price to kick off a theme I’ve been anxious to work on. Selecting some of my favorite stars and character players who did extensive work in television either as a training ground for those on the rise or for established stars to stay busy plying their trade. So here is a small sampling of the many appearances Mr. Price entertained us with on some of the weekly TV shows that populated his era.

“So This is The Wild West.” 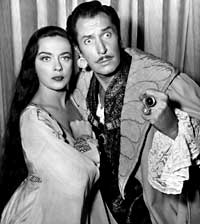 Price gets a tailor made character in this western outing that sees him as a traveling Shakespeare actor with Patricia Morison as his wife/leading lady. The pair have found an adoring fan when they perform scenes of Othello in San Francisco. It’s none other than the cultured gunman, Paladin, as played by the rugged Richard Boone. When their stage performance is over, the pair meet Boone for a late night dinner at which point they let him know they are off to San Diego next. Boone interjects with some stern warnings that disrupts their friendship. Boone is adamant that it’s not the place to go. It’s full of cow hands hitting town after round up, drunks and bandits. Boone doesn’t see a promising welcome for the gentle Price and Morison or the plays of Shakespeare.

Morey Amsterdam plays the promoter bringing them to San Diego. He’s playing up the fact that Morison is coming to town as kind of a Lily Langtree while he ruffles the feathers of Price with his secondary billing on the poster, “with comical Charlie Matthews.” This blow to Vincent’s ego sets him off on a fun temper tantrum that is a sheer pleasure to watch. Vincent will quickly run afoul of a gun slinger in town planning to claim beautiful Morison as his own. Thankfully Boone has made the journey as well to ensure that Price and Morison won’t have any trouble during their Othello performances.

“All the world’s a stage” Price points out as he captures the hearts of the cattle hands gathered round in this light hearted episode of the long running show that was smart enough to allow Boone the odd comical script along the way to taming the frontier from his headquarters at the Hotel Carlton in San Fran. This episode also allowed Price to work with long time western director Andrew V. McLaglen and Richard Boone during the heart of his popularity.

Arrogant, sure of himself and very much in the tradition of Sherlock Holmes, Vincent appeared in this episode directed by The Master himself. He’s a world famous detective with a trophy case representing his greatest cases. All is well until he’s paid a visit by James Gregory (love this guy’s voice). Gregory has always been a lawyer for the defence but has yet to go up against Price in the courtroom. While he’s been overseas, Vincent solved his latest case that has sent a man to the gallows. Doubt creeps into Vincent’s mind as Gregory tells the story of some key facts that never came up in the courtroom.

Essentially a two man play with some flashback sequences tossed in as each tell their side of the story/case, both Price and Gregory are a good match on screen. What’s of note is the fact that both actors had such a distinct voice that there is no mistaking them for someone else. I love the fact that Gregory went on to play General Ursus under all that make up in Beneath the Planet of the Apes.

When Price worries that Gregory just might be correct with his accusation that Price has sent an innocent man to his death, what’s poor Vincent to do if he’s going to protect his sterling reputation?

Joining in the comedy troupe, Price shares his opening skit with Carol as the obnoxious Fireside Girl, Alice Portnoy. Vincent is a mystery writer at a book signing and awaiting a local news cast to interview him. Vincent is the straight man here to Carol’s shenanigans as she goes about extorting money from him. First she’s just looking for donations and when the paltry change he throws her way isn’t enough, the blackmailing begins. First there is the young blonde she claims to have seen him with and secondly the plot holes in his latest mystery best seller. If he isn’t careful, she’s going to take poor Vincent to the cleaners. 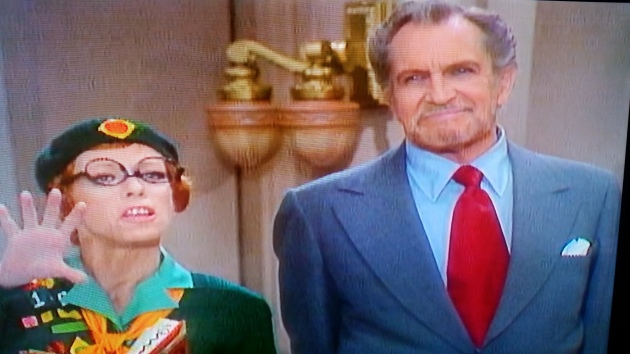 The gem of this show for Vincent is where he plays an understudy to Harvey Korman’s arrogant star of Broadway. Korman is starring opposite Carol’s equally egotistical actress while Vincent and Vicki Lawrence have waited patiently in the wings for a chance to go on stage to capture their own stardom. As this is closing night, it isn’t likely to happen and Korman and Carol let their understudies know it with little gratitude or compassion.

Our two underlings then set out to ensure the opportunity to claim some stage time in a fun interchanging of actors at various points in the play. On one hand, Carol is in the arms of Korman only to suddenly have Price take his place while Vicki does her own bit of tricks to upstage Carol. A fun time to be had here with Vincent going full tilt with the three comedy vets.

Next up, Vincent gets to stand in for Ralph Waite as the Father on The Walnuts which features Carol as John Girl. It’s all rather silly where the family would much rather wallow in poverty as opposed to sell Walnut Mountain and move to greener pastures. The customary “Good Night’s” end the skit with Korman a hoot as Grandpa Walnut and Vicki Lawrence looking every bit her Mama character as Grandma.

Included are a couple of other bits that Vincent appears in proving his diversity and willingness to mug for the camera and always looking as if he is having a grand old time.

In her most recent book on store shelves detailing her years on the show, Carol points out that, “Vincent was an absolute hoot.”

More to follow in part two including Vincent rejoining his first ever leading lady from the stage in 1935 on the small screen in the 1970’s.

Before signing off for tonight here’s Vincent with a special farewell.