This article on The Badlanders was published in The Dark Pages celebration on the film The Asphalt Jungle. Read on to find out…….

In 1941 Humphrey Bogart starred as gangster Roy Earle in High Sierra. Eight years later in 1949 the film was remade as a western with Joel McCrea taking over the lead role of the outlaw. Along comes John Huston’s classic The Asphalt Jungle in 1950. Similarly, eight years later it to was remade as a western titled The Badlanders featuring Alan Ladd and Ernest Borgnine.

By the time of this film’s release in the days before VHS and regular television airings the general public would not likely have connected the dots to this being an actual reworking of W.R. Burnett’s source novel that was adapted by John Huston and Ben Maddow for the gangland version. This time the source novel’s western adaptation to the screen was credited to Richard Collins.

Delmer Daves served as director this time out and was on a run of solid westerns including The Last Wagon, Jubal and 3:10 to Yuma. Here he re-teams with Alan Ladd after having some success with Drum Beat in 1954. One might assume that Alan is playing the Sterling Hayden role but surprisingly his character, “The Dutchman” is more in line with the Sam Jaffe role. That of a heist planner. The Hayden role has been molded to fit Ernest Borgnine this time out in a role that lets Ernie play it both ways. The vicious Ernie with the fiery eyes and the soft hearted “Marty” we all know him to be.

Our tale begins with both Alan and Ernie serving time in an Arizona prison circa 1898. Our two stars don’t exactly get along on their chain gang work detail. Still Ladd saves Ernie from making a costly mistake and finds himself paroled early along with Ernie. Borgnine has just finished serving a ten year stretch. Each go their separate ways yet Ladd feels he owes Ernie for his early parole and no self-respecting westerner wants to leave any debt unpaid.

Alan quickly returns to the town where he was set up and sent to prison. It seems Alan is a mining engineer and geologist. After locating gold ore in large quantities, he claims to have been set up by his previous partner and sent to prison. When the local sheriff played by western regular Karl Swenson spots him in town, he wants him aboard the next day’s stagecoach, “Unless you wanna see your own gravestone on your way to hell.”

At 83 minutes compared to the Jungle’s running time of 112 minutes, Alan goes right into action with less attention paid to fleshing out the characters. Part of the action for Alan is making the acquaintance of a gorgeous “kept” woman just across the hotel hall played by Claire Kelly. It turns out that the man Ladd needs to speak to about a planned gold heist is her benefactor. It’s Kent Smith subbing in for Louis Calhern and Kelly in the Marilyn Monroe role. 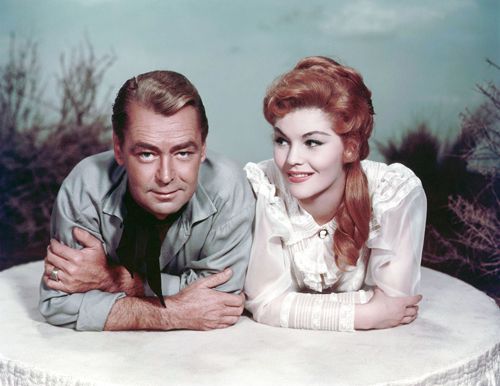 Soon thereafter, down on his luck Borgnine rides into town. He’s quick to make enemies with local hombres led by Anthony Caruso. Big hearted Ernie takes exception to Caruso and some rowdies manhandling lovely Katy Jurado. Ernie and Katy are quick to become a couple much like Sterling Hayden had Jean Hagen in the earlier version. With Ladd needing help he turns to Ernie with an offer of gold and a chance to repay his debt.

It should be noted that character player Anthony Caruso also appeared in the earlier version from John Huston. It’s actually one of his best roles as a member of Hayden’s ensemble gang. For the remake he’s putting in time as a thug which he was known to do in countless Ladd films. The two were off screen pals. Taking over the role Caruso had played earlier, MGM cast Nehemiah Persoff in the role of the quiet man trying to make a better life for his family.

Moving along quickly and securing a deal with the slippery Kent, a good portion of the film takes place beneath the earth in the mineshafts that Alan had engineered and planned before his incarceration. Bravo to the effects team as it’s really the highlight of the film. The trio descend into the bowels of an abandoned mine that runs parallel to an active one where Alan had sealed off a high grade vein of ore. With expert precision they time there digging and explosives to that of a digging crew in the next mine shaft.

There are sure to be complications involved as Alan and company try to complete their dealings with Smith. This is a western after all and a customary shootout has to erupt before the final fade out with Collins script differing quite a bit from the bleak narrative of Huston’s Noir classic.

If you happen to have picked up a copy of The Badlanders from the Warner Archive series then be sure to check out the trailer included on the disc. It boldly states that our two lead actors are “Two of a kind, Violent! Valiant! With sultry Katy Jurado and raging action!”

For the history buffs it should be noted that Borgnine and Jurado were married shortly after the completion of this film though their wedded union was not long. They were divorced in June of 1963. During their time together as a couple they would also appear in the big budget Richard Fleischer flick, Barabbas in 1961.

Keeping in mind that this was a somewhat slimmed down version of the earlier script, the music betrays it’s budget. If you’ve seen the classic Universal thriller The Creature From the Black Lagoon then you know the soundtrack that plays when the Gill Man makes his intentions known on poor Julia Adams. Snippets of the same recordings can be frequently heard at key plot points here as Alan and Ernie face off with danger and certain death.

Alan Ladd was nearing the end of his career and his prime years as a box office attraction had already passed. Still he commands top billing here over recent Oscar winner Borgnine. Ladd would also star this same year in a film that is just now being rediscovered and a personal favorite, The Proud Rebel. Rebel teamed him with his own son David and Olivia de Havilland.

Borgnine on the other hand was really just getting started and thankfully would keep on acting into his nineties before passing away recently in 2012. Along with Alan, Ernie has left us countless movie memories to look back upon and smile.

No classic here in this western redo yet a passable effort and if one had no idea it was a reworking of the Burnett/Huston story then it may play better as you wouldn’t be doing the inevitable comparing of the two. Let this one stand on its’ own and you’ll feel better about the whole endeavor.