Taken from a Saturday Evening Post story by Eugene Manlove Rhodes, this western feature presents Joel McCrea in another likable role though this time he’s an outlaw on the run from sheriff Pat Garrett as portrayed by Charles Bickford in an equally agreeable role. 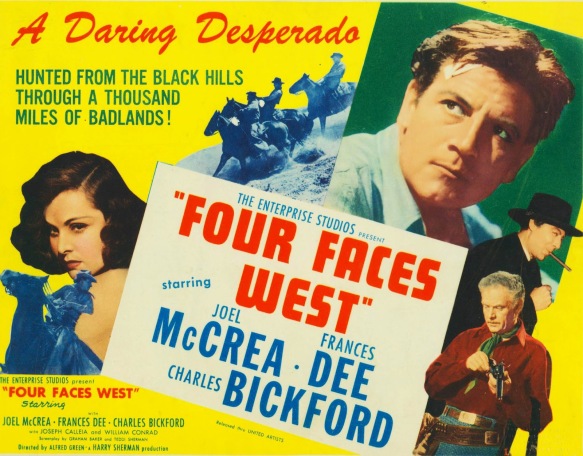 Four Faces West offers viewers a different western from the era when the genre was really hitting it’s stride. Thanks to the screen persona of McCrea, the film has a light jovial feeling to it which unveils itself at the outset. Just as a town committee is welcoming the newly appointed Garrett/Bickford as their peace keeper, McCrea gently rides into town and promptly borrows some money from the local bank at gunpoint.

Bickford will end up leading the posse with a firm hand. While the posse members track McCrea, our leading man ditches his horse and times a jump onto a passing train. On board are two characters who will play a major part in the proceedings still to come. A rather shady looking Joseph Calleia who witnesses McCrea’s jumping the train and Frances Dee as a young nurse heading west for work and quite possibly adventure.  Having sustained an injury, McCrea is tended to and falls for the pretty young woman who just happens to be single.

McCrea may have caught a train but he can’t outrun the wire service and when he narrowly tricks some lawman at the next station, Calleia knows the truth and overhears the reward figure of $3000. Even lovely Dee has her suspicions though that doesn’t stop her from falling for the handsome, genteel McCrea. Attempting to hide from his past, McCrea winds up getting off at the stop Dee is scheduled for and takes a job at a local ranch. When the law gets a little too close, McCrea gets a great line about his new job, “If they catch the bandit, I’ll quit.” Humorous moment at which point Calleia has trouble keeping a drink down.

Bickford proves to be a relentless pursuer and engages help from the likes of a young William Conrad. When McCrea decides to ride on he does so with Dee at his side though the plot is going to go in a direction far different from the western he would make the following year, Colorado Territory.  This 1949 oater was a  Raoul Walsh reworking of his own High Sierra. I won’t delve into further plot points but will say the film has a feel very much akin to another film released the same year, John Ford’s The Three Godfathers. McCrea and Miss Dee had already starred together in the 1937 western tale, Wells Fargo. 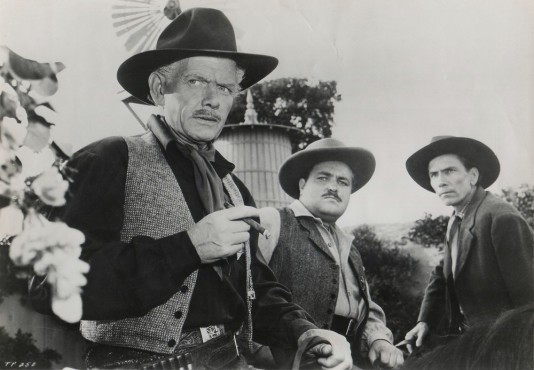 What makes the film both likable and a bit different are the actors. McCrea was an actor that was unmistakably easy to appreciate during his leading man years. He would most often be associated with the western from this point forward in his career. Frances Dee was by this time nearing the end of her career. Horror fans will always remember her for the Val Lewton chiller, I Walked With a Zombie. It’s both Bickford and Calleia that are somewhat surprising here in a good way. Bickford’s performance as Garrett is far from clichéd. He plays it with a wealth of wisdom and a fairness that he infuses in those who sign on to follow him as they hunt down McCrea. Calleia is practically a red herring here under direction by Alfred E. Greene. One almost expects him to go after the money but he is far from a back shooter and when the irony of the ending is upon us, we’re glad. 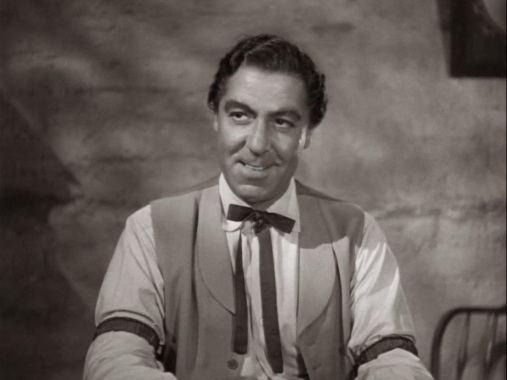 This McCrea effort came highly recommended to me and it didn’t disappoint. Just wasn’t what I expected going in meaning a nice change of pace. Check it out and you’ll see why. I happened to find a VHS copy if your wondering where to locate it.