Aside from being introduced to movies I have yet to see, Kristina’s monthly assignments continue to nudge me into watching some of the movies I’ve had on my shelf far too long. Once again I have to thank her as this screwball comedy from genre master, Preston Sturges, is nothing less than a gem.

“Sex didn’t even enter into it.”

That’s a line you don’t hear too often in any motion picture released pre 1960 let alone in the forties.  We get to the line shortly after the madcap credits run their course featuring Joel McCrea and Claudette Colbert racing to the altar to secure their wedding vows. Fast forward five years and the young couple are straining to keep their marriage afloat. McCrea is an inventor in need of a backer while Colbert appears to be a well to do house wife living in a fully furnished apartment. Grand Piano and all. The problem is they’re broke and about to be evicted.

In Preston Sturges fashion, a zany man of wealth known as the Wienie King hands over a large wad of cash to Colbert that does nothing but hurt the pride of hubby McCrea leading to Colbert running out on their marriage after a night of lovemaking. McCrea isn’t thrilled and promptly begins chasing her down. Before he can get his arms around her, she catches a train and falls into the clutches of “The Ale and Quail Club.” The club consists of a bunch of gun toting, heavy drinking, aging party boys led by William Demarest. Character player Demarest was featured prominently in eight of Sturges directing efforts. With more comedy hijinks in store for our leading lady, she hooks up with Rudy Vallee and sees her loony adventure continue for the latter half of the film.

It turns out that Vallee is one of the world’s wealthiest men though he lives frugally. He’s never married but is on the look out for the perfect wife. On the other hand he has a sister who has been wed three times and twice had a marriage annulled played by chatterbox Mary Astor. Things are going to get romantically complicated when McCrea shows up only to be introduced as Colbert’s brother Captain McGroo. Astor latches on to him while Vallee makes his play for the hand of our fair lady. 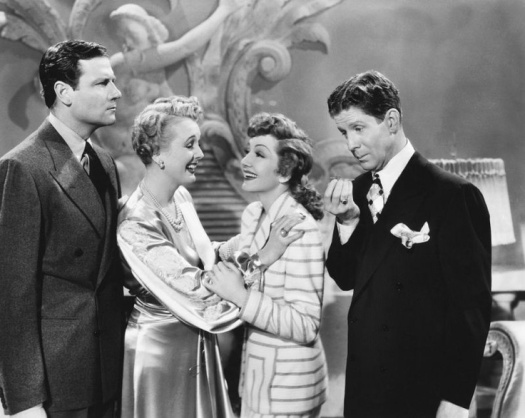 No more plot details. It’s all in the writing and rapid fire comic delivery that makes this zany effort worth watching.  For Sturges, this release represented a winning trio of titles in two short years that he both wrote and directed. Palm Beach, The Lady Eve and Sullivan’s Travels which also featured McCrea in a leading role. Colbert may be penniless for practically the entire the film but that doesn’t stop the plot from decking her out in one gorgeous outfit after another as was the custom of the movie world circa 1942.

Make sure you have a copy of this so that after watching it, you can go back and replay the opening segment. Don’t ask. You’ll catch on at the fade out to see what I’m talking about. And I do believe that was Mantan Moreland jumping in there briefly as the waiter on the train.

Did I mention this was my Mad Movie Challenge? Now it’s time to head over to Speakeasy where Kristina has been challenged to watch and review a seventies winner from a director and leading man it’s hard not to appreciate. I have a feeling she’s going to thank me.