“Mr. Richter wouldn’t murder anybody. He’s one of our best tenants.”

What if I told you that Mr. Richter was played by George Sanders in this black and white thriller featuring Barbara Stanwyck as a woman who is convinced she is a witness to murder as the title suggests? You’re probably thinking that that Richter / Sanders dude is capable of murder and so much more. 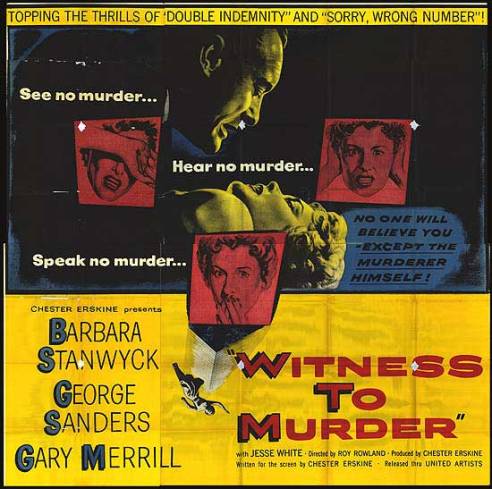 The fact is there is little doubt that Sanders is indeed a killer. Seconds into the film, Stanwyck peers out of her apartment window late at night and across the street in a parallel apartment sees a man killing a woman. Calling the police allows the script to introduce Gary Merrill as a detective with Jesse White for his sarcastic partner.

This is as good a time as any to point out that Jesse White made a career out of roles just like this one. Throw away insults and plenty of sarcastic comments made him a lovable ogre for years. People my age grew up with Jesse as the front man for Maytag. Even on those ads he would slip in some backhanded cheap shots.

Merrill begins looking into whether or not an actual murder has been committed but can’t link any incriminating evidence to Sanders in the middle of the night after paying him a visit. No body to speak of and George does his best at hiding the victim’s earrings. Sanders who seems a whole lot quicker then Merrill, deduces that the woman across the street has seen him commit murder and sets out to discredit her in the eyes of the law.

With no discretion or protection for the witness, Sanders easily confronts his accuser in front of Merrill. No wonder Barbara is so nervous for the balance of the film and kept on the edge of sanity as Sanders sets out to show she is mentally imbalanced and continually throwing accusations his way. Even to the point of sending him threatening letters by mail.

This will all lead to a classic Stanwyck break down which sees her admitted to a psychiatric ward for examining and getting grilled by the in house doc.

Romance? Maybe, as it sure seems Barbara and Merrill are getting along fabulously though even he is starting to believe her imagination has gotten the better of her. Perhaps the arrogance and meddling of Sanders will lead to his undoing?  It’s a cat and mouse styled murder mystery that may not throw us too many surprises but hard not to resist Sanders and Stanwyck playing to their strengths. 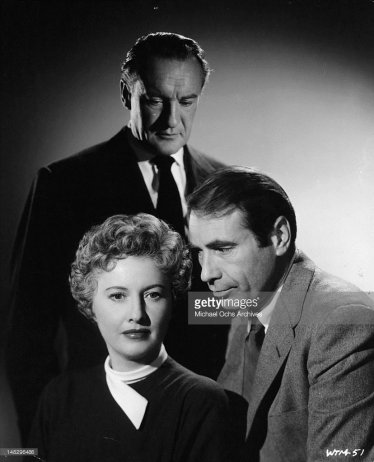 This Roy Rowland flick has a very Alfred Hitchcock TV show feel to it. Since it has a running time of 83 minutes, it could almost serve as a two parter. The music that plays over the edgy scenes seems to forever be in the state of a crescendo to give us all goosebumps. When it comes to film scripts of the past, I still chuckle at lines like, “Go powder your nose. I’m getting hungry.” This from the take charge Detective Merrill when he decides he’d like to take an unsure Stanwyck to dinner.

Obviously a “B” product in the career of Miss Stanwyck, it still serves as an opportunity to see her in a genre she excelled at. The murder thriller that has seen her as both the villain or the intended victim. Another staple of the past is the fact that she also narrates the trailer for the film. Something we don’t see much anymore from todays film actors.

Appearing in a small role as a police officer is a young Claude Akins who didn’t even rate billing which surprised me somewhat. Perhaps it’s just that I’ve always liked the burly character actor who moved from playing big imposing bad guys to a soft hearted TV star with ease in his later years.

Witness to Murder is now out on blu ray and part of a first rate box set from Kino Lorber that continues to put out some great titles with artwork on the covers to match. It fits quite nicely on my shelf. Click here for Storm Fear, another great title in the set.