Almost as if she’d been stolen away from the set of a Noir feature, this Warner Brothers’ western casts Patricia Neal as a woman who will leave lovers in her wake to become Queen of a cattle empire and use the likes of Steve Cochran to leave them for dead. 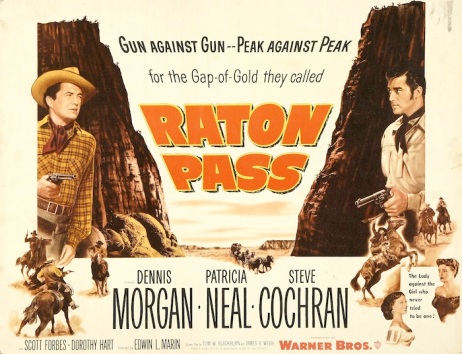 Neal arrives in a western frontier town by coach along with gunslinger Cochran. He makes a play for her but she quickly saddles over to the heir to a fortune in land and cattle, Dennis Morgan. By the fifteen minute mark they are husband and wife. Morgan and Neal are gifted the deed to the empire by the aging baron, Basil Ruysdael. It’s to be a short honeymoon when Neal comes to realize Morgan expects her to be a dutiful wife and have little dealings with the day to day operations of a ranch. 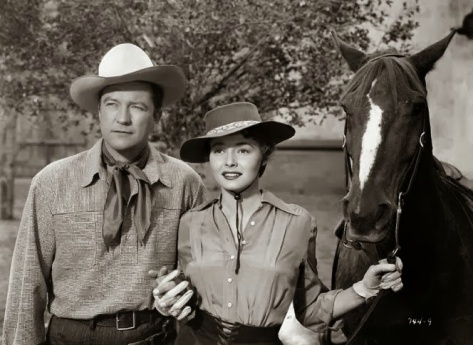 When railroad tycoon, Scott Forbes pays the ranch a visit to discuss business, Neal sets her bonnet to capture him and leave Morgan in the trail dust. When he catches his fair lady in the arms of Forbes, the plot takes on a bitterness as the two vie for the land and the power that goes with it.

“The Devil’s in a man who holds revenge.” 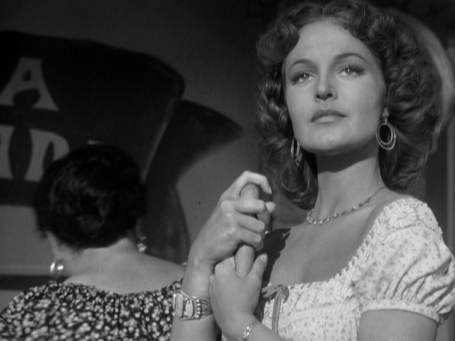 So says Dorothy Hart as the woman who longs for Morgan’s touch and one he’ll soon come to realize will move and heaven and earth to be by his side. Morgan’s plan to sell out to Neal and take all the men with him to the other side of the title’s Raton Pass almost backfires. Neal goes out and hires Cochran to ramrod using his guns to settle all disputes and bring in a gang of gunfighters to do the dirty work.

Up for grabs are the cattle and the water rights that Morgan and his father up to now had Lorded over the valley of nesters. Now he’ll turn to them for help to bring peace to the lands. Gunshots and plenty of blood and bodies are sure to follow before this Edwin L. Marin title plays itself out in a fast paced 84 minutes. 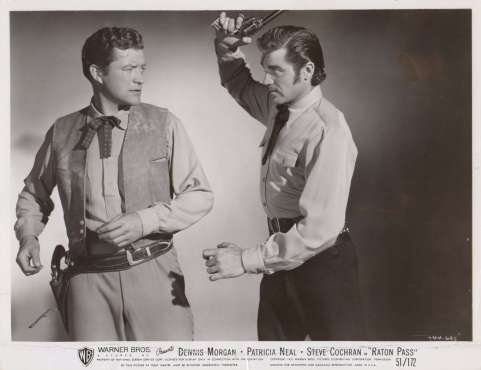 For me the western was just beginning to hit it’s stride by the time of this oaters release. With all due respect to a few superior films, the western was pretty much a John Ford genre and an all around ‘B” category. It’s the fifties and sixties that cemented the genre as a viable box office contender and offering bigger budget efforts though there were still plenty of fun “B” efforts with star power for the double bills.

Dennis Morgan does a fair job here in the heroic role though at the wedding to Neal, the Warner company still managed to ensure that Morgan gives us a song with a mariachi band playing along. It’s also notable that Morgan has to be one of the quickest cowboys to mend after taking a bullet to the back. No sooner does Hart cut the offending projectile from his flesh and he is back in action after being left for dead. 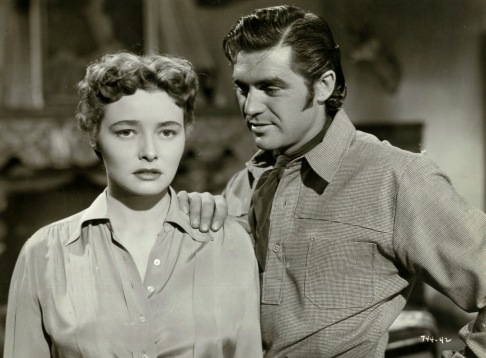 It’s Neal and Cochran that make the film watchable in the end. Like so many titles it’s the villains that make the film. Neal is giving as good here as any role that Barbara Stanwyck gave us in a western setting. It would have been totally suitable to allow Morgan a voice over saying “that dame was no good.” Steve Cochran excels here as well as the gunfighter who begins to see things sliding his way including the money, the power and the woman who deserves him. His role really allowed the script to crank up the violence to that of a gangster film.

Another TCM offering for those interested in the stars within or the western fan in all of us.