With Madrid as a backdrop, Robert Taylor mixes smuggling, adventure and Dorothy Malone into 98 minutes of passable entertainment in this late career entry. It was produced by his long time home studio MGM and directed by his frequent collaborator, Richard Thorpe. 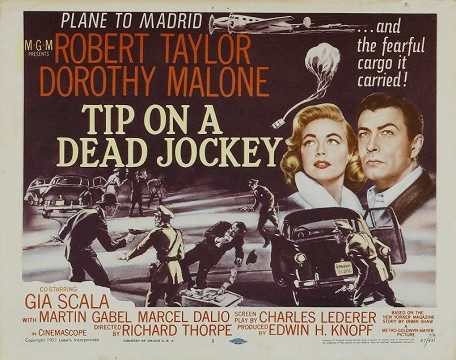 Miss Malone is seen at the opening of the film visiting her lawyer in Reno, Nevada. It seems her hubby has been overseas and never returned home after the Korean conflict. He writes her but only to tell her he isn’t coming home. In essence he’s deserted her yet she can’t seem to convince herself that they have no future together.

Cut to Robert Taylor laying next to Joyce Jameson. It seems she spent the night in his room but thanks to the final days of the “code”, it isn’t exactly made obvious that the two enjoyed a night of love making. The alcohol had been flowing heavy and Taylor seems rather disinterested in Joyce on the morning after.

Still, it looks good for the Taylor image waking next to a Marilyn Monroe(ish) blonde bombshell.

Exotic beauty Gia Scala makes an appearance next though we are soon to see that she’s not involved with Taylor though the script on more then one occasion implies that it is he who wishes that were the case. She’s married to Taylor’s war time buddy Jack Lord. Taylor’s free wheeling nights are about to come to a sudden stop when Malone arrives in Madrid looking for answers as to why the break off and as she puts it, “to find a new husband. ”

Now that the plot has set up the romantic angles, it’s time for a bit of international intrigue.

Martin Gabel is a local gangster looking for a flyer willing to take chances and Taylor fits the bill. He was a flyer during the war as well as a commander. The problem with Taylor is he sent far to many men to their deaths and hasn’t gotten over it. This leads to his internal struggle and fear of flying or getting too close to anyone. The best example of all is Dorothy Malone.

It’s pointed out to her that Taylor is a “A flyer whose lost his nerve and can’t fly anymore.”

Jack Lord is going to step up to the cockpit first on a trial run for Gabel but eventually Taylor will feel the pressure from Malone to step up and be a man and take the risk himself. Put his demons to rest. This is all going to lead to some intrigue and fancy flying to evade police and a fighter plane on his tail.

Can Taylor overcome his demons and find happiness once again with the love starved Dorothy Malone?

It’s a routine studio picture so what do you think?

Taylor was nearing the end of his box office glory days here and this really plays like a “B” picture compared to some of his other outings with director Thorpe earlier in the decade. The two had already worked on Ivanhoe and Knights of the Round Table together as well as All The Brothers Were Valiant. Compared to those three titles, this is a far more leisurely paced effort lacking in screen excitement.

The trailer for the film is quick to point out in it’s advertising campaign, “International intrigue and interesting women are Lloyd Treadwell’s hobbies.” With Taylor playing Treadwell, the focus of the trailer is largely dedicated to the Taylor strengths at the box office.

Both Malone and Scala get singled out as well. Malone for her recent Oscar performance and Scala as the promising newcomer.

Surprisingly in black and white considering Taylor’s recent run of films, perhaps this was signaling his days were numbered as a leading man of note. Either way, it’s of no consequence to me looking back. I enjoy the films of Taylor and always point him out to people looking to discover a star from the past whose name has somehow been forgotten in the mainstream.

I wouldn’t bet too much on this jockey but take a tip from me and give it a shot for another glimpse of star power represented here by Robert Taylor.

It’s available through the Warner Archive Collection making it a nice addition to my collection of Bob Taylor titles.