After receiving my invite for a TCM sponsored Starline Tours ride around Hollywood I didn’t hesitate to accept the invitation extended to those of us fortunate enough to be given media credentials while attending the festival. Remember, I’ve never been to the land where Chaplin erected a studio and Lloyd clung to a clock high above the city streets.

I’ll admit to wavering a bit on the morning I was to report to the loading area behind Grauman’s Chinese Theater. I would have been sorely disappointed at the amount of film history and the many shooting locations missed had I not shown up bright and early on the fest’s opening day.

Hey I know that gentleman welcoming us to the tour.

To the strings of Judy Garland singing The Trolley Song the tour bus gets underway. Along the route, there are custom videos showing on the big screen located on board with plenty of history and trivia facts from TCM’s own, Ben Mankiewicz.

The history references are plentiful for those interested in the early days of Hollywood. The TCM festival headquarters actually is stationed at The Roosevelt Hotel which hosted the original Academy Awards event in 1929. Apparently it’s haunted by Marilyn Monroe.

Having read more books on Hollywood history than  a typical Canadian has stickhandled a hockey puck, I was familiar with many of the buildings and landmarks pointed out to me in name only. Sure I’ve seen the pics but seeing things like the remodeled Brown Derby Restaurant building harkens back to the past when stars like Bogie would venture in for a meal. We passed studio gates like those at Paramount that have been featured in numerous films.

Smartly when the bus would approach certain streets and buildings, the video monitor  would cue up some clips from famous films that we on the tour could connect with the locations as we passed. Scenes right out of Ghostbusters threatened to come to life.

If it wasn’t pointed out to me, I wouldn’t have had any idea that a studio built by Charlie Chaplin still stands today. Not only that but it is now home to the world of Jim Henson’s creations. Then it’s off to bunker hill, once home to countless buildings and backdrops to the world of Noir. Time for a Ralph Meeker clip connecting us with the coolest set of hillside train tracks one is likely to see.

Even Ed Wood rates a comment on this tour when we drive by the Vista Theater. Apparently at one point Ed had an office above the marquee.

Two stops were made on the trip allowing us to get a look at separate locations that have been commonly featured in movies for years. Union Station, the place where William Holden once hunted a criminal and so many other actors plied there trade. Then there was the scheduled stop at the Bradbury building. I knew the name right away and admit to looking forward for a peek at the cool architecture within that has served as a backdrop in film for years. If you like the films of Charles Bronson then remember the climax of Murphy’s Law? That’s the Bradbury building. 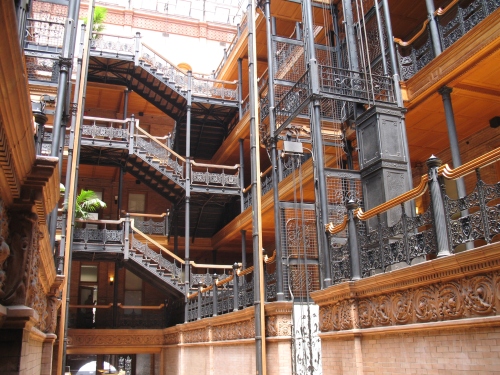 We journeyed through the broadway district, MacArthur Park minus the Richard Harris song and had Mae West’s apartment building pointed out to us. There were plenty of other locations and trivia bits thrown at us but I’ll let you discover them for yourself when you too make the journey to Hollwood Land.

Perhaps in hoping to satisfy more modern audiences, there were plenty of modern film references on the tour that didn’t seem to gel with this crowd of film history fans. I for one was registering zero interest on the location shoot for a Transformers movie yet was captivated at getting a look at the hillside stairs that were prominently on display in the Laurel and Hardy classic The Music Box.

A TCM event worth taking and for the tourist hitting town, a fun 3 hours with an engaging tour guide to enlighten you on the town’s history.

To be continued with what I really went to see …… The Movies! The Stars! All while eating on the fly!