Horror film legend Vincent Price himself, plays a horror film legend in this distorted thriller that served as a co-production from both Amicus and AIP. Along with Hammer Studios, AIP and Amicus were the leading innovators of on screen horror at the time of this film’s production.

Price stars as Paul Toombes. He’s made a career playing the character Dr. Death. The screenplays for the series of films have been written by another favorite of the macabre, Peter Cushing. It’s at a private party and screening that Price introduces his much younger fiance and meets producer Robert Quarry of Count Yorga fame. On this night, Price’s young bride to be will be beheaded leaving Price on the edge of sanity and unsure if he’s committed the heinous act himself.

Though he is never implicated in the murder, his career is in ruins and he becomes a recluse. Fast forward a few years and Price is talked out of retirement by pal and writer Cushing. Bloodshed and gruesome killings will commence shortly thereafter. It’s while visiting Peter that the two will sit back and watch some of Vincent’s old films. 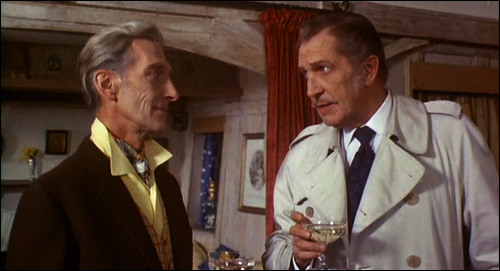 Thankfully since this is partially an AIP film, footage has been lifted from various titles of Vincent’s past including The Raven, The Haunted Palace and Tales of Terror. Special billing was awarded to Boris Karloff and Basil Rathbone on Madhouse’s opening credits which is admittedly a nice touch. Basil’s appearance prompts a great line from Price’s character, “Basil. I had some real help there.” I’d love to think that line may have been ad libbed.

It seems that a caped figure in black much like Price’s costume for his movie character is murdering people around our leading star. First a young woman attempting to black mail Price for a part in his comeback performance. Secondly, his leading lady who he isn’t fond of. She’s got the job based on her relationship with producer Quarry. There’s more to come before Price sets fire to the sound stage and seemingly goes up in flames as he did on so many of his early efforts for AIP during the Poe cycle. 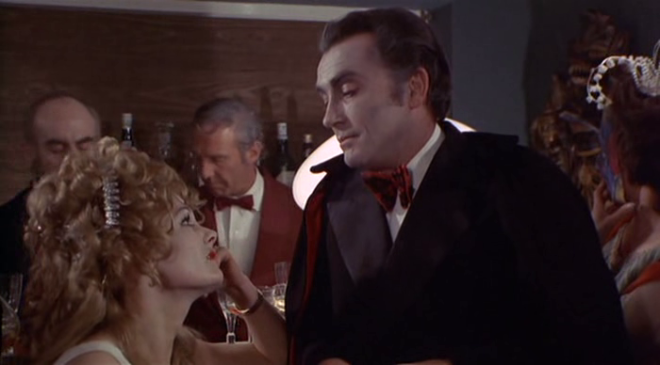 Things are not quite as they seem and we’ll be treated to a showdown of dueling Doctor Death’s at the film’s climax which will unveil our impostor and hopefully bring this lesser Price/Cushing film to a satisfying conclusion.

On paper this has a lot going for it. A pairing of Vincent and Peter is a momentous occasion for fans of the classic horror genre. One of the films failings is that it tries to take these two classical stars and move them into a modern slasher film of the seventies. It worked on Theater of Blood with Price but that film is really a hilarious black comedy, tongue firmly planted in cheek. On the plus side is the make up job on Price as Dr. Death, his alter ego. 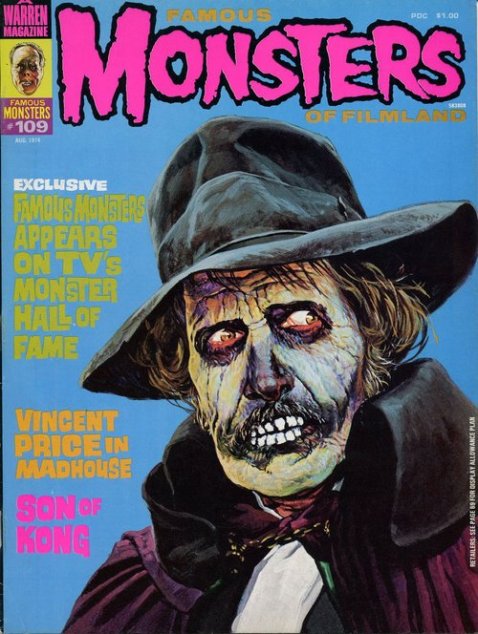 Madhouse makes for a lousy title that has no meaning to this 93 minute film from director James Clark either. You’ve got a great character within named Dr. Death. Use it. According to a bonus feature on the recent Kino Lorber blu ray release of Madhouse, there were plenty of re-writes involved on this the final Price film for AIP. Apparently Vincent was far from happy with the script upon his arrival in England where it was filmed. It shows because he doesn’t look to be having as much fun this time out.

There’s also a rather bizarre plot addition featuring Adrienne Corri as a disfigured woman with a fixation on spiders living in the cellar of Cushing’s English estate.

OK! Enough with the negativity because I’m sure I’ll watch this again due to my love and adoration for both Mr. Price and Mr. Cushing. Us fans are awfully forgiving at times. Price had a real good role here that could have added up to so much more but this one got away.

Trivia lover that I am, this film was the second that featured Price, Cushing and Quarry. The trio had all been in Dr. Phibes Rises Again though Peter’s role was rather small.

Madhouse is not the best work of these old pros but it’ll do.