Swedish import Mai Zetterling finds herself cast in the lead role of this Michael Anderson feature set during the fall of 1945. She’s arrived in England claiming to the be the wife of a famous writer and war hero who has been presumed dead. Nobody questions her claims and she’s welcomed into the writers estate by the care takers and when she unveils the last written novel from her late husband, the greedy publishers jump at it. 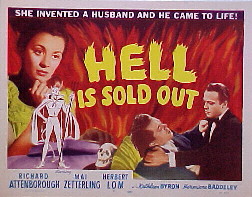 The title of the book? Hell Is Sold Out.

Just as it hits the stands and turns into a smash hit, a group of soldiers are returning to their homeland after spending a good part of the war in a German P.O.W. camp. Among them is the famed writer portrayed by a very Charles Boyer looking Herbert Lom. Beside him is his best friend and fellow inmate, Richard Attenborough.

Lom is welcomed into his home by the long time caretakers who are shocked to see him alive and well. They warn him to be gentle and not upset the lady of the house too much with his sudden reappearance. He’ll have none of it and wants to know just what is going on and who is this lady masquerading as his wife.

Cue the crescendo as the music rises and Miss Zetterling’s face turns to one of shock at seeing Lom standing before her. Herbert wants answers and she freely admits the book on the store shelves was indeed written by her and that she is only taking what is owed her. He has no idea what she’s referring to at which point she let’s us all in on the reason behind the con job.

I won’t disclose the reasoning she gives as it wouldn’t be fair. What I will say is that the unveiling of her story is one that has the makings of a classic screwball comedy set up. But then, this isn’t a screwball comedy and though there are some funny situations ahead, it plays more to the dramatics.

For publicity’s sake, the duo remain husband and wife in the public’s eye for a period of time though Attenborough’s reappearance in the film complicates matters and we have a triangle of sorts in the romantic department of our leading players.

Each player does a fine job with the assigned role. Zetterling is quite fetching as the instigator of the plot who lands not one but two possible lovers. Lom is the playboy writer who is befuddled by what has happened to his career and the reasons why. I should point out not nearly as befuddled as he would become to the world over as Chief Inspector Dreyfuss. His most famous role. Then there is Attenborough as the third party with the heart of gold whose piano player/composer falls for Miss Mai.

I really wish this had screwball comedy written all over it as opposed to the dramatic slant. Then again I wouldn’t consider the casting of Lom and Attenborough akin to outright situation comedy. Still it’s a passable slice of entertainment that can fill a void while seeking out something to tune into. If you’re a Lom or Attenborough fan, than that’s all the more reason to do so.

Should you be checking into the list of credits as I frequently do at the start of any film to see if a name hits a memory or two, I noticed Jack Asher as the cinematographer here. Any student of Hammer Films should know that he is listed in the same role for all the early classics of the late fifties that the “studio that dripped blood” unleashed on the public.

This was a very early film in the career of the director, Anderson who would go on to bring forth some top notch films in the ensuing years such as The Dam Busters and the star studded Around the World in 80 Days of 1956. He’d also direct the final two films of screen legend Gary Cooper, The Wreck of the Mary Deare and The Naked Edge. 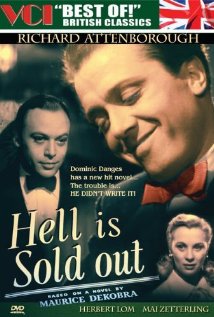 Hell Is Sold Out is available on DVD via VCI Entertainment.