When Edward G. Robinson’s soft spoken scientist catches Humphrey Bogart off guard he is quick to note, “a magnificent specimen of pure viciousness.” That he is but as usual, it’s hard to take your eyes off if the man who continues to fascinate movie fans world wide.

While many would classify Eddie G. as an on screen gangster and perhaps rightly so, he quite often played characters who were of a gentle nature or with a decidedly satirical bent towards comedy. Films like Larceny Inc. or Our Vines Have Tender Grapes. For this Warner Brothers feature from Anatole Litvak, Eddie is a well known doctor in high society circles who is dabbling in crime to further his research into the criminal mind.

Thankfully he has Bogie, Allen Jenkins, Maxie Rosenbloom, Ward Bond and Claire Trevor at hand to enhance his criminal activities and on the job experience.

Eddie has been sacking the safe’s of high society folks at swank parties. While emptying his latest cache of goods, he actually bumps into Bogie who is about to crack the same safe. Police are called in and Eddie walks out the front door with pal and local detective Donald Crisp who is trying to solve the high end thefts.

Bogie retreats to his gang and the ring leader, Claire Trevor.

Eddie meanwhile learns of possible fences from Crisp and makes his way to the Trevor hideaway and meets the gang. It’s Eddie’s best scene in the film as he does nothing but impress Ward Bond and the gang with his quick wit and fast maneuvering at embarrassing a detective who has crashed the gangs apartment. When the copper leaves hat in hand, Eddie is “in.”

Safe to say Bogie is far from happy as his strong arm tactics and aggressive authority are about to be severely challenged. 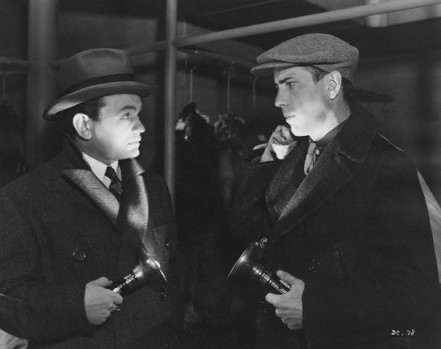 Robinson’s rather meek criminal is really a mastermind and even in the midst of a heist, he’s taking notes, pulses and checking pupils while taking notes the entire time. Naturally he too is getting swept up in the excitement of the caper. He’ll just have to watch his back as Jack Warner’s go to gangster is sure to attempt putting a knife squarely in the middle of it.

Things are about to take a turn when Eddie’s research is finalized and he tries to separate himself from the criminal element and Trevor who has clearly fallen for the classy Doc. 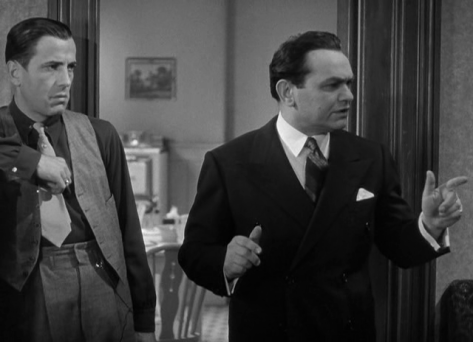 Can Bogie’s conniving ways get the upper hand and put him squarely back in the driver’s seat with Trevor on his arm? Check in with Eddie to see if he has a solution that works for his criminologist mind set.

Prior to his directorial breakout with The Maltese Falcon, John Huston was a noted scriptwriter and fixer. He is credited here along with John Wexley. If you give the opening credits a read through, there’s even a Dr. Leo Shulman receiving a technical advisor nod. Perhaps Eddie had a real life criminologist to guide him through the proceedings.

Bogie plays the same role more or less that he’d been saddled with since signing with Warner’s. King of the Underworld, Racket Busters, Crime School and Invisible Stripes are an example of titles he would appear in during the 38/39 years. That doesn’t make a bit of difference. He still causes you to focus clearly upon him when he’s on screen. This time with the gangland name, “Rocks Valentine”.

Joining in the fun is Gale Page, Vladimir Sokoloff, John Litel and according to the IMDB, Ronald Reagan voices a radio broadcast within.

On a final note, if your a fan of the 1955 Ladykillers, you’ll be quick to note the one scene early on when the gang arrives back at their apartment all carrying violin cases and when a knock on the door occurs, they all grab their instruments and fake their strumming to a record.

Our headlining trio would reunite for John Huston ten years later in the now classic Key Largo after Bogie’s star had risen to leading man status and Eddie was playing for me his greatest gangster role, Johnny Rocco. Miss Trevor would win herself an Oscar as Eddie’s one time faded paramour in the Bogie-Bacall favorite..

This comical tale makes for a worthwhile revisit or new discovery if you are so inclined.