The pinnacle title in the career of Chuck Norris is a very easy mark for fun and games and while I may do just that, consider it a form of flattery as this film seems to get more enjoyable with every viewing. Seriously!

For the uninitiated, Chuck plays a Texas Ranger looking to take down an arms dealer played by television’s Kung Fu, David Carradine. Opening with a wonderful homage to the music of Ennio Morricone and Leone’s dollar trilogy, Norris is trailing a group of modern day horse thieves. As the title tells us, he’s a lone wolf and has to move in to not only take out the thieves but rescue the Rangers held captive due to an inept arrest attempt. No problem for the Chuckster.

Ranger chief R.G. Armstrong isn’t fond of Norris’ old school tactics and reads him the riot act. “McQuade is a walking symbol of the brutal uncooperative, obsolete and discriminatory nature of the Rangers today.” Sounds a lot like comments directed at Dirty Harry Callahan back in the seventies.

Be sure not to miss Chuck’s shirtless gun shooting practice scene. It’s on his own custom designed range out back of the shack he calls home. The whole scene buys into the legend of Chuck. He’s rolling around in the sand, firing his guns and having the sand stick to his sweaty rather furry chest. Amusing to say the least and surely one that was bound to turn him into the sex symbol of the day.

Riding into camera range on horseback comes the exotic and stunning Barbara Carrera to the sound of L.Q. Jones quipping, “How would you like to bite that in the butt, develop lockjaw, and be dragged to death? ” One look at the tempting dish and Norris is in full agreement and will get his chance to do just that in time. Before he can get that chance however, he’ll have to meet and play ego games with karate expert Carradine. Not surprisingly, they take an instant disliking to each other.

Later when Barbara shows up at Chuck’s ranch house, the two launch into various insults when our beauty from Nicaragua realizes she can’t tame the wolf in Chuck. He just wants his beer in the fridge, his beautiful pet wolf at his side and to be left alone. Sure enough the tears begin to flow and the emotional Chuck Norris breaks out leading to the cinema’s sexiest love scene ever. At least the premier love scene involving one of the world’s most gorgeous creatures of the era, a running water hose and a conveniently placed mud hole. Truly this scene alone is worth watching Chuck Norris’ Citizen Kane.

Now it’s back to crime fighting and when Chuck’s daughter (he has an ex-wife) is indirectly involved in Carradine’s gun running operation, things get personal. The movie is headed for the ultimate showdown between real life karate champ Norris and TV expert Carradine. Just as you may think Carradine has the best of him, Chuck cracks a beer and empties that can over his face and head reviving him just in time to fend off the grim reaper. Utilizing a script right out of WWF Wrestling the duo engage in a one on one fight to the death where Norris is taking one hell of a beating till Carradine makes an error in judgement. When he lays a hand on Chuck’s daughter, he’s practically signed his death warrant.

Lone Wolf really is the ultimate flick for those that appreciate and get a chuckle out of the myth that has developed around Chuck Norris over the last few years. Director Steve Carver does a better than average job at giving us a modern day western styled as an Italian Spaghetti duster. The addition of old cowboy pros, Armstrong and Jones adds to the flavor.

Norris and Carradine seem to be the perfect match for an action flick released in 1983. Norris was cementing himself as an action hero while David excelled at both good guys and bad. Chuck would hang on for a few more years as an action star before losing steam and backing off to other challenges. His appearance in The Expendables 2 referenced this film when Sly refers to him as a Lone Wolf. If anything, the years haven’t made Chuck any better of an actor.

Carradine was always somewhat of a favorite with me though his descent into the video market was a bit of a downer. He wound up in so many low budget efforts that he seemed to irreparably damage his reputation until Kill Bill brought back some of the Carradine mystique late in life.

I have to be honest here, growing up in the early 80’s, Barbara Carrera was one of the sexiest women alive for me and quite a few of my teenage pals. She was the sexy Fatima Blush trying to take out James Bond in Never Say Never Again and bared all in the Mike Hammer flick I, The Jury. It’s safe to say she had the attention of young males everywhere.

As for this accidentally hilarious at times take on the Macho screen presence of Chuck Norris?

Enjoy the ride and appreciate the legend and myth of the bearded wonder. 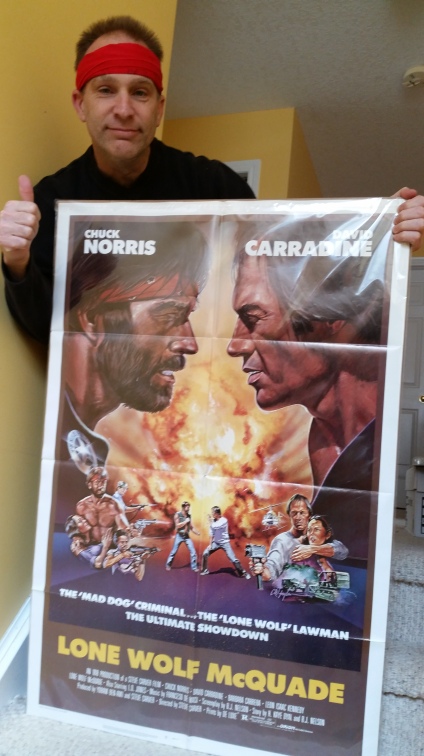