Theodora played by beautiful Irene Dune lives in Lynnfield Connecticut. She’s a young lady raised in the midst of a whole troop of “cackling old hens.” Things are about to liven up when local newspaper man Thomas Mitchell decides to serialize the hottest novel sweeping the country in his town paper. It’s written by Caroline Adams with a risque cover and a suggestive title to go with it, The Sinner. It turns out the writer is using a pen name. Care to guess who the real author is? 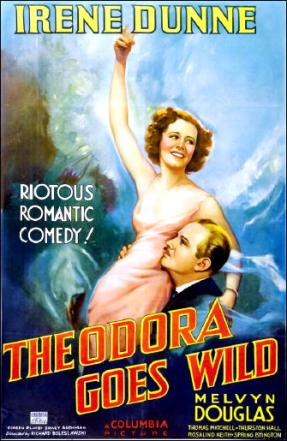 This winning comedy is laugh out loud funny. Irene Dunne in an Oscar nominated performance is feeling somewhat guilty due to the influence of the town busy bodies. Off to her editor she goes only to run smack into the artist who painted the cover for her book, Melvyn Douglas. He of course is attracted to the novelist who doesn’t look or act like anything she has put on the written page in the scandalous book that’s sweeping the nation. “But it’s not a clean sweep.” she’s quick to point out.

Getting her back up she makes a lame attempt at living up to her character in the book only to come crashing down amongst alcohol and nervousness at Douglas’ attempt at seduction. She hasn’t fooled him and just when she thinks she’s safely back in her little hometown and the anonymity from her famous book Douglas turns up threatening to expose her dual life.

Tongues are wagging as to who the new man is doing all the gardening around the Dunne home where she lives with her two old spinster aunts. The comedy escalates as Melvyn isn’t above making off handed comments to the parade of women nosing about. He’s bound and determined to get lovely Irene out of her shell and announce to the town just who author Caroline Adams really is. He’s about to get more than he bargained for when Dunne falls for him as he has some secrets of his own best left alone.

Turn about is fair play when he hightails it back to the big city.

I won’t go any further with the plot as I do my best not to play “spoiler” here. Let’s just say the laughs and gags are well orchestrated and while you know what’s coming there’s one that caught me by total surprise towards the end in this original story by Mary McCarthy and adapted screenplay by Sidney Buchman that really had me chuckling.

Dunne delivers a really solid comedic performance here going from the shy and guilty Theodora to turning the town on it’s ear with her scandalous novel and her attempts to put Douglas in his place after disrupting her life.

“That adorable young thing is an unholy terror on wheels. There’s nothing in the world more deadly than innocence on the manhunt! ” say the wagging tongues in Lynnfield. All the while Thomas Mitchell is having a ball selling papers once the plot moves into action. Mitchell is once again stealing scenes every chance he gets and just seems to convey what a go getting editor should be.

What’s attractive here in this Columbia production is the dual take on both the quiet country life that Dunne leads and the high society world where Douglas dwells. One’s just as bad as the other when it comes to scandal and the worry created by what others think.

Melvyn Douglas isn’t my favorite leading man from the era. Personally I would much rather have seen MGM lend Clark Gable once again as they did in 1934 to Harry Cohn’s little studio for this feature directed by Richard Boleslawski. Having said that Douglas does a fine job here and really plays up the scenes in Lynnfield as the new vagabond about town setting hearts aflutter and rumors flying.

This one’s a comic gem from the classic years of screwball comedies. Glad I finally took the time to give it a look.