Like William Bendix in Kill the Umpire I get a little bit of baseball fever when spring training camps open up and the 162 game schedule for Canada’s team is about to kick off. So into the movie room I ventured looking for something I hadn’t caught up with just yet and selected this Edward G. Robinson “B” production released by MGM with the co-operation of the New York Giants.

It’s a rather short 71 minute effort from first time director Robert Aldrich who would go on to much greater things than this cliched by the numbers baseball diamond saga opening with an uptempo version of Take Me Out To The Ballgame over the credits.

It has the customary narrator which has always been a bit of stickler for me. I have to stop and think sometimes, “were audiences really that slow as to have a story teller in so many fifties flicks?” Then again I know the answer is it’s all budget related and helps fill in the gaps that would cost money to film.

Eddie runs the Giants training facility for aspiring young men looking to find their way to the big league. Showing up at camp is a solid third baseman played by Jeff Richards, cocky center fielder William Campbell and as a hot shot pitcher and one of my favorites Richard Jaeckel. Jaeckel would also appear in director Aldrich’s final film in 1981 titled All the Marbles.

When Eddie’s niece and front office gal Vera-Ellen shows up at camp she has about 200 young men all hoping to play more than catch with the only female in the cast.

Training camp gives us curfews, poker games and a pitch by Jaeckel a little too close to Eddie’s liking at the plate. It gives Robinson a chance to get fired up in that Johnny Rocco style the way us fans prefer. Like all training camps there will have to be cuts made and sad goodbyes along the way.

The star player here is Richards and Vera wants him concentrating on the game but alas he has family troubles. Like any good “B” plot it seems his Father thinks his son is off to University to become a lawyer. In the short running time of this baseball programmer Eddie and Vera are going to have to figure a way to ensure he signs with the Giants and bring his old school European Father around to liking America’s favorite past time.

This black and white filler sure feels like a 3D effort from the fifties craze but I couldn’t find anything that leads me to believe that may have been the case. With balls and bats coming at the camera it’s hard not to think that may have been the intention. There’s a world of difference between this film and the subsequent films that Aldrich moved into one year later. Apache, Vera Cruz, Kiss Me Deadly and The Big Knife were his next four features.

It’s rather surprising that Vera-Ellen is in here as the film has none of the dance routines that she was famous for. It’s strictly the bosses niece and the budding ball player romance angle. 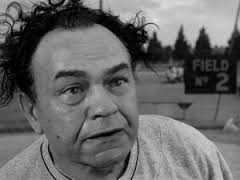 As for Robinson the glory years were past and from our vantage point looking back it’s not much of a role for the iconic tough guy. But on the other hand it’s Edward G. Robinson barking on a ball diamond and that alone commands respect and 71 minutes of my time.