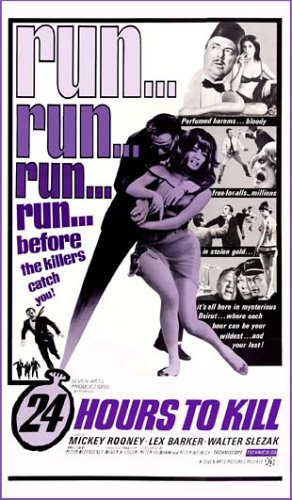 Since his passing last week I have been meaning to dig thru the titles I have starring The Mick. I came upon this flick that paired Mickey Rooney and former Tarzan Lex Barker. Something a little different from a time period where Rooney had aged into a solid character actor.

For this 94 minute euro thriller from producer Harry Alan Towers Rooney stars as a member of pilot Barker’s flight crew who due to a faulty engine have been rerouted to Beirut. From the moment the plane touches down, Rooney is sweating bullets and will be dodging them before long. It seems he has a history with a local smuggling ring led by Walter Slezak. Slezak reminds me a little of Sydney Greenstreet here as he wants a certain shipment returned and isn’t about to let Barker step in his way when it comes to exacting his vengeance on pint sized Mickey.

Overall this is another passable entry in the Rooney canon. Director Peter Bezencenet must have had a heck of a time trying to frame Rooney and Barker when they are on screen together. Rooney’s head appears at the bottom of the frame and Barker must have been slouching trying to keep his head low enough to stay in frame! 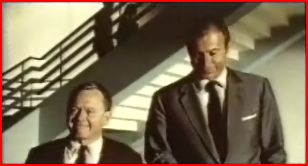 Nice location work here as well during the plane’s stop over as our crew tries to take in the sights while at the same time stay a step ahead of Slezak’s army.

Fans of euro thrillers, Christopher Lee and exploitation cinema should be familiar with producer Towers. He was behind many of Lee’s films including the Fu Manchu series and would be responsible for funding many of Jess Franco’s films over the years. One of this films leading ladies was Maria Rohm who would marry Towers and retire from the acting profession.

Not great but by no means bad. If you have 94 minutes to kill then check out 24 Hours to Kill and appreciate another effort from a Hollywood legend. Alas we don’t have many left.