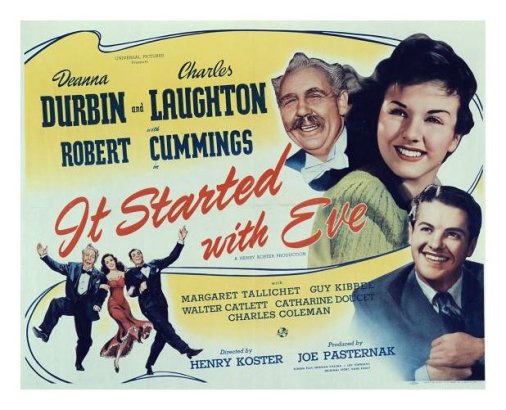 Leading man Robert Cummings is in a terrible situation as this film opens. His millionaire father is nearing death and before he expires he wishes to see his future daughter in law by his bedside. Cummings can’t produce her quick enough and in a panic hires a hat check girl as a stand in to smile at the dying man’s bedside.

So begins a totally enjoyable screwball romantic comedy from the Deanna Durbin library. Deanna plays our hat check girl thrust into a world of the upper class while all the while she is chasing the dream of being a singer in the big city. Cummings changes all that with his plea for help. Wouldn’t you know it his dying father makes a comeback and wants to spend nothing but time with his soon to be daughter in law. 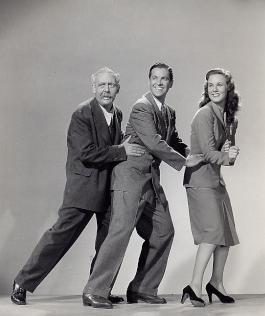 Make no mistake, this film belongs to the father in question. Charles Laughton. His playing of an elderly man is a joy to behold and anyone who knows Laughton knows that he is a first class scene stealer. His interactions with Deanna are the films strong points and can’t help but bring a smile to the viewers face. With Deanna firmly planted in Laughton’s new found zest for life Cummings is falling apart while trying to figure out what to do with his real fiance. Could there be a falling out and a little love for Deanna in his heart? I’m not telling.

This is another Universal release for which Deanna was under contract to and directed by Henry Koster. Also in the credits as the director of photography is Rudolph Mate` who went on to actually direct some pretty solid films including D.O.A and The Violent Men. Fans of both Sherlock Holmes and Charlie Chan films will spot Mary Gordon from the Rathbone series and Mantan Moreland from the later Chan films in minor roles.

For me I can’t say enough about Laughton on this one and really enjoyed his sneaking of cigars from an over protective doctor and his nagging nurse. If that doesn’t bring to mind Witness For the Prosecution than that should be the next film on your must see list. Laughton does it all here from tearful scenes to dancing up a storm in a night club with Durbin. I never stop trying to discover new films and for me this year it looks like the Durbin library has taken the early lead thanks to Kristina at Speakeasy.