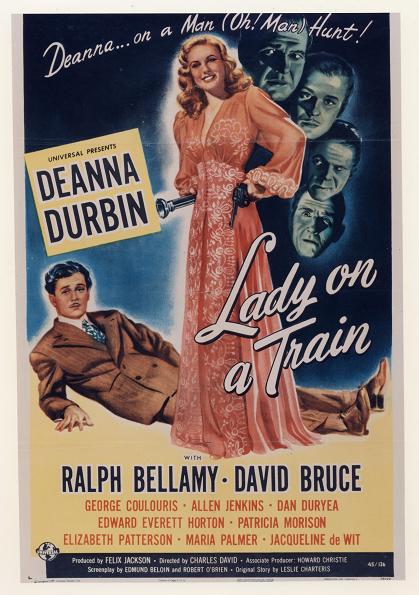 Here’s a genre crossing title from the Deanna Durbin library. We get a musical screwball comedy mixed in with a murder mystery to come up with a pleasurable 94 minutes of fun.

Our leading lady is quite positive she has witnessed a murder from a train window leading her on a madcap ride to prove it. The problem is no one seems to take her seriously from police sergeant William Frawley to mystery writer David Bruce. Inspired by the murder mysteries she enjoys reading she sets out to prove there has indeed been a killing. This leads to a case of mistaken identity and a group of would be inheritors who are a rather peculiar lot including underused Ralph Bellamy and personal favorite, Dan Duryea. Think of Durbin as a Nancy Drew type character following clues till she finds herself in over her head confronting the surprising identity of the killer she seeks to expose. Along the way Durbin gets to sing in a nightclub for her legion of fans and does a wonderful rendition of Silent Night bringing Allen Jenkins to tears. Familiar faces round out the cast including Edward Everett Horton and Samuel S. Hinds. I always find it amazing how many wonderful character actors turn up in films released in the so called studio era.

The film is a fast moving romp that was a popular form of entertainment throughout the 30’s and 40’s where murder mysteries were quite often mixed with meddling young women and newspaper reporters out to prove to the police or a crusty old editor that a crime has actually been committed. The director of the film Charles David only had two films to his credit as director. This and another 1945 release titled River Gang.  This was of course released by Universal Studios whom Durbin was employed with for her all to short film career before retiring at the age of 27. I was aware of her films and the story of her career but until recently hadn’t taken the time to check them out. Kind of glad a friend gave me a nudge.