It’s no secret that Hammer Films made a few Hitchcock styled thrillers in the early 1960’s and although they are on a Hammer budget without Dracula or the Baron, that shouldn’t stop one from enjoying these nifty thrillers. Scream of Fear was penned by Hammer regular Jimmy Sangster and eerily directed by Seth Holt who would go on to do 2 more Hammer thrillers before his untimely death at the age of 47. Unlike the studio’s Gothic horrors this film is in black and white and takes place in present day France where American actress Susan Strasberg stars as Penny Appleby returning to live with her father after a 10 year absence. Due to a fall she is crippled and wheelchair bound. Enter the new stepmother whom she has never met and a corpse that resembles her father showing up in unexpected places. She suspects along with the family chauffeur played by Ronald Lewis that someone may be trying to drive her crazy for the inheritance money she is entitled to if indeed her dear father is dead. With Christopher Lee hanging around as the family physician one can’t be too sure. At 81 minutes the film like most Hammer productions moves quickly and the plot twists over the final 20 minutes are full of shocks and quite surprising as they unfold.

As a Hammer fan I pretty much enjoy everything the studio put out and this one is no different but I have to stress that this is a solid thriller and shouldn’t be missed if given the opportunity to catch it. Hammer King Christopher Lee turns up in a supporting role this time out donning a French accent and doing his best to keep the viewer guessing. If you’re looking to pair this up with another Hammer flick for an effective double feature, go with Oliver Reed in Paranoiac. 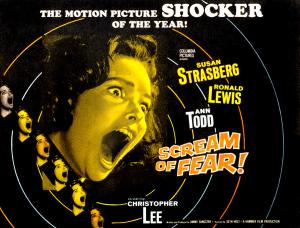