What’s not to like when Franco Nero takes on a Dana Andrews styled role in this Noir mystery that sees Nero (minus the mustache) play a cop on the take who gets tangled up in a murder mystery with plenty of twists and multiple suspects including a trio of women eager to bed him.

With Rome as a backdrop the film opens with the camera looking into an apartment window that sees a man gunned down but not who did the shooting. Cut to Nero meeting with one time Bond villain, Adolfo Celi. Nero’s being paid by Celi to use his badge and see that model, Delia Boccardo, is stripped of her Visa. Celi wants the beauty sent back to England after his son has fallen for her. He doesn’t approve of the match.

Turns out the dead man is connected to Celi and upon a little digging, Nero, will discover that Miss Boccardo was the victim’s mistress. Now Celi wants his son’s name kept out of the papers and while Nero understands he’s also worried that Celi’s son, Maurizio Bonuglia, may in fact be the killer. There’s a nude photograph of an attractive model at the scene of the killing that is the one clue Nero has. The problem is it’s been torn and the head is missing leaving Nero to ponder who is the girl in the photo and what is her part in the murder?

Perhaps Florinda Bolkan playing Celi’s sexy, much younger second wife might know. If not Florinda then how about the blonde haired model, Susanna Martinkova? Maybe she could give Nero a lead. If not a lead then how about an invite to the bedroom. Yes all three of our leading ladies make it quite clear to the handsome cop with a temper that they’d welcome the opportunity if he’s willing. Though he seems tempted he’s also adept at keeping things on a professional level while trying to figure out who pulled the trigger.

Time to rough up the photographer who took the picture. Like many of Noir’s leading men, Nero, isn’t only catnip to the ladies but can lay a beating on those who are holding out on him. Blackmail rears it’s ugly head as the details begin to surface concerning the murder. But who’s doing the blackmailing continues to escape Nero who while playing a cop here under the direction of Romolo Guerrieri comes across as more of a gumshoe in the mold of a Philip Marlowe.

All the while Nero is conducting his own murder case based on his taking money from Celi to keep son Maurizio out of it, the actual murder case is being handled by Renzo Palmer who suspects Nero is somehow involved and knows he’s dirty but can’t quite prove it. Things are going to escalate when the one man Nero is trying to keep out of it is himself murdered. The killings are going to multiply and while I found things getting a might confusing as the final reel approached, I wasn’t surprised at just who the killer was. I based this purely on what I know of the guilty party’s screen persona and what he/she is capable of. On camera that is. 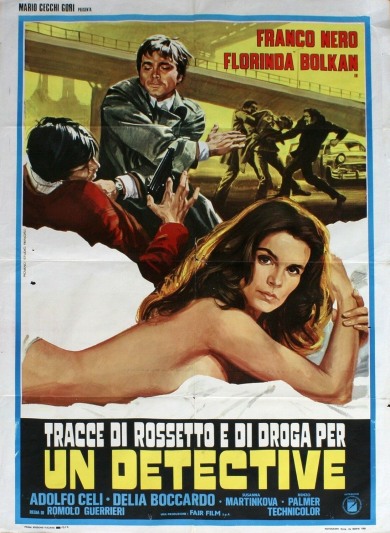 Let’s be frank. Franco Nero is the one and only reason I wanted to watch this film (dubbed) and in the end he’s the one reason I would recommend that you to give it a shot if you can locate a copy. He’s perfectly suited to the Noir genre and leaves me wishing he had come overseas and played a Sam Spade type of role for a major Hollywood production. Nero has in excess of over 200 acting credits to his name giving me pause to realize there is still so much more of his work I’ve yet to see. In part I suppose it’s because of his work overseas and not being made available here in North America in subtitled or English dubs. At present I have only 33 of his films located on the shelf here in the movie room. Many of the westerns and gangster films but I’m open to recommendations if you have any.

While Adolfo Celi is instantly recognizable thanks to Thunderball and turning up in a number of titles I’ve seen, it’s Florinda Bolkan that captures my interest. I know very little of her other than the fact that I loved her role opposite Malcolm McDowell in 1975’s Royal Flash. A film I’ve been a big fan of for more years than I can count having seen it as a teenager. I have seen her in a couple other titles and perhaps that’s all that are really worth seeking out but again recommendations are welcomed.

Detective Belli came into my possession under gloomy circumstances. It had the Ring of Death title on the DVD case but used the alternate title on the actual print. One of the few remaining video stores in my small corner of the world closed down this past year and put it’s entire stock of DVD’s and blu rays on sale. So while I scored some great deals during that closing sale it’s still a bittersweet purchase knowing the death knell was sounding once again for another of the few home video stores that were still standing. Now that I’ve watched the Nero film, I guess maybe it’s time to see the other half of this double feature on the same disk titled Blade. No not the Wesley Snipes vampire hit but rather a cop film starring John Marley …. John Marley? If it weren’t for this purchase I don’t think I’d have ever known the guy with the horse’s head in his bed had ever scored top billing in a feature film.