Directed by John H. Auer, this Noir effort featuring Wendell Corey was quick to remind me that the Massachusetts born actor could do better than just play second banana roles to a larger name on the movie marquee as he was known to do in films like Rear Window and The Rainmaker. 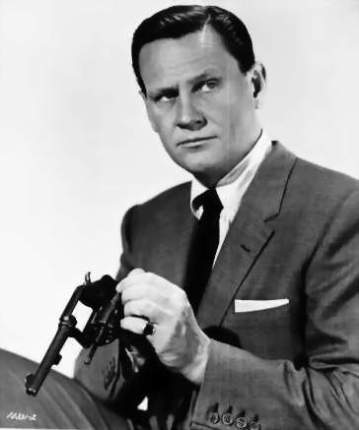 Filmed in Honolulu and photographed in black and white by John L. Russell (Psycho) the film sees Corey getting tangled up in a web of deceit, murder and of course, dames. Complimented by a strong cast, the film will open with Corey’s gal, Nancy Gates, shooting a potential threat to Corey dead in the opening stanza of the film. Corey won’t let her take the rap and turns himself in for the killing to Honolulu police chief, Keye Luke.

With Corey behind bars, his business associate, Philip Ahn, has some eager ideas about the fortune in cash that Corey has stowed away. Enter Evelyn Keyes as a woman who comes across a recording of Corey’s voice. She travels to Honolulu from the U.S. mainland determined to discover if the voice on the recording is the same as the man she married and supposedly lost during the battle of Pearl Harbor. A man who was declared M.I.A. and an American hero. It’s a bit of stretch I know to bring her in to this plot but I have to admit it kind of works.

Ahn quickly proves to be a cold blooded killer. He batters Miss Gates to death looking for information on Corey’s cash and is seen on the property by a just arriving Keyes. For her part Keyes who is new to the islands has enlisted a street smart cabby played by Elsa Lanchester. When Corey gets news of his girlfriends murder, he makes a break from police incarceration to find out who has killed her. He’ll head to what’s known as Hell’s Half Acre. A slum full of crime, prostitution and most any other illegal activity one can come up with in 1950’s cinema. All that plus Marie Windsor.

Windsor should need no introduction as she’s one of Noir’s most memorable femme fatales. Look no further than Kubrick’s The Killing for a prime example.

While it stretches the beleivability of the plot, Keyes, is going to go hunting for her long lost hubby by heading into the title’s territory. It’s here that Ahn will see to it that she’s drugged and kept against her will at the appartment of Windsor and her slob of a husband, Jesse White. When White gets around to the idea of raping her it’s Corey who will step in to save the day. Yeah the plot points are all rather convenient but again, things contuinue to work for me and that’s in large part due to the casting. That includes a fine turn by Leonard Strong who seems to be channeling the great Peter Lorre as he plays a sweaty little weasel in a white suit and hat who sells information to the highest bidder. No matter which side of the law the money is being offered from. 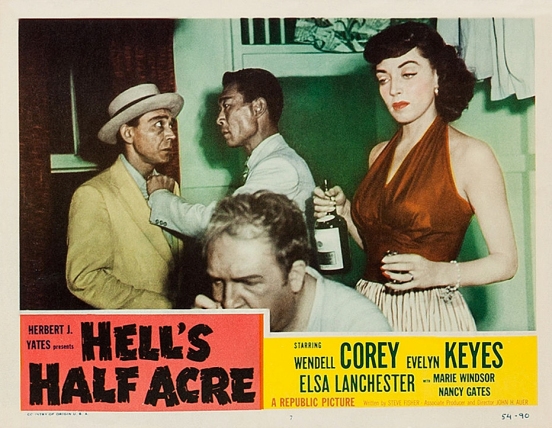 Corey will have his scene with Keyes leaving doubt as to whether he really is her long dead husband. Getting that out of they way it’s back to learning just who killed Gates. For his part, Ahn, wants Keyes dead as she can connect him to the killing. With real money on the line don’t be surprised to see that Miss Windsor is Ahn’s lover behind her hubby’s back. Windsor has always been known to chase the money in her screen roles. It should also be noted that this creates an interracial relationship on camera at a time when that was rarely seen at the movies. 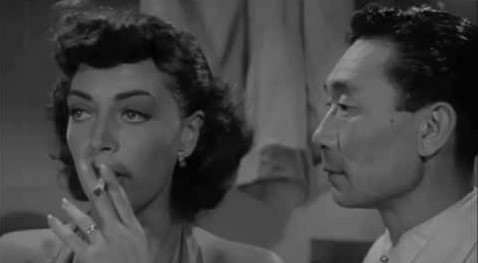 There’s plenty to discover for yourself in this Republic Pictures production from Herbert J. Yates. Thankfully it surfaced on DVD from Olive Films which allowed me to view this for the first time. What stands out the most are the performances. Corey is rock solid as the man with a hidden past looking to right some wrongs. Evelyn Keyes is a good match for Corey in a role that stretches believability but thankfully she plays it straight. Third billed Lanchester’s role is rather small and it’s really Philp Ahn who deserves the number three slot in the opening credits.

Ahn’s performance is dead serious and he comes off as a threatening presence from the moment he appears on screen backing it up by dealing out a number of vicious beatings. Both he and co-star Keye Luke would cross paths on numerous projects over the course of their long careers from films of the 1930’s like Shanghai and The Good Earth to taking recurring roles on David Carradine’s Kung Fu in the 1970’s.

It wasn’t lost on me that Keye Luke was playing the Honolulu Chief of Police. Luke first made his name playing Lee Chan in the early Charlie Chan films of the 30’s opposite Warner Oland. Chan was of course the famous Honolulu detective. I guess Charlie would be proud that his Number One Son made good after all those cases he helped Pop on.

As for the Maytag Man, Jesse White, not the typical role I’d connect him to. Usually he’s a sour, negative minded character tormenting the likes of Jerry Lewis. Here he’s a low life snake that gets caught up in Ahn’s grasp with a wife who’ll sell him out for a sawbuck.

There’s a lot to like here and that’s thanks to the cast should you come across a copy of this Noir thriller with plenty of twists and turns as only Hollywood can write them. And finally Hell’s Half Acre presented one of the most unusual names I’ve seen in the opening credits of a movie. Give a big round of applause everyone to the film’s Technical Advisor, Don the Beachcomber! 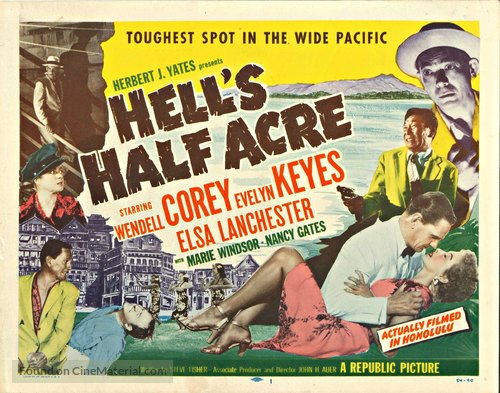