Continuing his long run of westerns, Joel McCrea, heads a roster of well known faces in this sturdy effort from director Joseph M. Newman. One that sees McCrea playing against type as a hardened, battle weary Sergeant in the Union Army who has a deep hatred for the Apache. 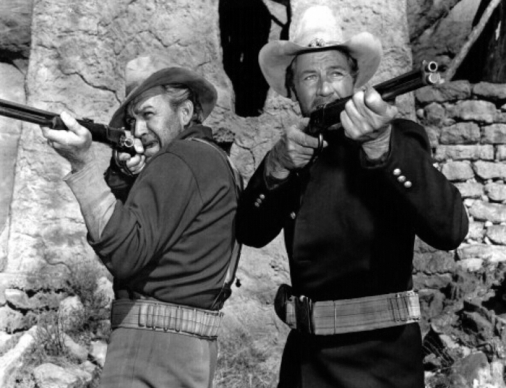 Our story takes place in 1879 beginning with what’s left of a decimated Cavalry Patrol. With no officer surviving, McCrea finds himself leading a ragtag detail that includes Forrest Tucker taking on the Irish brogue duties normally assigned to Victor McLaglen in cavalry pictures. Also in the bunch you’ll recognize Denver Pyle, John Russell, Robert Osterloh and as an Indian scout, Anthony Caruso. The goal is to survive the harsh desert surrounding them and the Apaches on the warpath. In order to make it back to the company Fort, McCrea will lead the troops through a desert stretch that Military protocol usually avoids.

McCrea isn’t well liked by the troop and they figure he’s going to get them all killed in his quest for violence and revenge. A back story will come to light that his wife and children were murdered in an Apache raid. When one of their own dies from wounds sustained in battle and the group want to see to a proper burial, McCrea, states rather coldly, “If he needs our help to make it upstairs he’s in worse shape than he looks.” 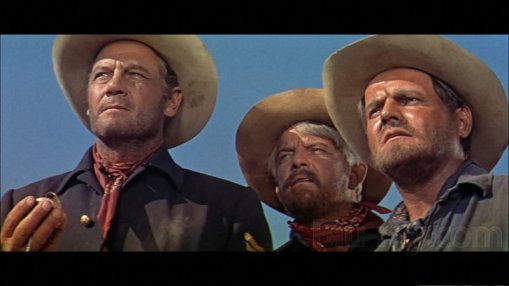 Hell of a line for my money in the script credited to Martin Goldsmith. The writer’s best known story is probably the Noir classic The Narrow Margin made in 1952 and subsequently remade in 1990. He’d follow up this western working again with both the director, Newman, and McCrea on the 1959 western The Gunfight at Dodge City.

The first serious exchange as they work their way back to the safety of the Fort takes place at a watering hole that the Apaches currently control. This proves to be a violent exchange that will expose McCrea as a man capable of savage atrocities. It’s not quite Henry Fonda gunning down little Timothy McBain but it is rather shocking to see the usually heroic McCrea raise his rifle and murder an unarmed warrior who is clearly raising his hands in a surrendering motion. 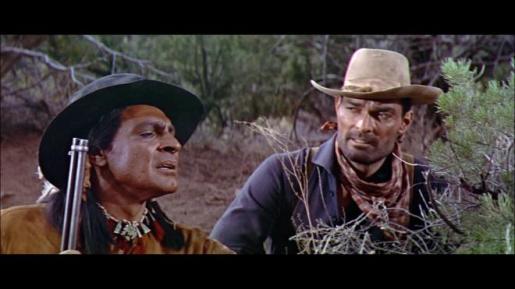 This latest battle leaves the troop numbers dwindling down to the name actors. Among them Denver Pyle has sustained a head wound and will become the subject of arguments over whether or not to be left behind as he is holding up the march. One relationship in the film that adds a different angle to the proceedings is allowing Indian scout Caruso to be more than a cliché by giving him a buddy/buddy relationship with Irishman Forest Tucker.

The most level headed soldier in the troop is portrayed by John Russell who will serve a McCrea’s confidante. One who sees both the good and the evil within McCrea. A man he struggles to accept as a commander when he sees the unnecessary violence he’s capable of. McCrea and his troop will take refuge in the stone walls of an ancient cliffside settlement where the plot will inject a female character in our story. It’s “B” film favorite Susan Cabot as a Piute Indian who they find alongside her father, Francis McDonald. Though they may be peaceful and mean the troops no harm, McCrea, wants them watched and will not allow them to leave the stone refuge while they await the arrival of the Apache warriors. 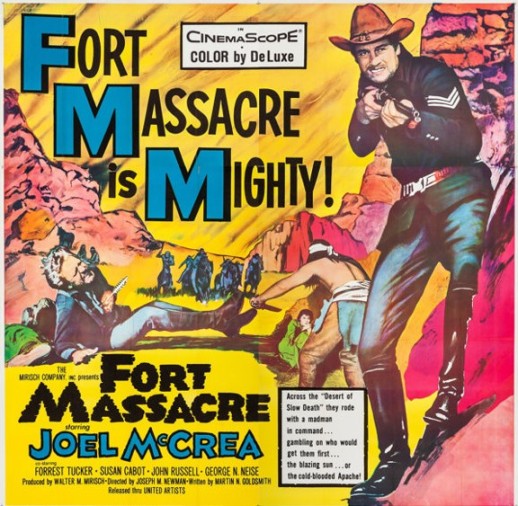 Still to come is another violent standoff before the film closes out at the 81 minute mark.

Well made and compact with a notable leading western figure in the lead, I couldn’t help but be surprised at the violence aimed at the Apache in the film. No doubt the filmmakers wanted McCrea to come across as vengeful and sure I’ve seen my share of westerns where Indians were presented as the antagonists but this effort turns that upside down. Anytime there is a skirmish caught on camera, it’s McCrea who is clearly the heavy even if the script has attempted to give us a reason as to his mental state. 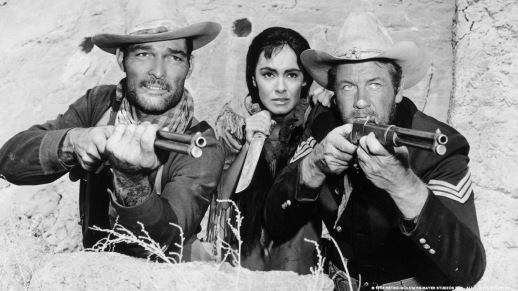 Thankfully the script doesn’t fool itself into making him out a hero by incredibly finding the love of a Piute woman. Instead it will use the Russell character as not only his conscience but also to serve as the man who will judge him for his sins.

On that cast of familiar faces, you might know them from both movies and television roles. Denver Pyle scored an amazing number of credits but may be best remembered for playing Uncle Jesse in the Dukes of Hazard though I prefer to recall his stint as Briscoe Darling on The Andy Griffith Show or as the stone faced Frank Hamer in Bonnie and Clyde. 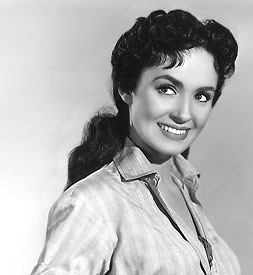 Among cult sci-fi fans, Miss Cabot, is probably best known as 1959’s The Wasp Woman for Roger Corman. Western fans should all know Golden Boot Winner, Forrest Tucker, for his long association with the genre from movies to F-Troop on TV. Then there is one of my favorite character actors, Anthony Caruso, who you can learn more about in an earlier feature I was fortunate enough to have published by clicking the link attached to his name.

Following WW2, McCrea, would only make one non-western (Rough Shoot) between 1946 and 1962 when he took a break from movie making and for all intensive purposes retired aside from three minor titles in the 1970’s. Fort Massacre has turned up on blu ray from the fine folks at Kino Lorber who thankfully continue to resuscitate titles from the past should you be looking to add this one to your collection. 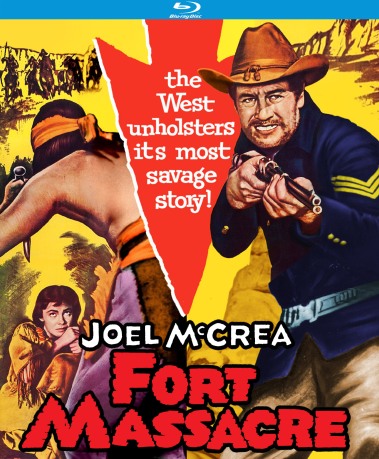